Why the Candidates Aren't Talking About Cutting Federal Spending Anymore

If Donald Trump has any interest in cutting federal social programs, he certainly hasn't made it a significant part of his campaign.

In fact, it's likely safe to say that a large part of Trump's appeal to many of his supporters is the fact Trump has not said anything about substantial cuts to Social Security, Medicare, or low-income welfare programs.

After all, social benefits programs are immensely popular with Americans as one Pew study showed:

[I]n 2013, when Pew surveyed Americans as to which government programs should be cut, lopsided majorities opposed any cuts to Medicare or Social Security. When asked what programs should be cut as part of budget negotiations in DC, 87 percent of respondents opposed cuts to Social Security, while 82 percent opposed cuts to Medicare. (The popularity of these programs extends across Republicans, Democrats, and unaffiliated voters.) ...

Pew reports that 71 percent of Americans are opposed to cuts in "aid to needy" (i.e., Medicaid, TANF, etc).

Many older voters — who have higher turnout than younger voters — like to pretend that their Social Security and Medicare programs are just a matter of "getting back" what they "paid in" but the reality is that many Medicare recipients get back more than three times what they pay in, and most Americans who receive old-age benefits get more back than what they paid in overall. These voters aren't about to turn down that sweet deal no matter how many extra hours of work it means for junior.

Looking over the landscape of the 2016 election, one is truck by how little talk there is of budget cutting at all. Even attacks on welfare have largely been limited to attacks on welfare for illegal aliens and other groups deemed to be insufficiently American. This year, the election virtually ignores economics while focusing on cultural issues related to immigration, accusations of racism, religion, and sex.

Americans may go to the ramparts over whether or not transgender bathrooms should have signs in English and Spanish, but we can all agree that no president better touch our government pensions. In other words, the general position appears to be that social spending is as American as apple pie. It's just important to make sure only the real Americans get some of it.

In this, Trump has perhaps taken cues from the Republican establishment which figured out long ago that running on a campaign of cutting social programs is a fool's game. After losing two national elections in the 1990s, the Republicans nominated the candidate of "compassionate conservatism," George W. Bush. The phrase was meant to send the message that Bush had little interest in any big cuts to social benefits. Bush would then go on to campaign for the largest increase in welfare spending since the Great Society when he supported the expansion of Medicare.

Mitt Romney, on the other hand, never managed to come up with a palatable message on social benefits. He flip-flopped around a bit on the issue, but ended up giving most voters in the impression that he wanted to cut benefits. This impression may have been helped along by the fact that Romney did in fact call for cutting Social Security and Medicare at CPAC in early 2012.

Not surprisingly, Romney lost handily in the 2012 election.

Why Republicans Can Win Statewide Election but not National Elections

The popularity of these national programs partly helps to explain why conventional Republicans are at such a disadvantage in the presidential elections. Due in part to a perception that Democrats are better for social benefits programs, Democrats begin every presidential election with an advantage in the electoral college. The social-benefits issue helps Democrats in the old rust belt (including Pennsylvania), New England, the western Great Lakes states, and even in Iowa. Many of these areas tend to be socially conservative, pro-gun, and religious, but in national elections, they lean Democrat. 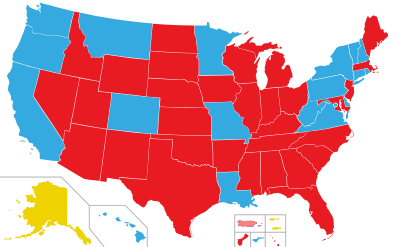 But, that's not likely to happen.

Part of this can be attributed to the fact that most gubernatorial races occur in mid-term years when there is no presidential election. In those years, voter turnout tends to be lower. It's debatable as to whether or not lower turnout necessarily favors the Republicans, but the fact remains that a different and smaller group of people is voting in the off-year gubernatorial elections than is voting in the presidential elections. One might suspect, however, that a larger turnout would tend to favor broadly popular social benefits programs.

But another reason for the relatively high level of success of Republicans is due to the fact that statewide elections tend to not focus on national-level social benefits. Many gubernatorial candidates, for example, can run on tax-cutting and anti-government-spending platforms because at the state level, these positions do not impact federal social benefit programs (although they may affect Medicaid to a degree). Moreover, US Senate races are often driven by local issues such as farm subsidies and highway construction.

But in almost any election for a constituency larger than a US House district, being opposed to social-benefit spending becomes a big political problem.

George W. Bush realized this when he launched his "compassionate conservatism" campaign, and Trump has likely figured this out with his welfare-neutral campaign.

The Budget-Cutting Issue Is Dead

What all of this tells us is that budget-cutting is dead as an important political issue. It's rare to hear either major-party candidate in this election say anything at all about cutting government spending or balancing budgets. Trump has unconvincingly claimed that he can cut the national deficit by selling off some government assets. But he certainly hasn't been talking about cutting benefit for voters. Old-age programs have long been sacrosanct, but, as Will Marshall at The Hill noticed, no one's even talking about welfare reform anymore. It's simply become a non-issue for most voters.

There seems to be a lingering belief among some libertarian-minded Republicans and others that deep down, people care about these issues. Unfortunately there's little evidence that this is so. The only thing that will change this is an ideological shift. But that takes time, energy, commitment, and convincing arguments. Few are interested in that sort of grueling work.

Meanwhile, the current policy of monetizing debt, and kicking the can down the road for a future generation to deal with has appeared to work well enough since Reagan went on a deficit-spending binge unparalleled in peace time. Back in the 1990s, we heard a lot about the dangers of a massive budget deficit. Since then, though, the voters appear to have lost interest.

Ryan McMaken is the editor of Mises Wire and The Austrian. He is the author of Commie Cowboys: The Bourgeoisie and the Nation-State in the Western Genre. Contact: email; twitter.