Which US States Are the "Moocher" States? | Mises Wire
Skip to main content

GET NEWS AND ARTICLES IN YOUR INBOXPrint
A
A
Home | Wire | Which US States Are the "Moocher" States?

Which US States Are the "Moocher" States?

Since Donald Trump's election, some leftists have been trotting out analyses showing that many states that voted for Trump are also states where federal spending plays a disproportionately large role in the statewide economy. In other words, many of those states that talk a lot about states rights and less federal government — it is pointed out — also receive an especially large amount of federal spending in that state.

In many cases, this claim is correct. As this mises.org analysis shows, many states within the Trump heartland are what many might call "moocher states" because the residents there — taken overall — receive more in federal spending than is paid in federal taxes: 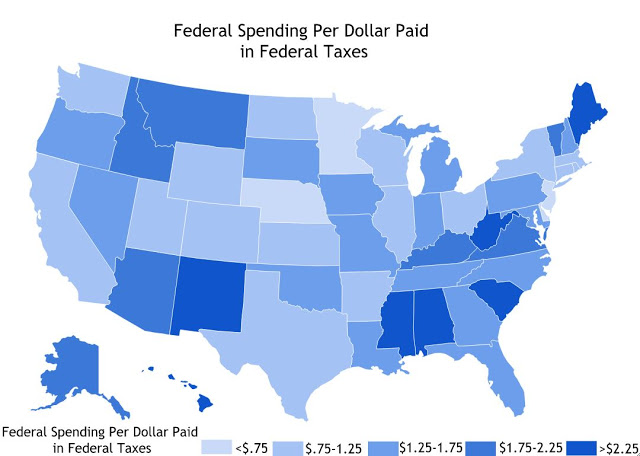 The second graph shows the specific amount of federal spending that goes to each state for each dollar spent: 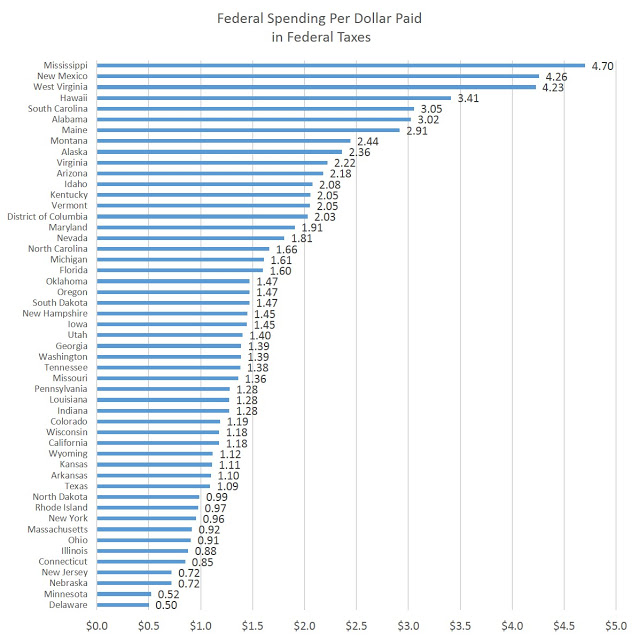 (For more on sources, see here.)

For the charge of hypocrisy to stick against the Trump voters in these states, however, we'd have to show that the people who complain about too much federal government are the same people who receive lots of federal largesse. That's surely true some of the time — as in the case of many conservative seniors on Social Security and military personnel who live off the taxpayer dime. But, there are also surely many residents of net tax receiver states — such as Mississippi — who also are net taxpayers who do not receive a net benefit from federal spending.

Moreover, it's important to understand why some states are more prone to being net recipients of federal spending than others.

Fortunately, Antionio Cheves at American Thinker has added additional analysis to the mises.org article on this topic. Chaves writes:

The most straightforward methodology for measuring “federal dependency” of states was presented by Ryan McMaken in the Mises Institute blog. Based on “federal spending per dollar paid,” business-friendly states like Texas and Utah among the net recipients of federal funds. McMaken attributes the federal budgetary shortfall in states like these to differences in urbanization and federal land ownership.

Regression analysis supports McMaken’s assertion that federal land ownership and urbanization play a large role in determining federal spending per dollar paid (Fig. 1 and 2). He rightly points out that urban economies generate more revenue than agriculture and federal monetary policies (such as low interest rates) favor urban investors at the expense of the “main street” households that predominate in rural states. Census data indicates that demographic differences (particularly differences in formal education) may also contribute to this disparity between urban and rural states.

Formal education is correlated to federal spending per dollar paid (Fig. 3 and 4). This is unsurprising because adults lacking a high school diploma or a college degree usually pay less taxes and consume more in federal nonretirement benefits like Medicare, food assistance, and unemployment. What is particularly noteworthy is how disproportionately college graduates are distributed between urban and rural states (Fig. 5). This no doubt contributes to the federal budgetary shortfall observed by McMaken in many of the less urbanized states. It is also worth noting that nine of the ten states with the lowest percent of college graduates all voted for Trump and that all of the ten states with the highest percent of graduates voted for Clinton in 2016.

Not surprisingly, states with lots of millionaires and billionaires produce more tax revenue, thus moving those states in the direction of being net taxpayer states.

As with so many comparisons of this sort, there is no one way to do this analysis. But, some methods are certainly better than others. One of the most misleading and crankish methods is the one which looks at federal spending compared to state tax revenues.

This method claims that, when federal revenues are large compared to state revenues, the state is "dependent" on federal funds. This method can be contrasted with the mises.org analysis in which we compare federal spending to state GDP or to federal taxes paid in that state.

The method of comparing federal spending to state revenues has been used in often-cited analysis conducted by Wallethub and the Tax Foundation. The Wallethub analysis was used by The Atlantic to make the point that Texans are a bunch of moochers compared to the Californians. Although, as our own analysis shows, Texas ranks slightly better than California in this regard.

Economist Dan Mitchell has attacked this method, and zeroes in on the Tax Foundation's method, using their map: 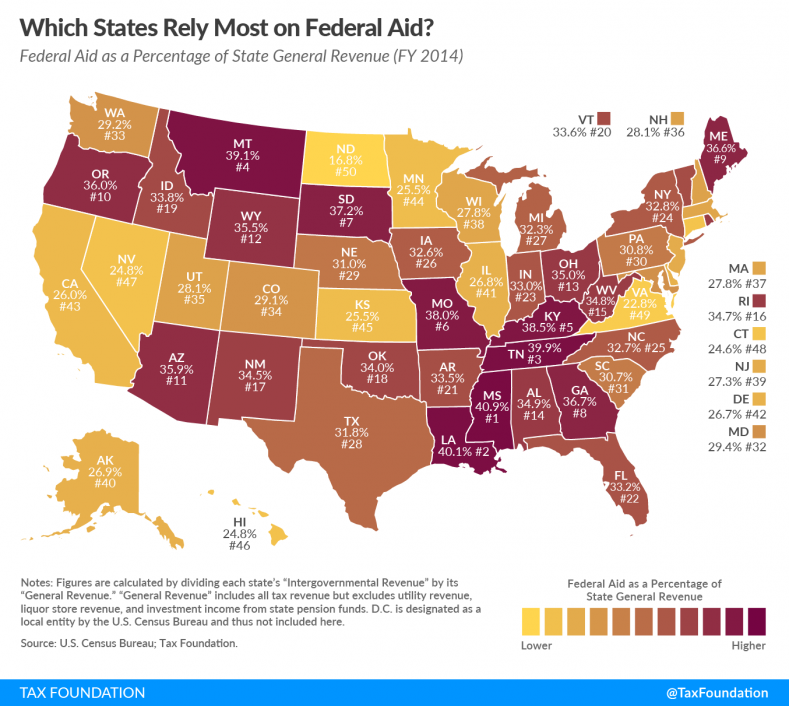 [I]t’s also important to remember that the map is showing the relationship between state revenue and federal transfers. So if a state has a very high tax burden (take a wild guess), then federal aid will represent a smaller share of the total amount of money. By contrast, a very libertarian-oriented state with a very low tax burden might look like a moocher state simply because its tax collections are small relative to formulaic transfers from Uncle Sam.

Indeed, this is a reason why the state with best tax policy, South Dakota, looks like one of the top-10 moocher states in the map.

A more even-handed analysis, it would seem, would compare federal spending to the overall size of the economy and to federal tax revenues. Moreover, there are other factors which complicate the comparisons, such as the fact that California exports its poor to Texas and other low-cost states.