GET NEWS AND ARTICLES IN YOUR INBOXPrint
A
A
Home | Wire | What Determines a Currency Exchange Rate?

What Determines a Currency Exchange Rate?

But, a currency exchange rate appears to be moving in response to so many factors that it makes it almost impossible to ascertain where the exchange rate is likely to be headed. 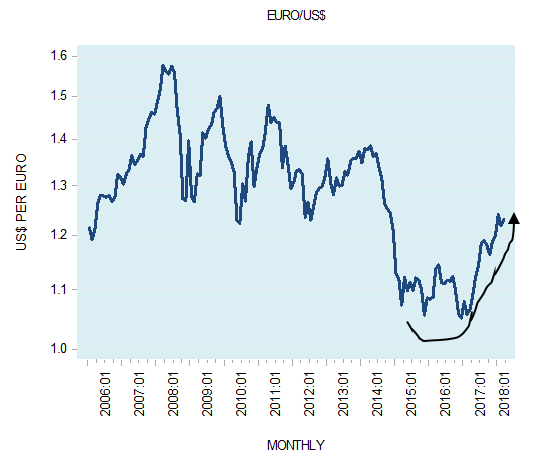 Rather than paying attention to the multitude of variables, it is more sensible to focus on the essential variable.

An important factor in setting the purchasing power of money is the supply of money. If over time the growth rate in the US money supply exceeds the growth rate of European money supply, all other things being equal, this will put downward pressure on the US dollar versus the euro.

Since a price of a good is the amount of money per good, this now means that the prices of goods in dollar terms will increase faster than prices in euro terms, all other things being equal.

As a result, an identical basket of goods is priced now; let us say at two dollars, as against 2.5 euro. This would imply that the exchange rate between the US dollar and the euro would be now 1.25 euros per one dollar.

When money injected into the economy it starts with a particular market before it goes to other markets – this is the reason for the time lag.

When it enters a particular market, it pushes the price of a good in this market higher – more money spent on given goods than before.

This in turn means that past and present information about money supply can be employed in ascertaining likely future moves in the currency exchange rate.

The Demand for Money

Likewise, the demand for money is going to increase because of a general increase in prices of goods and services.

Various factors, such as the interest rate differential, can cause a deviation of the currency rate of exchange from the level dictated by relative purchasing power. Such deviations, however, will set corrective forces in motion.

Let us say that the Fed raises its policy interest rate while the European central bank keeps its policy rate unchanged.

We have seen that if the price of a basket of goods in the US is one dollar and in Europe two euros, then according to the purchasing power framework the currency exchange rate should be one dollar for two euros.

As a result of a widening in the interest rate differential between the US and the Euro zone an increase in the demand for dollars pushes the exchange rate in the market toward one dollar for three euros.

This means that the dollar is now overvalued as depicted by the relative purchasing power of the dollar versus the euro.

We have seen that the interplay between the supply and the demand for money sets a currency purchasing power, which in turn determines its exchange rate against the other currency.

The difference between the excess money growth differential of the US and the EMU sets the underlying exchange rate of the euro in terms of the US dollar.

For example, after closing at 12.5% in August 2011 the difference between the excess AMS growth differential of the US and the EMU settled at minus 8% by February this year.

A visible downtrend in the difference implies a relative underlying strengthening in the purchasing power of the US dollar against the euro. (Relatively to demand for money the growth rate of money supply in the US is much weaker than in the EMU). This in turn raises the likelihood that as time goes by the US dollar should strengthen against the euro. 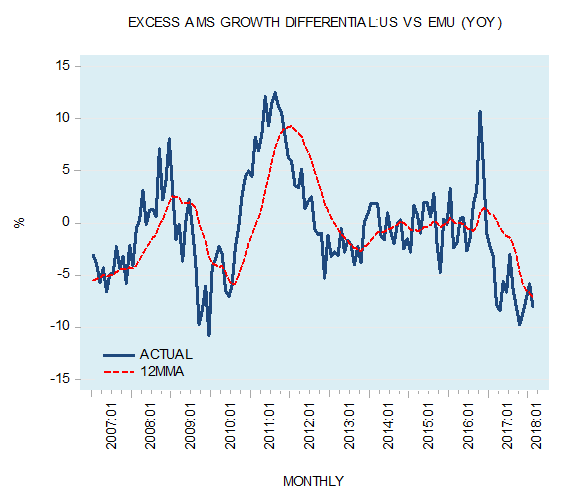 This Professor Hates the Austrian School. But He Clearly Doesn't Know Much about It.

Larson's principal targets are Friedman and Hayek, but Mises and Rothbard are not spared. For Larson, promarket economists aren't just wrong. They're bad people.

This is not a strong economy, it is a disaster waiting to happen as inflation remains elevated. Even the Federal Reserve now admits inflationary pressures are “persistent.”

Contrary to popular thinking, there is no such thing as a price level that should be stabilized by the central bank...

"Idle Resources" Are Problems Caused by the Central Bank

It is not possible to replace productive credit by means of the easy monetary policies of the central bank. If this...