The US National Debt Load is Second-Worst in the World

The US Office of Management and Budget last month released its latest numbers of US federal debt as a percentage of gross domestic product. According to the OMB, the federal debt is now at 100 percent, which makes it similar to debt levels reached during the aftermath of the second world war when the US was still dealing with its massive war debt.

Indeed, since 2008, federal debt levels have been at 50-year highs and at levels one would expect from a country in crisis or at war: 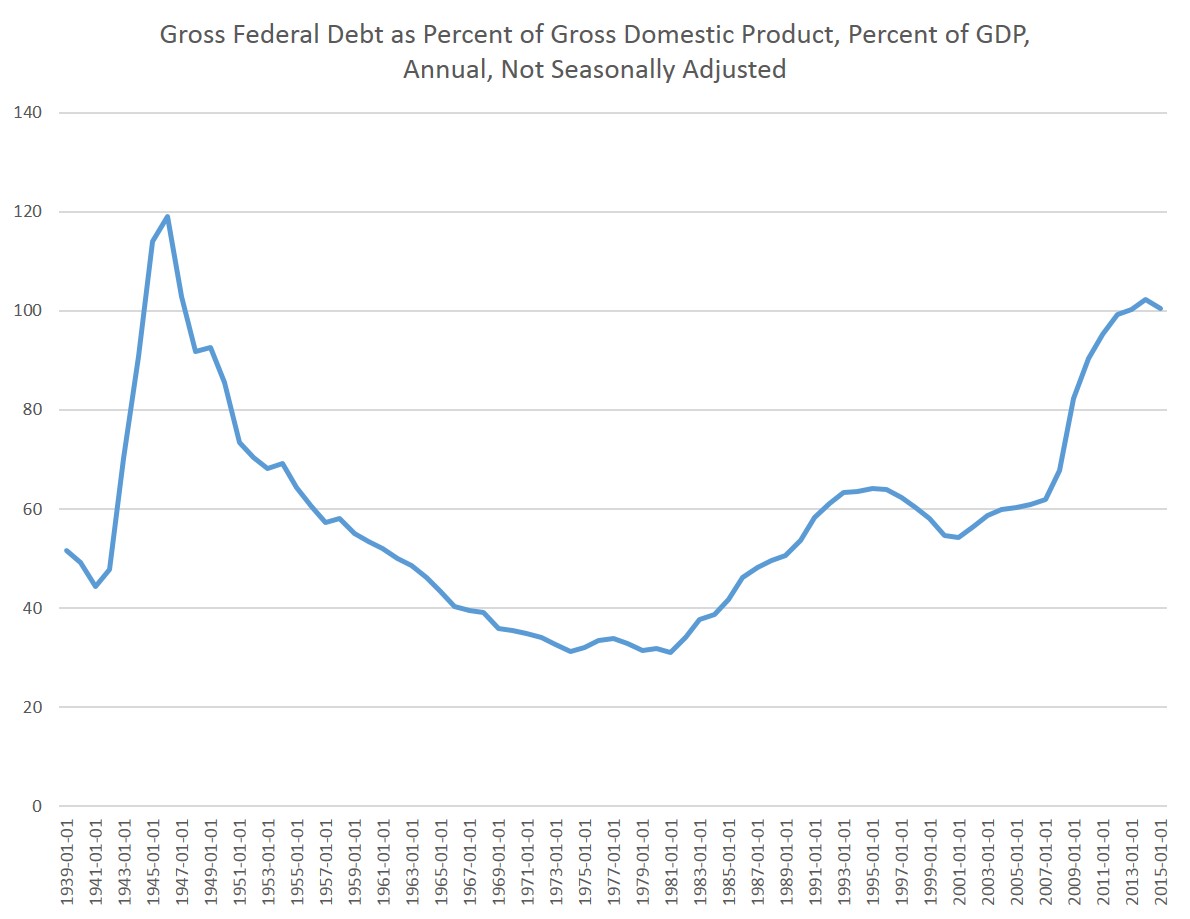 Defenders of deficit spending, however, claim that 100 percent of GDP is not particularly alarming, and some point to the fact that, in comparison to other wealthy nations, a debt level of 100 percent is not anything special. For example, if we use the World Bank's data on central government debt, we find that the US falls below Japan, Italy, and even the UK:

While Japan, Greece, and Portugal all certainly have their budget challenges, the deficit-spenders say, none of these places are on the verge of collapse. Moreover — it is often pointed out— the US benefits from the fact that it controls the global reserve currency and can thus monetize its debt more freely than other states. 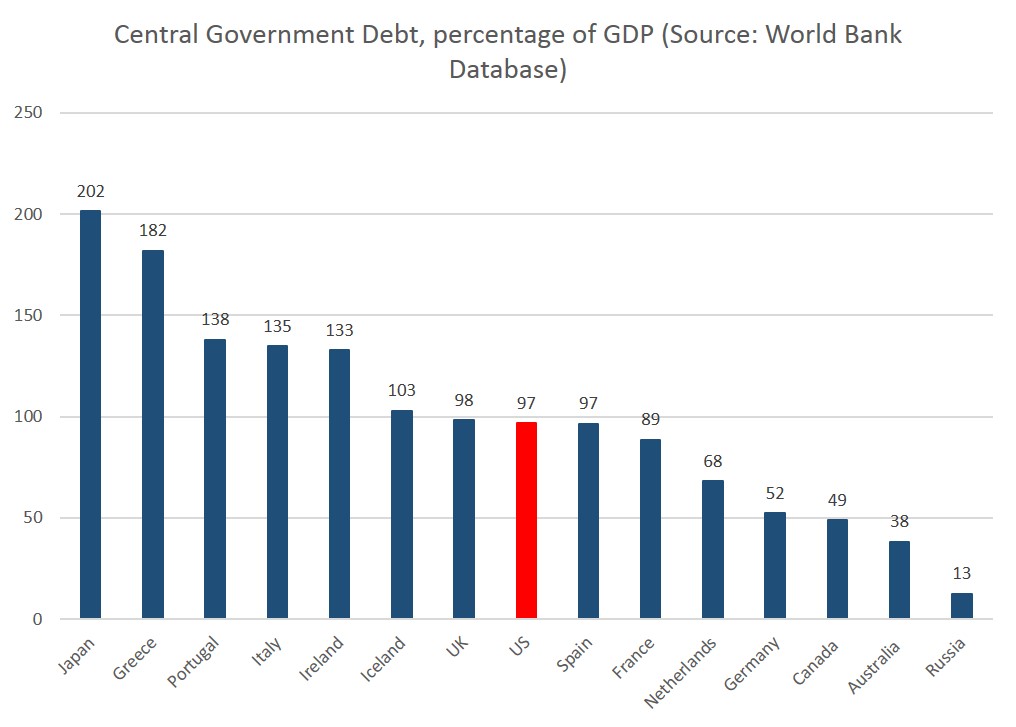 Soothe-saying comparisons to places like Japan and Italy are becoming less convincing as time goes on — considering the flat-lining economy in Japan and the looming banking crisis in Italy — but the claim nevertheless persists that the US is not exactly first in line when it comes to debt loads. As long as Portugal and Italy appear stable, it seems, the US has little reason to worry.

But, there is a problem with this measure.

Calculating debt levels as a percentage of GDP don't really tell us all we want to know about a state's ability to manage debt.

If we want to know the extent to which a debt load is concerning, we must look instead at a state's revenue, rather than just its GDP.1

When we make comparisons of debt as a percentage of tax revenue, the US is no longer in the middle of the pack. Now, the US has the second-largest debt in the world: 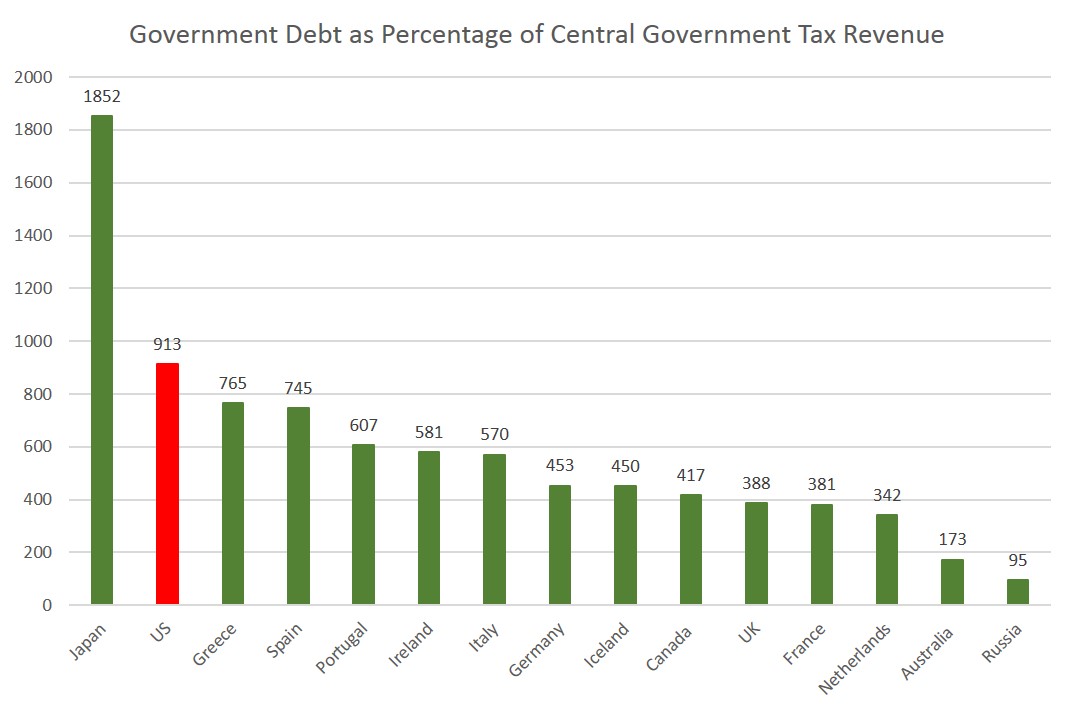 Why We Need to Look at Tax Revenue

Looking at debt in terms of government revenue is key because GDP does not really reflect all the resources to which governments have access. After all, only totalitarian states have direct access to nearly all resources produced by an economy. (Even in totalitarian economies, there are black markets.) That is, only a portion of GDP can be used by states to make debt-service payments.

Moreover, attempts to increase revenue — i.e., raise taxes — come with both political and economic downsides. Not only is raising taxes politically unpopular, but the act of collecting more revenue can actually cause economic growth and GDP to go down, since taxes act as a disincentive for economic activity.

As powerful as they are, states are constrained in their ability to raise taxes at will, and even if they gain the political will, raising taxes doesn't mean more revenue will be collected. Thus, GDP by itself cannot really tell us how feasible it is for a state to handle its debt loads.

Government Revenue, not Assets, Are most Important

Also implausible is the claim that the US government could simply sell off assets to pay off its debt.

The Trump campaign, for example, has made this claim, and has even claimed Trump could pay off the $19 trillion dollar national debt (not including unfunded commitments to programs like Social Security, apparently) by simply selling off national forest land, and other assets. Even if Trump were able to unilaterally sell off all this land, the US government's land assets total only about one to three trillion dollars. As explained here, selling off gold assets — assuming they exist — wouldn't go very far either.

But, of course, the whole idea is pure fantasy. Were the US to attempt to sell off its assets — especially the more valuable land that isn't a salt flat in Nevada — it would be met with immense political opposition. The opposition wouldn't just come from hard-core environmentalists, but would come also from right-wing sportsmen and middle-class types who have become accustomed to using public lands. Moreover, ranchers who have become used to cushy leases with federal agencies would also resist.

There is also about a trillion dollars more in land and equipment controlled by the US military. Will Republicans line up to sell off military bases and equipment? That's seems unlikely.

Thus, the US is not going to be paying off its debt by selling assets.

That leaves us with tax revenue (and monetary inflation) as our only reliable means of dealing with debt.

When we make a revenue-based comparison, we find that the US is, in fact, a world leader in debt among wealthy nations. Moreover, a cause for concern is the fact that any attempt to raise taxes would likely disrupt an already shaky and lackluster economy. If the Federal Reserve is too afraid to even raise the target rate to 0.75 percent, it would seem unwise to raise taxes to address the national debt.

If the US can't raise taxes, and it can't sell off assets, what can it do?

In theory, of course, the US can maintain a large debt indefinitely. Nowadays, interest on the debt is "only" six percent of the federal budget. But, what happens when interest rates must increase? Unfortunately, the low-interest situation is not likely to last forever, and foreign governments are already selling off US debt, suggesting a slow decline in interest for US debt. All things being equal, this would mean the US will eventually have to pay more in interest on its debt to attract investors. When that happens — and a larger share of the US federal budget must then go to interest payments — what federal programs will be abandoned so the US can devote greater portions of the budget to interest payments? Politicians and their constituents won't want to abandon any of them.

That's where the central bank comes in.

Rather than cut back on its commitments to holders of US debt, social security recipients and others on the US dole, the US will simply inflate the money supply to make all its payments in devalued currency. Many taxpayers won't understand what is happening — and the politicians know this — which is why policymakers prefer monetary inflation to raising tax rates.

With a debt load already many times larger than its revenue stream, the US faces a choice: repudiate the debt or make massive cutbacks in government programs. With baby boomers retiring and demanding their welfare programs more than ever, few will bet on the latter.

Instead, the US will repudiate its debt by continuing to pay off its debt in devalued currency. The process has already begun and is likely to continue.

Ryan McMaken is the editor of Mises Wire and The Austrian. He is the author of Commie Cowboys: The Bourgeoisie and the Nation-State in the Western Genre. Contact: email; twitter.