GET NEWS AND ARTICLES IN YOUR INBOXPrint
A
A
Home | Mises Library | The Good Ol' Days: When Tax Rates Were 90 Percent

The Good Ol' Days: When Tax Rates Were 90 Percent 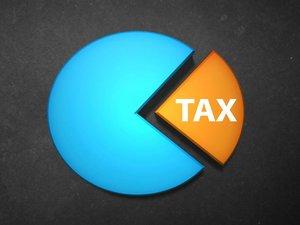 It’s quite interesting indeed when both progressives and conservatives seem to be nostalgic for those good ol’ days in the 1950s, for different reasons, of course. Conservatives want to go back to the nuclear Leave It to Beaver family and what not while liberals like to talk about those 90-percent tax rates that we owe our prosperity to. Or something like that. We’ll focus on the latter for the time being.

Bernie Sanders noted that “When radical, socialist Dwight D. Eisenhower was president, I think the highest marginal tax rate was something like 90 percent.” Paul Krugman said the same thing as did Michael Moore in his film Capitalism: A Love Story and you’ll see this factoid repeated on countless memes floating around the Internet.

However, what a tax rate is and what is actually paid are two very different things. Indeed, in 1955, the only people paying 90 percent (actually 91 percent) were those making over $3,425,766 when adjusted for inflation. And these are marginal rates, so they only paid that on any earnings above that threshold.

Tax law has changed a lot over the years. As you can see by looking at the top marginal rate versus the inflation-adjusted top income bracket for those filing jointly from 1950 until 2013: 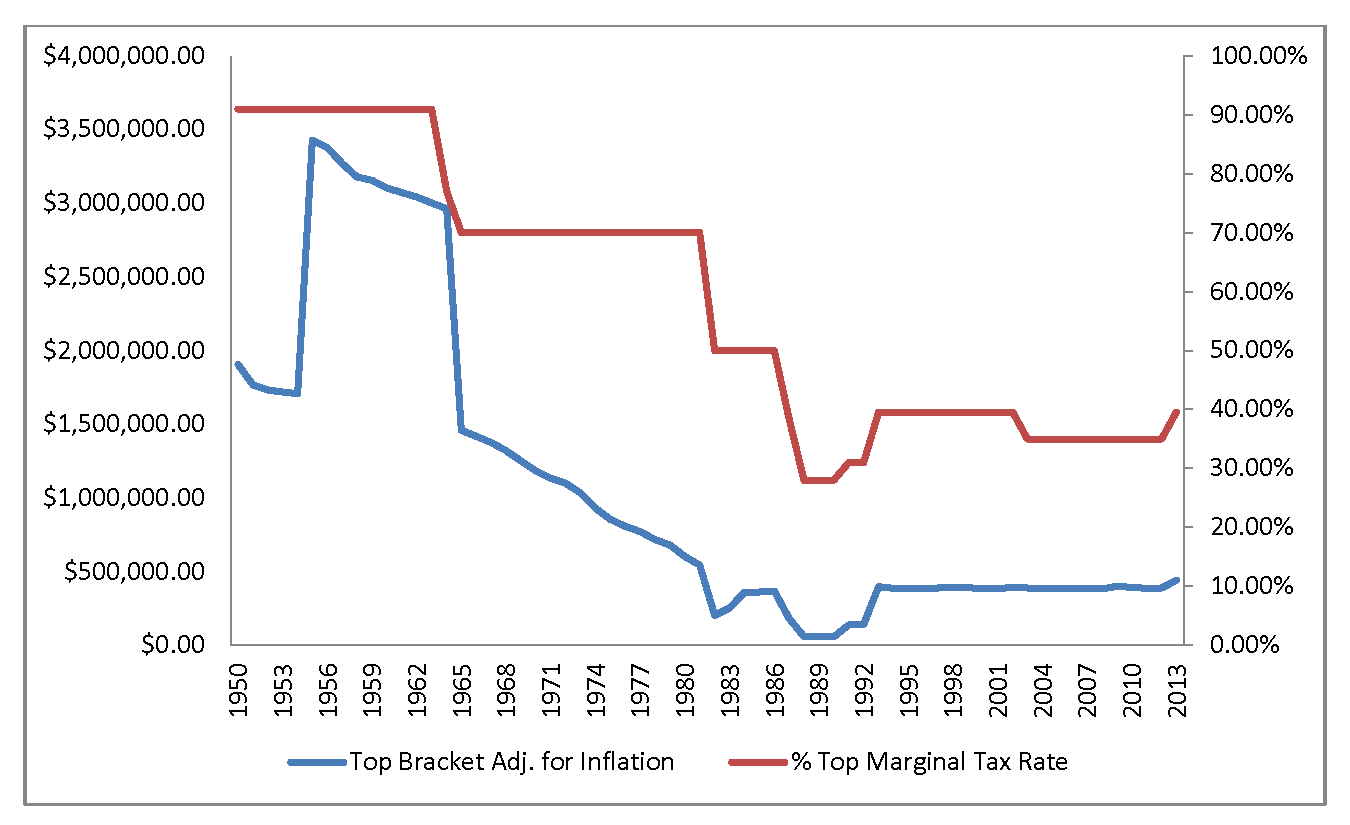 Regardless, one should ask how much the rich were actually paying. It should be noteworthy that back in the 1950s, the government wasn’t actually collecting any more in tax revenue as a percentage of GDP. There’s something called Hauser’s Law, which basically states there is a maximum threshold on how much the government can tax out of its population. I think this “law” is no such thing. If the government really wanted to expropriate more, it could do so. But Hauser’s Law based on the fact that in pretty much every year since 1950, the government has collected between 17 to 20 percent of GDP in taxes. Here are the government tax receipts compared to the top marginal tax rate: 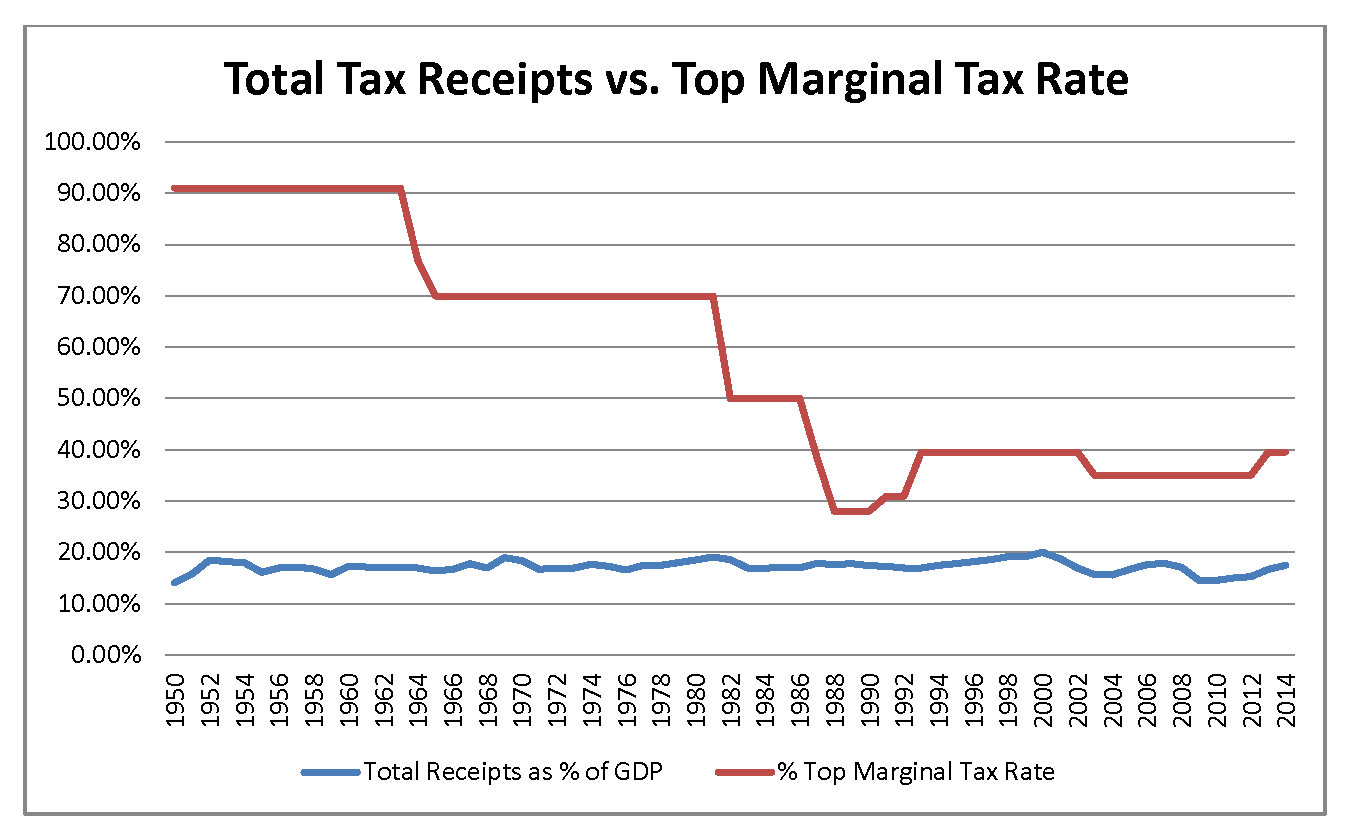 As you can see, no matter what the rate has been, the tax receipts have pretty much been the same. Whether or not you can raise the amount collected is really immaterial here, the only thing that matters is what has happened (particularly when tax rates were over 90 percent) and it’s pretty much always been the same. 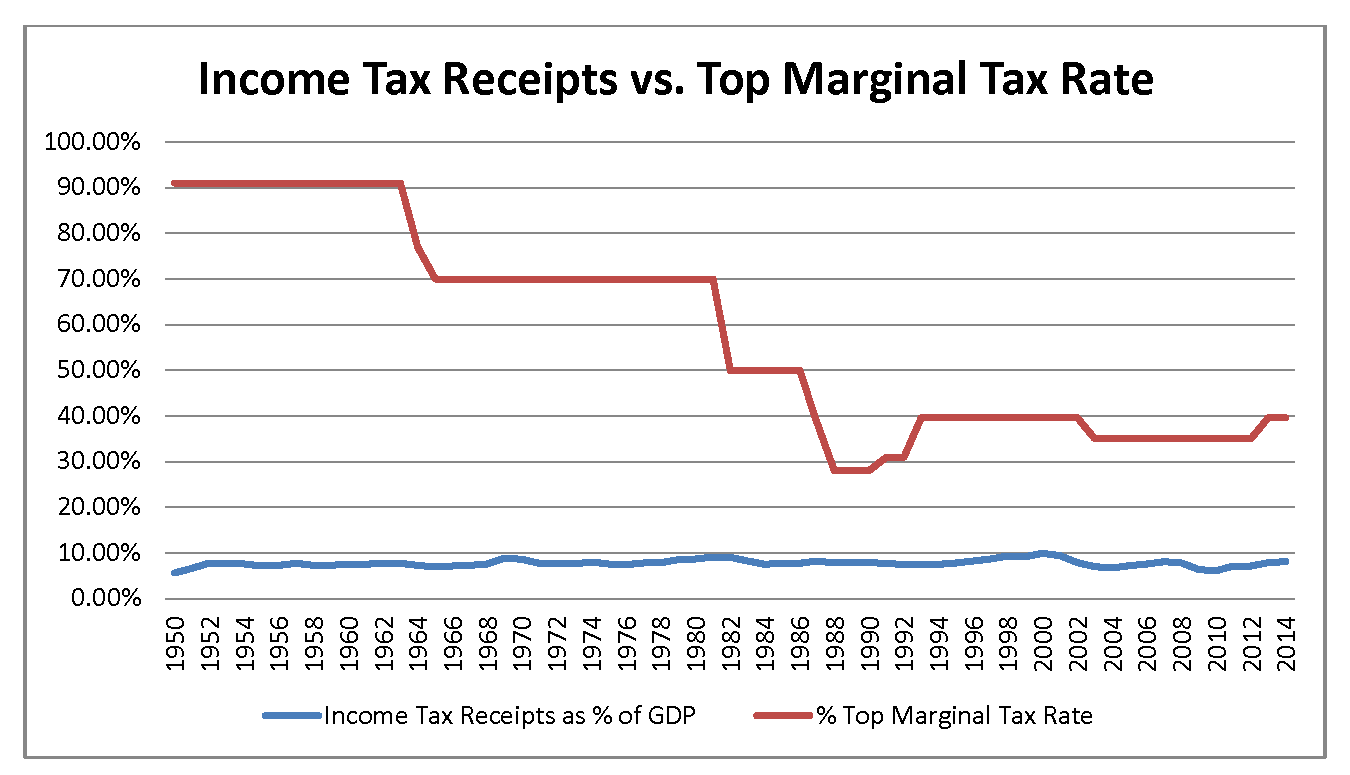 But who is paying these taxes a liberal might retort? Has the burden fallen more on the middle and lower classes? Well, no. In fact, the percentage of taxes paid by the highest quintile of income earners has steadily gone up since 1980. In 1980, the top 20 percent paid about 55 percent of all income taxes. Today, it’s just shy of 70 percent. The same goes for the top 1 percent, which went from about 15 percent in 1980 to just shy of 30 percent today.

A study from the Congressional Research Service concludes that the effective tax rate for the top 0.01 percent of income earners during the period of 91-percent income taxes was actually 45 percent. Given that the top bracket is so much lower today ($3,425,766 in 1955 vs. $413,200 in 2015), the 39.6 percent top marginal rate probably yields something pretty close.

Another major factor was the myriad of deductions and loop holes that used to be available. Many of these were eliminated by the Tax Reform Act of 1986, which by no coincidence coincided with the biggest rate deductions. For one, interest had previously been deductible on all loans. After the act, it has only been deductible on home mortgages.

But what was probably the biggest lost deduction for wealthy individuals was the elimination of deductions on passive investment losses on real estate. Before 1986, wealthy individuals would often buy real estate with no hopes at all of it cash flowing. That wasn’t the point. The point was that real estate is depreciated every year in the eyes of the IRS. Even though in the long run, properties usually go up in value, the IRS assumes that every twenty-seven-and-a-half years a property’s value will depreciate to zero.

This “loss” can be written off. So, for example, say a man earning $100,000 a year buys a property worth $275,000. He rents out the property and breaks even on it. The tax code allows that person to write off $10,000 as a loss which he can count against his income for that year. So now he only has to pay taxes on $90,000. If he owned ten such properties, his income would be zero, at least according to the IRS.

That deduction is now gone for everyone but “active” real estate investors, or those who invest in real estate as a career.

Indeed, one former tax accountant even made the case that there were so many deductions, loop holes and the like in the pre-1986 tax code that “… there was a massive amount of tax fraud at all income levels under the old code. It was so bad and so common that most people took pride in telling others how they cheated on their taxes.”

I’ll leave how true that statement is to the reader, but from what I’ve heard, it sounds about right.

Regardless, the simple fact is that the rich never paid 90 percent of their income in taxes or anything even remotely close to that. Unfortunately though, some memes die hard.