Last week was a tale of two cities.

In Washington President Trump followed through on his plans to escalate US military spending, proposing a budget that included $639 billion for the Pentagon — a $54 billion budget increase. Meanwhile, in Moscow, the Russian government has announced a 25% reduction in defense spending, the sharpest cut since the 1990s. This brings Russia’s total military budget for the year to around $50 billion dollars, less than Trump’s proposed increase.

Not only does this demonstrate the absurdity of the beltway’s desire to portray Vladimir Putin as the world’s most dangerous man, but it further highlights the irrationality of the Pentagon’s budget. 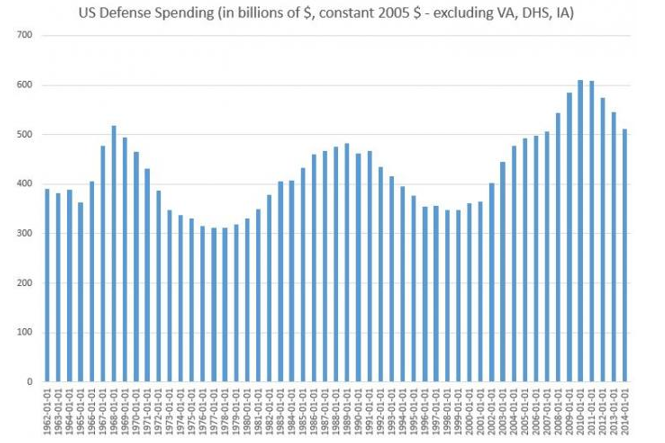 Trump has attempted to justify his spending binge by parroting the beltway-conservative line that the Pentagon was left to wither away under the Obama administration. Unfortunately the actual record shows this excuse holds up about as well as the former president’s peace prize, with the military budget being consistently higher under Obama than during the famed “military buildup” of the Reagan administration.

It is also worth noting that in spite of politicians’ tendency to describe the Pentagon’s budget as “defense spending,” it would be accurately described today as its war budget. After all these numbers don’t even include the money allocated to other government agencies such as Homeland Security.

Trump has long had a personal reputation for gaudy extravagance, but his military budget becomes all the more striking when compared to the rest of the world. Based on 2016 numbers, not factoring in Russia’s new cuts, the president’s proposal would have US military spending equal to that of the next nine largest defense budgets.

Now critics of Vladimir Putin will argue that Russia’s military cuts are not a product of an enlightened understanding of military spending as a drain on productive resources, but rather a consequence of Russia’s economic problems. This is probably true. If Putin had America’s economy rather than Russia's, it is quite possible that his military spending would be similarly obscene.

It is worth noting, however, that America is only able to sustain such profligate military spending due to its closing of the gold window after becoming the world’s reserve currency. If Nixon had not broken the dollar’s tie to gold, then it would be much harder for America to spend so lavishly on its military while also being one of the world’s most indebted nations in the world. Otherwise it is likely we would see countries such as China, which still holds over $1 trillion in US debt in spite of recent sell offs, exchanging their dollar holdings for gold. As other nations begin to reconsider their relationship with the US under Trump, it will be interesting to see if any country takes steps to undermine America’s unique status as analysts such as James Rickard’s have predicted.

Regardless of the reasoning for Putin’s cuts to Russia’s military budget, America would be better off if Trump followed his example. While Republicans usually prefer taking a blind eye to Pentagon spending, the same waste, fraud, and abuse haunt the Pentagon as any other government agency. Particularly, as we can clearly see, there is no other country that poses a serious threat to military capabilities.

Now that he is president, Trump likes to tout the fact he’s listening to America’s generals. Perhaps he needs to talk to General Mike Millen, the former Chairman of the Joint Chiefs of Staff. Perhaps then he would see that the greatest threat America faces isn’t from China, Russia, or North Korea — it is from the national debt. Until Trump reverses course on military spending, and gets tough on entitlements, his “America First” budget will only make the US worse off.