GET NEWS AND ARTICLES IN YOUR INBOXPrint
A
A
Home | Wire | Thanks to NATO, Americans Pay for Turkey's Wars

Thanks to NATO, Americans Pay for Turkey's Wars

Turkey has been increasingly courting a war with Russia, which is something it would not dare do if it didn't have the backing of NATO behind it.

Once driven by Cold War geopolitics, Turkey's continued membership in NATO means that American taxpayers subsidize the Turkish state in the form of guarantees of military defense in case of military conflict with non-NATO nations.

Turkey, which brutally represses ethnic minorities like the Kurds, and which is assisting radical Islamist "rebels" in Syria, has hinted at an invasion of Syria to assist enemies of the Assad regime in Syria. Turkey has also been working with Saudi Arabia to plan a possible wider war in the Middle East. Saudi Arabia, of course, is one of the most brutal and authoritarian countries on earth, characterized by a total absence of freedom of religion or freedom of speech, while beheadings are common for non-violent "crimes" such as adultery and "sorcery." In fact, beheadings are far more common in Saudi Arabia than in the so-called Islamic State, and the Saudi regime's ties to terrorist groups are extensive.

American taxpayers have long been subsidizing the Saudi and Turkish regimes through NATO in the case of Turkey, and through both of the US-Iraq wars, which conveniently eliminated Saddam Hussein's secular regime that had competed with Saudi Arabia's Islamist regime for dominance in the region.

Should Saudi and Turkish intervention in Syria provoke Russian reprisals against Turkey, and should the NATO alliance hold, Americans will find themselves paying for a war with Russia that will make the wars in Iraq and Afghanistan (which may cost up to $4 trillion) look cheap by comparison.

From the very beginning NATO has been a subsidy program for other NATO members, and has long allowed NATO member states to focus more of their budgets on domestic social spending while the American taxpayers foot the bill for Europe's welfare states and latter-day colonialism.

NATO — if it ever did serve a legitimate defense function — was always focused on Europe's defense, and not even in Cold War days did NATO do anything to protect North America from Soviet invasion. After all, Soviet invasion of the North American mainland was never anything more than a fantasy played out in Hollywood movies like Red Dawn. The US Navy and the US's immense nuclear arsenal was the key factor in this. NATO had little to do with it.

On the other hand, NATO members during the Cold War saw NATO as a bulwark against invasion by the Red Army, which was indeed larger than any army possessed by any NATO member, including the US. Whether or not the Soviets could ever actually afford to invade and occupy Western Europe is certainly debatable, but any honest view of NATO would lead us to the conclusion that, from a military perspective, NATO existed for the benefit of the Europeans. (France even attempted to use NATO to fight France's colonial wars.)

From a political perspective, of course, NATO helped the United States extend its global influence into Europe, the Middle East, and beyond. From the American government's point of view, there were numerous advantages to NATO. The American taxpayers, however, fared less well.

Today, with the Soviet Union gone, NATO has become simply an instrument of encouraging political unification in Europe while acting as an international body that's convenient for fighting wars such as NATO's 1999 war on Serbia, and NATO's bombing of Libya in 2011.

Turkey likes to talk tough with Russia, but in any one-on-one contest between the two countries, Turkey would be obliterated and Turkey knows it.

Russia spends a lot more on defense, both in terms of total numbers and in terms of percentage of GDP. Russia spends more than three times as much as Turkey in total dollars — $85 billion compared to $22 billion — but that doesn't actually tell us much about long-term military capability in a crisis situation.

Real military capability is a function of total GDP, and in terms of total GDP, Russia is twice as large as Turkey. This means that the Russian state can likely access more than twice as much wealth within its its own borders, compared to Turkey.

So, in a Turkey-Russia war, Turkey would be easily destroyed.

But, it's not really about just Turkey and Russia. Turkey knows it has a pretty good chance of convincing the US government to force Joe Sixpack to pay for Turkey's tough talk with Russia. All the while, Turkey will be paying next to nothing.

This graph shows how much Turkey contributes to NATO's overall budget: 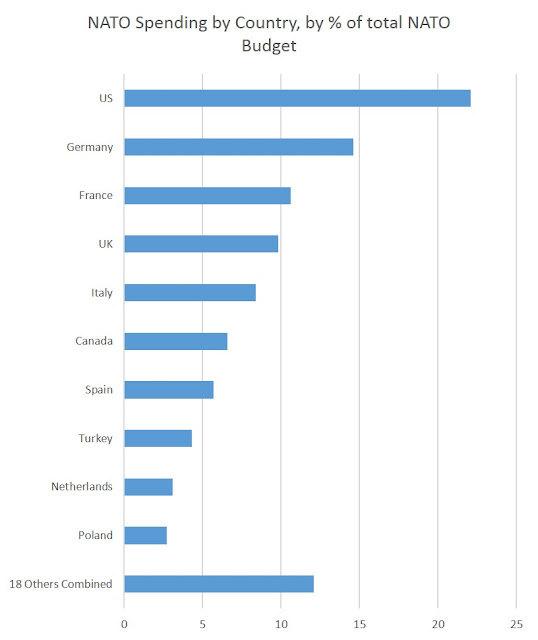 The US pays 22 percent, while Turkey pays 4 percent. It's all based on a formula of Gross National Income, which is clearly a formula that doesn't reflect the lopsided benefits that some governments receive without paying much of anything. For instance, the Polish government views membership in NATO as an indispensable diplomatic tool in dealing with Russia. Yet, the Poles pay next to nothing. The Turkish state, as well, contributes little, while simultaneously trying to expand its influence in the region and attempting to provoke non-NATO governments into war.

In many ways, Turkey is somewhat like your cheapskate friend who goes out to dinner with a group of friends, orders five cocktails and and a dessert in addition to the entree, and then insists the bill be divided up evenly with everyone who just had an entree. But it's even worse than that. Turkey wants the more productive, more hard-working friends (i.e., the American taxpayers) to pay more, regardless of how much they ate.

The American taxpayers should be saying "no, thanks" to this arrangement.

Overall, though, the NATO budget is really small potatoes. It's just $2 billion dollars used for coordination and funding the NATO bureaucracy. Most of the military spending of NATO members is not technically NATO spending.

But even in this respect, Turkey is expecting a free ride. This graph, from The Council of Foreign Relations shows Turkey military spending in 2013 compared to other NATO countries taken together: 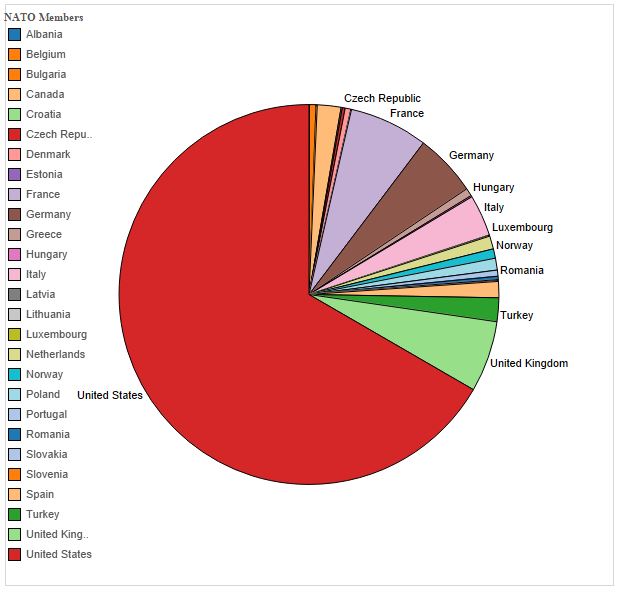 Turkey, spends about the same amount as Canada, which is to to say it spends very little.

Now, before we go any further, let me say that it's important to not fall into the trap of equating military spending with good defense or with superior defense capability. After all, the trillions spent by the US government on wars in Iraq and Afghanistan has only worked to destabilize the region, and has made the world more dangerous, while creating a power vacuum that benefits Al Qaeda and ISIS. Moreover, military equipment and troop readiness has only been diminished by endless war-making. The US spends more, and gets weaker.

However, if Turkey is going to be whooping it up for war with the Russians, the Turkish taxpayer should pay for it. The American taxpayer has plenty to pay for already.

But don't expect that to happen any time soon. since the American state doesn't care about the American taxpayer, it doesn't have a problem with being on the hook in case Turkey, Saudi Arabia, Iran, and Russia start World War III. The NATO alliance provides an excellent excuse for the American government to get involved in the conflict, all the while claiming "we have a commitment to our NATO partners."

On the other hand, if our "representatives" in Washington cared anything for fiscal responsibility or keeping costs under control, the US would leave NATO immediately, or at least take a small step in the right direction by expelling Turkey from NATO, ASAP.