GET NEWS AND ARTICLES IN YOUR INBOXPrint
A
A
Home | Wire | Thanks, Bush and Obama: 1 in 7 Americans Were on Food Stamps in 2015

Forty-five million Americans were on food stamps — also known as the Supplemental Nutrition Assistance Program (SNAP) — at some point in 2015. That's equal to one in seven Americans. It's a big number, although not an all-time high. The all-time high was reached back in 2013 when more than 47 million Americans enrolled in the program. The total budget in 2015 was $73.9 billion, or approximately 12 percent the size of all defense and veterans programs.

In spite of falling unemployment rates — which are really driven by declining work force participation — food stamp use remains near record highs and is up by 78 percent over the past ten years: 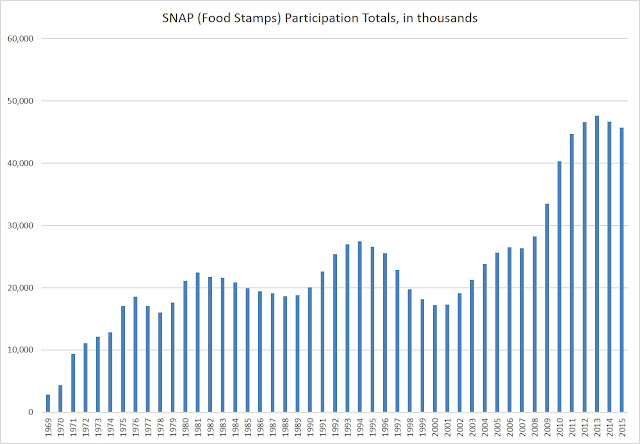 And, the picture doesn't improve if we adjust for population growth. (Obviously, the US population has not increased 78 percent over the last ten years.) If we take the numbers on a per capita basis over time, the curve looks essentially the same: 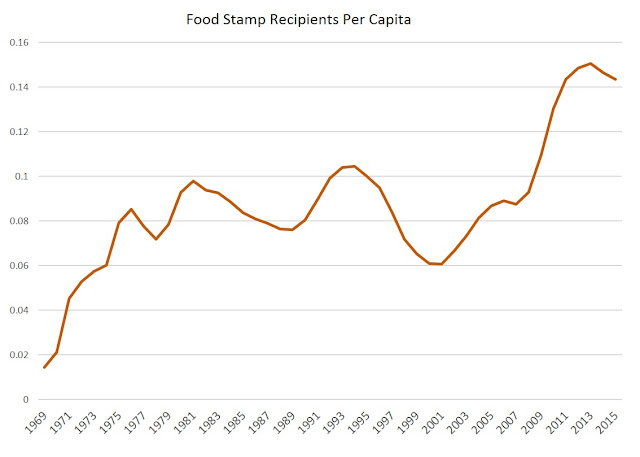 Normally, though, during economic expansions, food stamp participation should decrease, as it did by 36 percent from 1993 to 2000. This would make sense since, all things being equal, a strong economy will translate into fewer people qualifying for food stamps.

We can see the growth rates here: 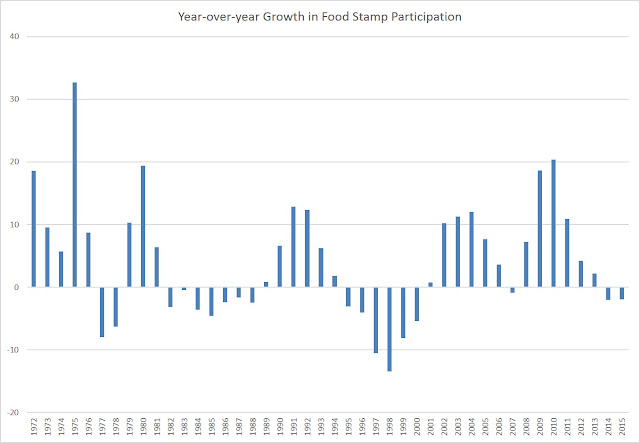 Food stamp participation increased almost non-stop between 2001 and 2013. Only 2007, which was the height of the last boom, showed a decline.

So, is this all the fault of a bad economy?

Breitbart attempts to say so in a recent article in which it pours cold water on Gallup's attempt to sing the praises of "the economic recovery." Breitbart is correct that the economy is hardly robust, but one of the biggest factors in the sky-high levels of food stamp participation is not the anemic economy, but the fact that the Bush administration and the Obama administration expanded the food stamp rolls via public policy.

As this article from The Washington Examiner explains, the food stamp program was heartily expanded under Bush in the 2002 Farm Bill, the 2008 Farm Bill, and in 2009 "stimulus" packages. Obama naturally did nothing to reverse these expansions:

The 2002 Farm Bill expanded eligibility to noncitizens, increased benefits for families with more children, adjusted benefits for inflation and made it easier to enroll. Further easing of eligibility requirements followed in the 2008 Farm Bill, which contained more than 30 provisions relating to food stamps, including higher minimum benefits. As the data show, spending after changes in eligibility grew by $185 billion between 2002 and 2008.

So, if you're wondering why food stamp participation increased during the Bush administration's boom period, the answer is: Bush signed those expansions into law.

It's just the latest reminder that when republicans control the White House, Senate, and House, they manage to massively increase the size of government.

Nevertheless, the current media narrative on this is that governments are callously cutting food stamp benefits as people starve. "More Than 500,000 Adults Will Lose SNAP Benefits in 2016 as Waivers Expire" claims a recent headline from "The Center on Budget and Policy Priorities." "12000 Arkansas residents to lose food-stamp benefits," says another headline.

Once we take historical context into account, though, we realize that recent "cuts" are really just an attempt to get the food stamp budget under control after the expansions of the Bush and Obama years.

Had the Bush administration not expanded benefits to non-citizens (who are citizens of other countries and can thus access social benefits elsewhere) the cuts today may have seemed less urgent.

Last week, we looked at which states receive the largest amounts of federal spending, and it's not surprising that the states with the most food stamp spending somewhat mirror overall federal spending: 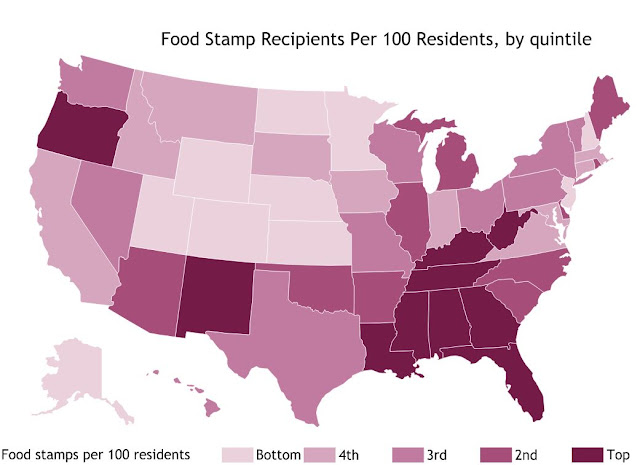 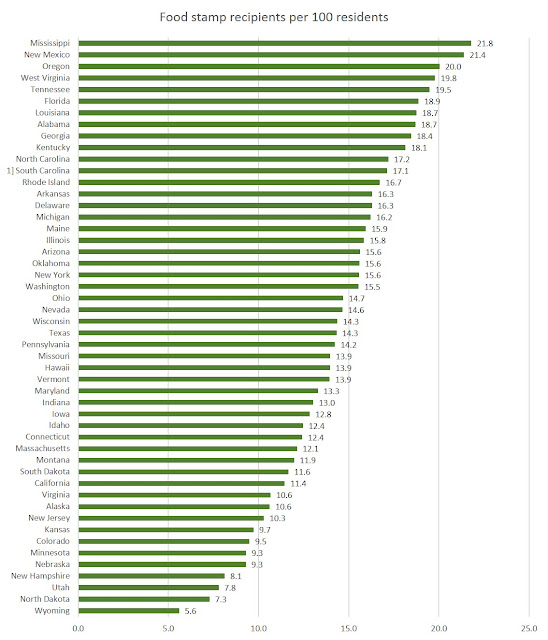 Historical annual food stamp participation data comes from the USDA. Population data for per capita calculations is provided by the Census Bureau. State-by-state data is found via the Food Research and Action Center. The state-by-state comparisons are based on October 2015 food stamp data.