Socialism Is on the March | Mises Wire
Skip to main content

Socialism Is on the March

When I met Ludwig von Mises, he was exactly as I had imagined him: kind, brilliant, dignified, beautifully mannered and dressed, a gentleman from what Murray Rothbard called “an older and better world.” His wife, Margit, had been an actress, and she had great beauty, intelligence, and presence as well.

A genius, Mises was the greatest economist of the 20th century, and a hero in his courageous battles with Marxists, National Socialists, and Keynesians. Never did he put his own career ahead of teaching the truth, which he did in brilliant book after brilliant book. As a result, he never had the professorships and honors that were his due. Forced to flee the Nazi occupiers, he found American Keynesians a hostile bunch as well. So his career was stunted, but not his spirit, and not the legacy and example he left to all who cherish freedom.

Murray Rothbard I had the privilege of knowing well. He was funny, charming, and a genius, too. Like his mentor Mises, Murray suffered in his career for his integrity and truth-telling, which he also displayed in brilliant book after brilliant book. Even billionaire oligarchs couldn’t stop him. A model scholar, teacher, and polymath, he seemed, like Mises, to know everything.

Murray once told me he never heard Mises express any self-pity for his treatment, but only good will and determination. I never heard Murray express such feelings either. He was the happy warrior of Austrian economics and liberty.

Maybe it is no surprise that Murray, even as a very young man, was targeted for marginalization. Like Mises, he had been a straight-A student all his life, but had his PhD blocked for years at Columbia University. His doctoral committee had enthusiastically approved his dissertation, but GOP Keynesian Arthur Burns, the Big Man in the department, intervened to veto their decision. Note: Murray’s The Panic of 1819 — his dissertation — is still the standard work on that episode, for the mainstream as well as Austrians. 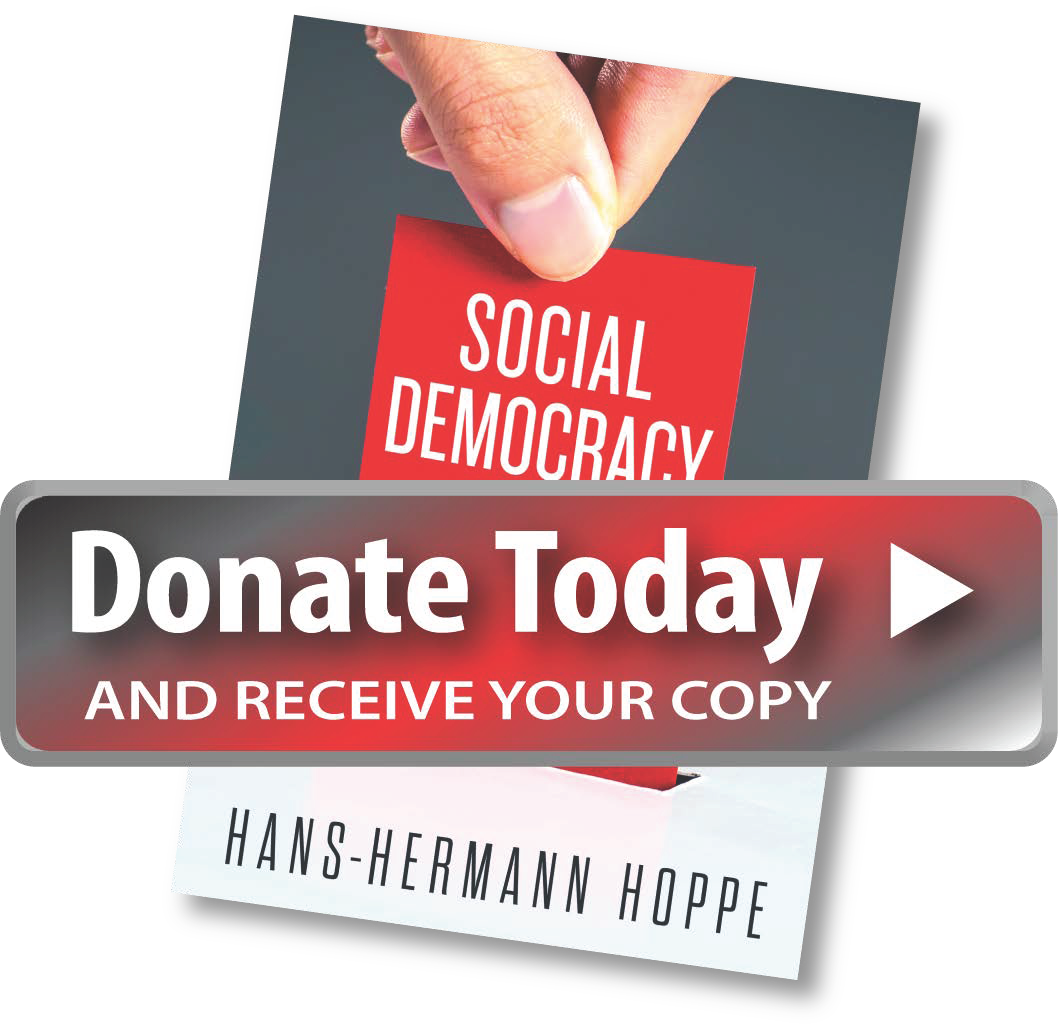 The humorless Keynesian Burns had known Murray from childhood, and opposed him for his spirit and his ideas. Not until Burns was wafted up to Washington, to be chairman of Eisenhower’s Council of Economic Advisers, was Murray’s degree immediately granted. Later, Burns went on to infamy as Nixon’s Fed chairman, where he engineered the horrific inflation of the 1970s.

When Murray was blocked, his future seemingly wrecked, he might have given up. But not Murray. He just worked harder, and gained a job with the libertarian Volker Fund, analyzing all the most significant new books in economics, history, and philosophy being published. He was entirely familiar with all three areas, and his papers are still important.

Not only was Murray a hardworking, optimistic genius like Mises, he also never gave up. He knew he had chosen a difficult path: telling the truth in a Keynesian profession and a Keynesian world. Like Mises, he could easily have had a high-paying job at a top university. All he had to do was conform, flatter, and advocate State control of the economy.

When Mises asked Margit to marry him, he warned her that while he would write much about money, he would never have much of it. Murray could have said the same thing to his love, Joey.

As a result, it took Murray a long time to get even an ill-paid teaching job, at a minor college in Brooklyn. Nevertheless, this happy and inspiring man went ahead to help create Austrian economics as we know it today, modern libertarianism, and honest American history.

Most academic journals were barred to him, so he published wherever he could, even in tiny-circulation periodicals. He seized any chance he got to teach. He had to, for establishment publishers were not interested in the compelling words of an economist who advocated laissez-faire capitalism, private property, and human liberty, who refuted the Fed’s inflationism and all other funny-money schemes, and demonstrated what fractional-reserve banks helped bring on: recessions and depressions.

You can imagine how thrilled Murray was, at age 23, to be commissioned to turn Human Action into a textbook. But he soon realized that what Austrian economics needed was a treatise that built all of economics, logically, step by step, from the fact that we all have goals and seek to achieve them. The result was the famous Man, Economy, and State.

Mises heralded this work. But even having written a masterpiece, Murray faced establishment opposition. An ex-communist associated with Bill Buckley convinced the publisher to suppress the last part of the book as too extreme. Why? Murray had shown that any violent intervention in the market, such as taxation, was destructive. Indeed, he showed that the State itself was only a “gang of thieves writ large.”

Like Mises, Murray was undaunted, and he beat the establishment to do his work. Even its power and pelf couldn’t stop him.

When I determined to start the Mises Institute, the first person I talked to was Margit von Mises. She gave her enthusiastic blessing and agreed to be our chairman, provided that I would spend the rest of my life at this work. I promised her that I would. Next I asked Murray to be our academic head. He literally clapped his hands in joy.

Murray loved the Institute, and devoted himself to it as the fulfillment of his strategic vision. Like Mises, his example still helps chart our future. We have his immense personal library and vast papers. All his books are in print, and with the Internet, he is far better known, and far more influential today, than in his lifetime. We also have copies of all Mises’s papers, and all his books are in print. He too is better known worldwide than in his lifetime.

Murray didn’t live to see the Internet, but he would have loved it, and especially our spectacular website. Mises.org is the best-read economics site in the world, approaching 5 million readers this year alone.

Not only are the great Austrian and libertarian classics now available to the world for free, but we also have hundreds of other important books, the entire print runs of key scholarly journals, many thousands of articles applying Austrian theory to a great many important issues, and thousands of hours of audio and video of all the seminars and conferences we conduct.

Not to speak of our magazine The Austrian, the Quarterly Journal of Austrian Economics, and the Mises Weekends podcast.

Mises and Murray’s example and work inspires us all every day. They taught us to never lose heart, to stick to our guns, and never to be pessimistic about the future of freedom.

Murray especially loved our signature program, the Mises University, and the thousands of smart and dedicated students who have thronged to it from all over America and many foreign countries, too, over the years. He thought it essential that we keep the libertarian and Austrian classics in print, publish our academic journal, and host a professional program for professors and graduate students, the Austrian Economics Research Conference.

He wanted smart Fellows in residence — our Rothbard graduate program — a generous, brilliant and productive faculty, and courage by all in carrying the fight to the enemy. He would have loved our immense social media presence, our timely YouTubes, our many daily articles on the Mises Wire, and our seminars and conferences — we  had nine this year. And we brought back the Libertarian Scholars Conference in New York.

From the very beginning, we’ve also had the constant help of the great libertarian and Austrian, Ron Paul. Indeed, his early fundraising helped put the Institute on the right track, and we benefit from his wise counsel on our board.

As regular higher education circles around the PC drain, we want to offer a free-market alternative, starting with an MA in Austrian economics. Mises dreamed of an Austrian graduate school. This is a big step toward that goal.

But we need your help to keep going.

We live at a historic moment. The Left is on the march as it has not been since the 1930s. How needed we are!

Now is when the work of Mises and Rothbard, and other greats associated with the Institute such as F.A. Hayek and Henry Hazlitt, is needed. Now is the time when the intellectual cadre built up over 36 years is needed the most, to battle the socialists, the Marxists, and every enemy of freedom.

The Mises Institute, with our technological know-how, an unbeatable network of scholars, and the great body of work that constitutes our heritage, is uniquely poised to take advantage of this crucial opportunity.

Wrote Murray of Mises and the Institute:

A man of high courage, a scholar with unusual integrity, Ludwig von Mises never knew any other way than pursuing truth to its ultimate conclusions, however unpopular or unpalatable. And, as a result, Ludwig von Mises was the greatest and most uncompromising champion of human freedom in the 20th century.

It is no wonder, then, that the timorous and the venal habitually shy away from the very name of Ludwig von Mises. For Mises scorned all obstacles and temptations in the pursuit of truth and freedom. In raising the proud banner of Ludwig von Mises, the Mises Institute has indeed set up a standard to which the wise and honest can repair.

On that banner is also Murray Rothbard, who might have been writing about himself. Help us hold that banner high. Join us in the battle for freedom, truth, and the future.

I hope you will commit to helping us spread the message of Mises and Rothbard, in time-tested and new ways, and train future generations to carry forth Austrian economics and libertarianism. Never has this been more needed.

Why "Stakeholder Capitalism" Is a Disaster for Entrepreneurs

The driving force behind the stakeholder capitalism philosophy is precisely that it creates opportunities for political actors to assert disproportionate control over the economy’s resources.