GET NEWS AND ARTICLES IN YOUR INBOXPrint
A
A
Home | Wire | Shootings: Why Don't Schools Have Better Security?

Whenever there is a mass shooting in the media, commentators rush to figure out on what to blame the latest violence. Predictably, those who want gun control blame gun control. Others blame mental illness — and perhaps a lack of government programs related to it. Some others blame racism or ideology, as was the case with the Aurora theater shooting when one ABC talking head concluded the shooter must a "Tea Party" member within hours of the shooting. And then there's the Republican politician who blamed the same shooting on “the ongoing attacks on Judeo-Christian beliefs.”

RELATED: "There Are Fewer School Shootings Now Than During the 1990s"

Nevertheless, the need to create a theory showing exactly what causes these shootings remains strong in many observers. Often, these theories are followed up with some demand for a change in public policy, whether it be gun control, more health care spending, or changes in education and social policy.

What all of the strategies have in common, however, is that they depend on very indirect solutions related to social engineering while ignoring the most proximate cause of the tragedies in question.

Those who think they can abolish school shootings with gun control, for example, must also then ensure that weapons cannot be attained by illegal means, and that potential murderers will not accomplish the same ends by using other improvised weapons.

RELATED: "Security Works at Disney — But Can't Work at a Public School?"

Similarly, those who think that addressing mental illness must also assume that all potential perpetrators will receive treatment.

Even more fanciful is the idea that the FBI and other police agencies can be counted on to competently profile, and observe every potential shooter. The FBI's record in this regard is rather sub-par, to say the least.

Moreover, these policies can take years to be implemented, and also require extremely broad, hard-to-enforce changes in policy. These policies also bring with them considerable downsides to the public at large in terms of financial costs and in civil liberties. Expanding FBI power to impose surveillance on every weirdo in America comes at a cost. Banning weapons — and then enforcing that ban — comes at immense cost as well.

In practice, the most practical strategy is preventing homicidal people from entering schools with weapons is to take a direct approach to preventing this sort of activity. 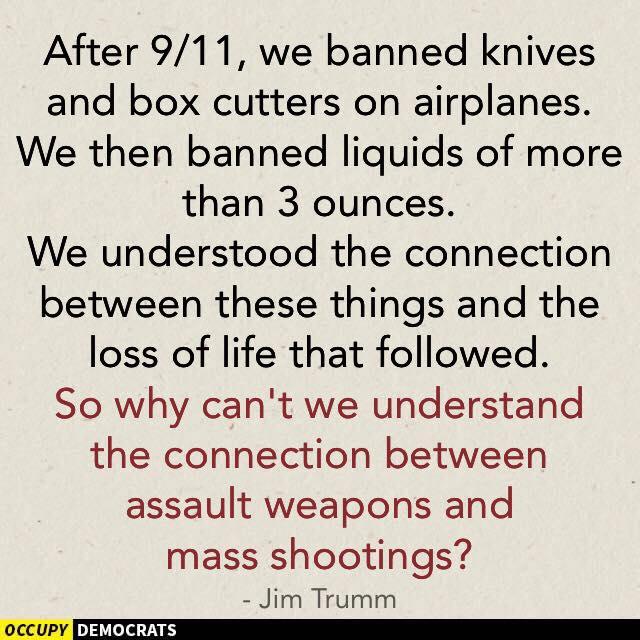 We already see this logic at work in airline safety, for example.

Yes, the logic is lost on some people, as in the people who spread around this meme:

The implication is that a nationwide gun ban works like a box-cutter ban. But the error here should be obvious. Box cutters and liquids were banned from commercial airplanes. Nearly 100% of adult Americans still own bottles of liquids and knife-like objects such as box cutters. And, virtually no one calls for a nationwide ban on box cutters or even on all substances that might be used to make bombs.

This is because many people recognize such broad solutions place significant burdens on society overall.

For some odd reason, however, there continues to be resistance to the idea of developing serious, meaningful security strategies that directly address the situations that lead to deaths in areas such as schools, nightclubs, and hotels.

Mostly, this is due to nostalgia and fears of hurt feelings.

We've heard it all many times, of course. We can't have greater security in schools, hotels, and shopping centers because "they will feel like prisons" or "kids will be hurt psychologically" or "it's too expensive."

When the rare tragedy of this nature does occur, though, these lines of thinking all lead to the same scenario: explaining to a child with a gunshot wound: "sorry kid, we could have had armed security personnel at your school, but we didn't want you to feel bad."

The "too expensive" excuse is especially galling since public schools are absolutely laden with non-teaching, administrative personnel unrelated to classroom instruction. As this study shows, since 1970, the student population has increased 8 percent while the non-teacher staff population has increased 130 percent. Gee, where could we ever find the resources for more security personnel?

Leave it up the people at The Nation, however, to call for less security at schools, because that money is being "diverted" from education.

To be fair to the authors, they do make two good points. The first is that the number of people who are murdered at schools nationwide is extremely low. Secondly, the article correctly notes that a lot of the money being spent on security is really just for show.

For example, while spending on "security" at schools has increased considerably in recent years, most of that money is spend on cheap quick-fixes like security cameras. Some spending is done on controlling access, but little is spent on competent on-site personnel and other strategies. The conclusion to draw from these fact, though, is not that money spent on security is necessarily wasted. It's just being spent badly.

Even worse is the dismissal of security measures because they conflict with someone's (usually incorrect) notions of what things were like in the good old days. "My grandpa never had security at his school" is a common thought. Well, maybe grandpa should have had some security, since data suggests homicide rates in the 1920s and early 30s were considerably higher than they are today.1 Among those murders, for example, was the Bath School Disaster of 1927 in which Andrew Kehoe murdered 38 elementary schoolchildren. Those children never had grandchildren who would one day pine for "simpler times."

One's feelings about the days of yore and how the world ought to be are not a great basis for taking practical steps toward increasing security.

In the real world, if school shootings really are a concern, then entrepreneurs and consumers need to work together to find practical, affordable strategies that can be implemented.

Real experience suggests, however, that consumers don't really care that much about it. Oh sure, people say they're very concerned about it, but their demonstrated preference is usually toward cheaper tuition or keeping their kids in public schools where the administration is more concerned with hiring another guidance counselor than with investigating practical security options. If people were really concerned about it, we'd see a mass exodus of students from public schools with lackluster security measures. We don't see that — and maybe people really do recognize how low the odds really are.

This lack of concern is also why many hotels — like the Mandalay Bay in Las Vegas — can't be bothered with implementing meaningful security. Customers are more concerned with keeping their weekend getaways cheap, and just trusting to luck that nothing bad will happen. Steve Wynn has noted that his hotels do in fact impose surveillance on customers in the name of security — something that has been unnoticed by consumers.

But, until enhanced security becomes something that is truly demanded by both voters and consumers, we won't see much of it. People, apparently prefer what security experts call the "security roller coaster": panic, forget, repeat.