GET NEWS AND ARTICLES IN YOUR INBOXPrint
A
A
Home | Wire | Recession Predictor: Conceptions

I’ve written recently about the Fed tightening the True Money Supply and that a cleansing may be approaching. However, Kasey Buckles, Daniel Hungerman, and Steven Lugauer tell us in their National Bureau of Economic Research working paper that we shouldn’t be just focusing on monetary aggregates but conceptions.

According to Buckles, et al, exuberance in the bedroom, irrational or otherwise, begins to wane prior to a recession. By the way, Gary Becker is cited in a footnote explaining, “It takes about 10 months on the average to produce a pregnancy and this period combined with a nine month pregnancy period gives a total average construction period of nineteen months. This period is sufficiently long to reduce the impact on the demand for children of temporary movements in income.”

To put an Austrian spin on this, conception is essentially the creation of a higher order good. Savings and investment are required for this undertaking just as any other long-term investment.

“We certainly don’t think it’s magic, we don’t think there’s people out there with crystal balls,” Mr. Hungerman told the WSJ’s Ben Leubsdorf. “But when ‘people sit down at home and have a conversation about having another kid, part of that’s going to involve their thinking about the future.’

“Looking across millions of such conversations around the nation, he said, ‘It appears people are pretty good at anticipating recessions.’”

The authors first study the Great Recession and determine that a fall in conceptions preceded the crash.

While GDP displays a decline in growth in the last quarter of 2007, and negative growth in mid-2008, conception growth turns negative in mid 2007 and breaks from trend over a year before. The fall in the growth rate of conceptions occurs before the recession began, and several quarters before the collapse of Bear Stearns (and even further before the collapse of Lehman Brothers). The magnitude of the decline is also notable—in proportionate terms, fertility- and economic growth contracted by roughly equal amounts, although fertility growth rates reach a nadir five quarters—more than a full year—before GDP. Note again that even after GDP growth rates turn positive in late 2009, fertility rates continue to decline relative to the prior year. In this sense, the recession has been followed by a “baby-less recovery.”

“In both [recessions], we again see conception growth falling below prior-year levels before the recessions begin,” the authors wrote and point out that “the 1990 recession was also followed by a ‘baby-less’ recovery.”

The authors graphed conceptions with GDP, unemployment rates, consumer confidence, purchases of durables, home prices and, of course, recessions. They write, “Understanding how an economic shock impacts fertility many years later is of course worthwhile, but does not gainsay the point that fertility can be — and indeed is —anticipatory of economic conditions. Researchers should consider carefully the importance of near-future conditions when modeling fertility.” 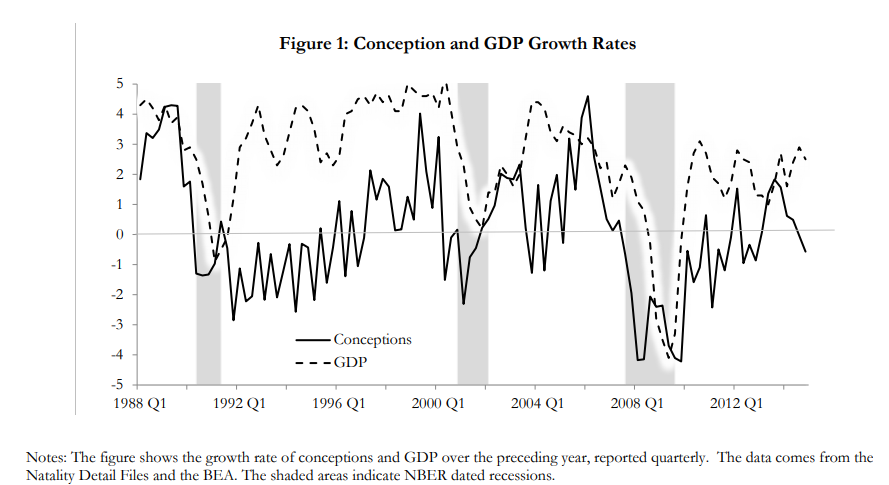 In their conclusion the authors claim,

In this paper, we use high-frequency data from birth certificates in the U.S. to document a new business cycle fact: the growth rate of conceptions declines prior to economic downturns and the decline occurs several quarters before recessions begin. Our measure of conceptions is constructed using live births; we present evidence suggesting that our results are indeed driven by changes in conceptions and not by changes in abortion or miscarriage. Conceptions compare well with other economic indicators in anticipating recessions. Overall, the relationship between fertility and the economy appears to differ before the start of a recession and at (or after) the end of a recession. In the large literature on fertility, we know of no prior work that reaches these conclusions.

So where are we now? What’s the current conception count? What is the collective women's intuition telling them? Who Knows? As Mr. Hungerman says, “Tracking conceptions in real time is pretty tough.”

What Happens When Central Banks Attempt to Tighten? Even More Resource Misallocation

Popular economic wisdom says central banks can counter harmful effects of inflation by raising interest rates. Unfortunately, such moves carry their own forms of misallocation of resources and capital.