GET NEWS AND ARTICLES IN YOUR INBOXPrint
A
A
Home | Wire | Private-Sector Murder vs. State-Sanctioned Murder

Violence, whether private sector (i.e., "crime" and non-state "terrorism") or government sector (war and police actions) are at the center of the debate about the state and its uses. Those who want stronger more centralized states will often argue that one of the main benefits of a stronger, more centralized state is its ability to punish or prevent acts of violence against those who are forced to pay for said state. "Yes, you're taxed," they'll say "but without us you'd be at the mercy of murderers and foreign despots."

And, as we're reminded every time there's a media-induced moral panic over gun-related crime, a vast coercive state will be held up by its supporters as the thin line between safety and chaos.

Their position is that unless the state monopoly on coercion is further strengthened and centralized by law (by legally placing more coercive power in the hands of the police, and less in the hands of private citizens) then murder rates will soar.

No Lack of Crime in Countries with Restrictive Gun Laws

The problem for these advocates, however, is that there's little evidence that government efforts at controlling guns is the crucial factor in bringing down murder rates. Advocates of gun control often point to western Europe as evidence of their position, but they selectively ignore regimes that heavily regulate gun ownership, and yet endure high murder rates anyway. Gun control advocates attempt to cover up their cherry picking by claiming that only "developed countries" should be considered, but no reason is given why countries that score "High" on the UN's Human Development index, but which have relatively high murder rates, should be ignored. (This would include Mexico, Argentina, the Baltic States, Russia, and others.)

Not surprisingly, were we to include these other countries, we would quickly find that there are, in fact, many examples of states with restrictive gun laws and high crime rates.

On the other hand, it remains impossible to point to any one factor that trumps all others in lowering murder rates. Indeed, if one wanted to show an actual correlation between murder rates and something else, one could point to any number of variables.

One long-accepted factor that has been linked to violent crime is the median age of a population.  If critics of (somewhat) laissez-faire gun controls in the US are going to demand an explanation for why the murder rate here is higher than it is in Europe, one could easily point to the fact that the US has a younger population than most of Europe. Indeed, old populations can be shown to have low crime rates while young populations have high ones: 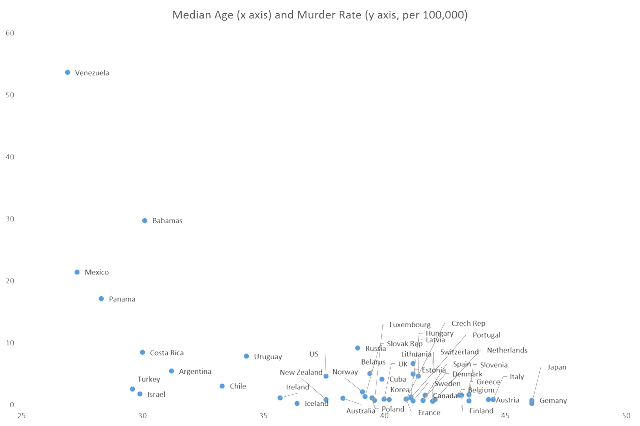 Different scholars who have studied the data have different opinions what causes murder rates to go down, though.

One of the most notable and interesting is Eric H. Monkkonen who conducted some of the most extensive studies on murder ever done. Monkkonen was known for casting doubt on a variety of assumed causes of crime. He showed in his work, for example, that murder rates were not necessarily likely to rise in the aftermath of wars, as was often assumed, given the number of trained killers that re-entered the population. He also famously debunked the idea that urbanization is a leading cause of increases in the murder rate. (A claim that is convincing in light of Russian data showing worse murder rates in the rural east.)

Monkkonen, with other scholars, has also also showed that increases in gun ownership were not a driving factor. As The New York Times has reported:

Recent research indicates that he was right. In Philadelphia, for example, the annual average rate of indictments for homicide fell from 4 per 100,000 in the 1850's to 2.2 in the early 1890's, according to research by Roger Lane, a history professor at Haverford College. The drop occurred as the city became industrialized and despite the greater availability of firearms during the period.

Monkkonen's position was that the key factor in reducing murder rates was the  "civilizing process," a concept invented by sociologist Norbert Elias that suggests that societal pressures on behavior are the key factor in lessening violence.

According to this theory, murder rates were very high in medieval Europe (an assertion that is supported by the data) and came down to today's very low murder rates in response to the rise of new social rules of behavior and new institutions. In Europe, as social norms turned away from "honor" killings and blood feuds, and toward what we would consider to be more "rational" means of settling disputes, the murder rate plummeted in Europe.

In many areas, this clearly had nothing to do with the availability of guns, since the high murder rates preceded that widespread availability of firearms. Moreover, the later declines in murder rates continued well into the period when Europeans had increasingly easy access to unregulated revolvers and similar weapons.In Britain, for example, "By the mid-nineteenth century armed crime was almost non- existent." according to historian Joyce Lee Malcolm. Gun controls were virtually non-existent in Britain until 1920, when fears about Bolsheviks and other threats to the state were used to justify new prohibitions. Violent crime is higher now in Britain than before 1920.

The "civilizing process," according to Monkkonen, resulted from the rise of more reliable and predictable urban police forces, and criminal prosecutions, and institutions such as schools. The state was involved in this process, although needn't have been. And what we call "the state" in these cases was often highly localized police forces and school boards and nothing resembling today's Homeland Security-type governance. The growth and quality of these services, made possible by wealth that came with industrialization, raised the cost of murder (for the murderers) while lowering the attractiveness of murder to settle conflicts, compared to alternatives (such as lawsuits).

The Apparent Limits of the Civilizing Process

Europe in recent decades has cultivated a reputation as a continent of peace-lovers, but those familiar with European history could not be blamed for hesitation in declaring Europe a peace-loving place. Even if Monkkonen is right in terms of interpersonal crime, the history of 20th-Century Europe suggests that the "civilizing process," at least in the presence of a strong centralized state, has its limits.

Europeans may have a relatively good record on private-sector killing over the past 200 years , but when it comes to state-sanctioned killing, Europeans certainly did not refrain from courting conflict. Europe's attempt to destroy itself in two world wars in the 20th century came after centuries of dynastic wars and civil wars, not to mention colonial wars and countless brutal repressions of native populations in occupied territories and colonies. If we were to factor in all 20-century "violent death" statistics (including intra-state wars, civil wars, massacres in the colonies, torture centers, and more), the Europeans hardly have established themselves as perpetual lovers of non-violence. [1] The fact that it has been 70 years since the last major European conflict proves nothing given that the First World War erupted after nearly 100 years with no major European wars.

It is entirely possible, however, that in the absence of the "civilizing process," Europeans would have an even worse record in these matters, and this is plausible given there is no paucity of violent conflict in Africa and Asia that is at least as destructive in terms of human lives destroyed per capita.

In fact, as horrible as the World Wars were, one could argue that, on a percentage basis, they weren't unprecedented in their bloodshed, proportionally speaking.  While the raw numbers of dead in the World Wars were far above and beyond anything seen before or since, as a percentage of the European population, the Second World Wars' death toll was comparable to that of the 17th century, which included the Thirty Years' War, among many other conflicts. (Proportionally, the death toll of the Thirty Years War,including civilians, was double that of WWI, and about equal to WWII. Steven Pinker emphasizes this point in The Better Angels of Our Nature.)

Max Boot, in his book on guerrilla warfare, Invisible Armies, expands on this point. In some ways, the World Wars were throwbacks with their attempts at extermination. Ancient and early medieval warfare in Europe, Boot contends, were also often based on extermination, and it was not uncommon for siege warfare and tribal warfare to lead to the decimation and near extermination of entire ethnic groups, city states, and other populations. The destruction of Jerusalem in 70 AD is just one example.

Pinker has also noted that the rise of industrialization, capitalism, and sophisticated economies has also motivated people to turn to violent death as a solution less often. That is, with the rise of modern economies, basic necessities were less scarce, and people became more valuable alive than dead — as potential trading partners or workers. According to Pinker: "...when it's cheaper to buy things than to steal them, people don't steal them. Also, if other people are more valuable to you alive than dead, you're less likely to kill them." Pinker terms this the "capitalist peace."

So while the violent death totals in the 20th century did not exactly constitute progress, given the weaponry available to Europeans in the 20th century, it seems that things could have been far worse. Nevertheless, to exclude these deaths from the European picture (or any evaluation of the violence level in a society) would leave us with only part of the story.

[1] One could conceivably claim that in the case of WWII, only deaths committed by Axis states and their allies should be included. Arguably, deaths committed by the Allies were in self-defense. In that case, then even if we included only killings by Germany and German allies (i.e., Italy, Romania, Bulgaria, and Vichy France) we're still left with a violent death rate of about 6 percent of the population, a devastating total. Naturally, one could not plausibly define killings by Europeans in overseas territories as "self-defense."