Poverty Does Not Cause Obesity

In a global perspective, there is no clear relationship between obesity and wealth. At middle- and high-income levels, diverse countries often display varying levels of obesity.  At the very lowest levels of wealth, of course, there is a clear relationship between wealth and weight gain:  extremely poor or war torn countries tend to have very low incidence of obesity because there simply is not enough food, or the economic supply chains have been destroyed and are unable to deliver food where it is demanded.

However, at levels of wealth above these low levels, cultural factors appear to be as important as wealth. For example, both Vietnam and Japan have an obesity rate of 3.5 in spite of a large difference in GDP per capita. Meanwhile, Greece, which is poorer than Japan, but richer than Vietnam, has an obesity rate almost eight times as high as both Asian countries (25.1 percent).

In the US, Poorer States Have more Obese People

Nevertheless, within the American context there has long been an effort by pundits and researchers to convince us that poverty causes obesity. The fact that many low-income subgroups also happen to be overweight or obese is used as evidence that the United States requires more government spending on a variety of programs ranging from public schools to health care. The first graph presents what seems to be an easy-to-see relationship between low amount of purchasing power and obesity rates at the state level: 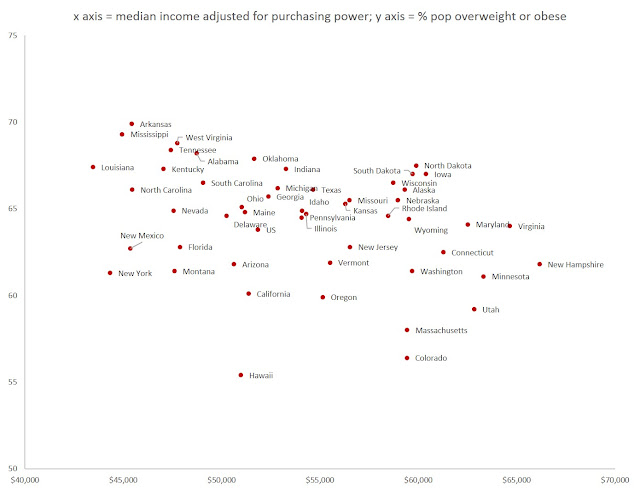 (Source: Income information is based on Census Bureau median income levels adjusted for purchasing power and cost of living according to Bureau of Economic Affairs data.)

There appear to be fewer overweight and obese people in states with high purchasing power. And, apparently, some states with the lowest purchasing power also have the highest obesity rates. The poverty thesis doesn't explain New York, Montana, or Florida on the graph, but it does explain Arkansas, Mississippi, and West Virginia. The data used here shows that Arkansas, for example, which is a low-purchasing-power state, has an overall obesity/overweight rate of 69.9 percent. This is well above the national rate of 63.8 percent. On the other hand, Massachusetts, a high-purchasing-power state, has an obesity rate of 58.0 percent. Overall, we see a slight drift downward in obesity rates as median income increases. 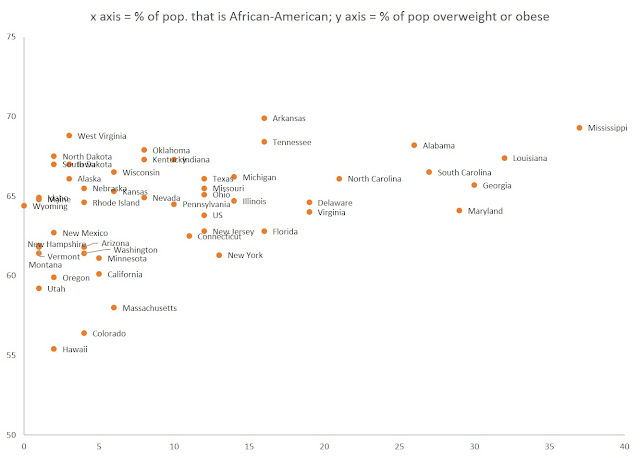 However, if we want to get insight into why some states have higher obesity than others, we could just as easily point to the proportion of foreign born in each state. Indeed, if we rely on purchasing power as an explanation of obesity, we have a hard time explaining why New York and California have such low obesity rates.

This problem goes away, though, if we look at percentages of foreign born instead: 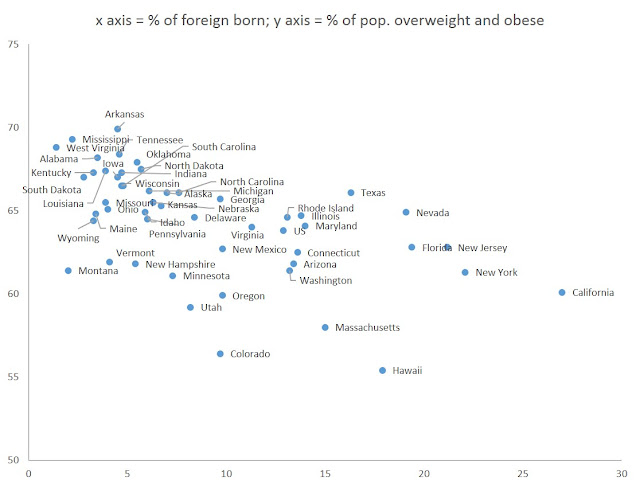 But do we have a theory to support our idea that immigrants bring lower-obesity rates with them? It turns out there is a lot of research to support this notion. This article notes: "Many studies of adult immigrants have found that obesity rates tend to be low at first but then steadily increase as immigrants spend more time in the country. This pattern is consistent with the idea that acculturation, or the 'Americanization' of health behaviors, leads to obesity."

There appears to be a connection between how much time a new immigrant family spends in the United States, and how overweight and unhealthy its members get.  For example, scientists have noted that Asian-Americans — which experience fewer obesity-related diseases than the general population —  begin to move closer to the general population in terms of health problems the longer they live here. In this study, for example, it is noted that Japanese-Americans overall tend to have very low incidence of cardiovascular problems, but that "third generation Japanese American immigrants are becoming more similar to those in whites."

As this 2012 Health Affairs study notes: second and third generation [immigrant] Latinos at all ages will have “higher mortality rates than members of their parents’ and grandparents’ generations.”

This happens in spite of the fact that new immigrants have lower earnings and median incomes than their children and grandchildren. In 2010, the median earnings for a foreign-born resident in the US was $33,130, compared to $42,328 for the native population. In a different measure, we note that the median income of of the native population in 2012 was $46,166, while it was $28,869 for non-citizens.

However, for these lower-income groups, obesity rates are lower than they are for the general population. It is not poverty that drives obesity rates in new immigrants, but acculturation to American dietary habits.

Not surprisingly then, mortality rates among immigrants are lower than the native population., and are tied to factors in the US that are not dependent on income levels or poverty. In fact, we know that among these lower-income immigrant populations, which also have diminished "access to health care," general health levels are actually higher than the native population. According to The Scientific World Journal:

Immigrants live 3.4 years longer than the US-born, with a life expectancy ranging from 83.0 years for Asian/Pacific Islander immigrants to 69.2 years for US-born blacks. Overall, immigrants have better infant, child, and adult health and lower disability and mortality rates than the US-born, with immigrant health patterns varying across racial/ethnic groups. Immigrant children and adults, however, fare substantially worse than the US-born in health insurance coverage and access to preventive health services. Suggestions and new directions are offered for improvements in health monitoring and for strengthening and developing databases for immigrant health assessment in the USA.

Some of this is explained by the "healthy migrant effect," but it is also likely that dietary habits from the country of origin die hard, so for adults especially it takes time for new immigrants to adopt a steady diet of Doritos and french fries.

Children of immigrants, on the other hand, which have not had the opportunity to develop un-American eating habits, are more prone to obesity.  This study shows that immigrant children do not have the same resistance to obesity that adult immigrants do.

And, increasingly in recent years, immigrants from Mexico have shown less resistance to obesity after moving to the US, which reasonably follows from the fact that Mexico's obesity rate has been climbing. But, of course, Mexico's obesity rate has not been climbing because Mexico is getting poorer, but because Mexico is getting richer. Extreme poverty in Mexico, for example, declined nearly ten percent from 2010 to 2012, continuing a long-term trend.

The immigrant experience illustrates that being poor, separated from friends and family, and working in difficult conditions, do not in themselves make one more overweight or more likely to die younger than the general American population. The fact that new immigrants both live longer and are less overweight shows that how a family eats is not simply a function of income. Moreover, something about immigrants appears to even make up for a lack of "access to health care." Immigrants access health care less, but their actual health outcomes are better.

It appears that a more important indicator of one's poor eating habits is how long one has lived in the United States and to what extent one has adopted the American diet.

As time goes on, however, immigrant families increasingly fail to prioritize the consumption and preparation of more simple traditional diets, and become more reliant on more expensive processed foods. These families may also over time adopt American recreational habits which involve watching large amounts of television and engaging in other sedentary activities.

It may also be that other aspects of American culture, such as drug abuse and smoking, may also take their toll. But given that new immigrant households typically come from an environment shaped even more by poverty than the new communities they move to, these unhealthy habits — if they are indeed new to the immigrant — cannot be said to be simply a function of income and poverty.

Given the experience of immigrants, it is clear that even those who come from countries with far lower median incomes are able to maintain a higher level of fitness than native-born Americans with higher incomes and more developed social networks.  We can't simply say that "poverty causes obesity" or that those who live outside middle-class white neighborhoods are powerless to obtain or prepare nutritious meals.