GET NEWS AND ARTICLES IN YOUR INBOXPrint
A
A
Home | Wire | Obesity Increases: Is Capitalism to Blame?

Obesity Increases: Is Capitalism to Blame?

"Americans are fatter than ever," CNN reports in its examination of the latest National Health Interview Survey by the Centers for Disease Control.

This will surprise no one who has been paying any attention at all to obesity data in the US in recent years.

According to the CDC, the percentage of the population that is obese has risen 11 percentage points (from 19.4 percent to 30.4 percent) since 1997. 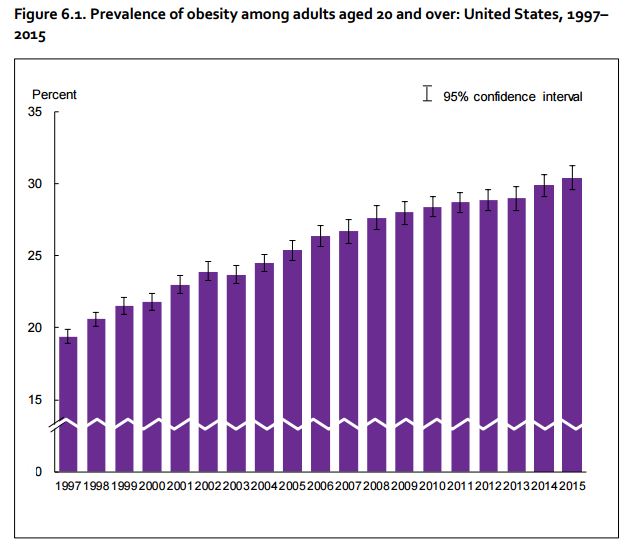 As with many social trends in the United States, obesity is not at all evenly distributed geographically. The CDC does not appear to have posted state-by-state 2015 numbers, but using the CDC's 2014 data on obesity, we find large disparities by state: 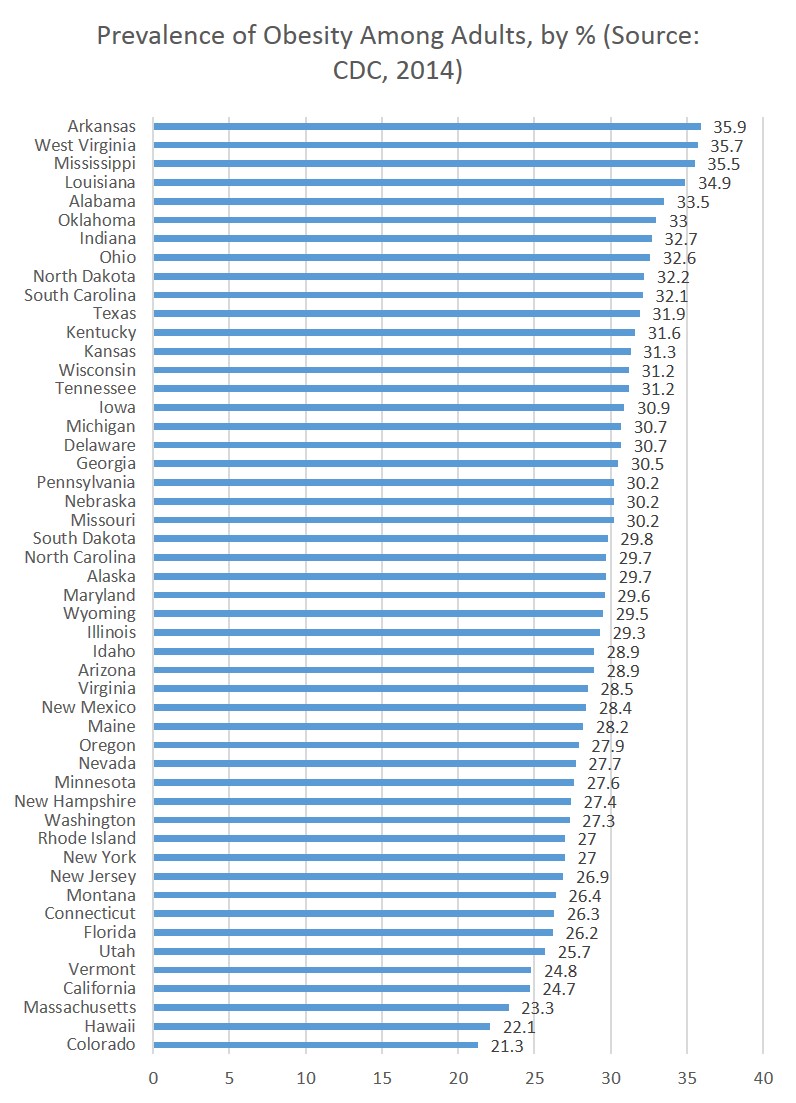 What to make of these patterns?

As I have noted in previous posts, there are any number of factors that could contribute to these patterns, from poverty rates to the percentage of foreign born in each state.

Mainstream media often immediately looks to poverty as a "cause" of obesity, and there does appear to be a mild correlation in that case: 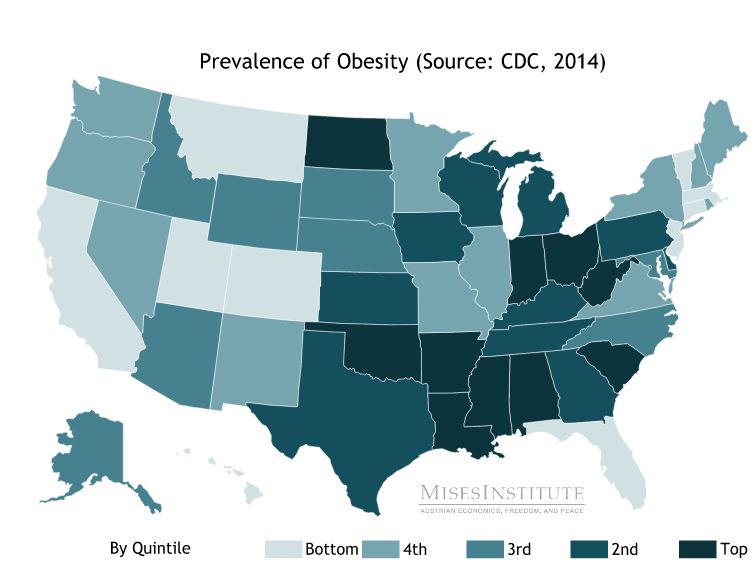 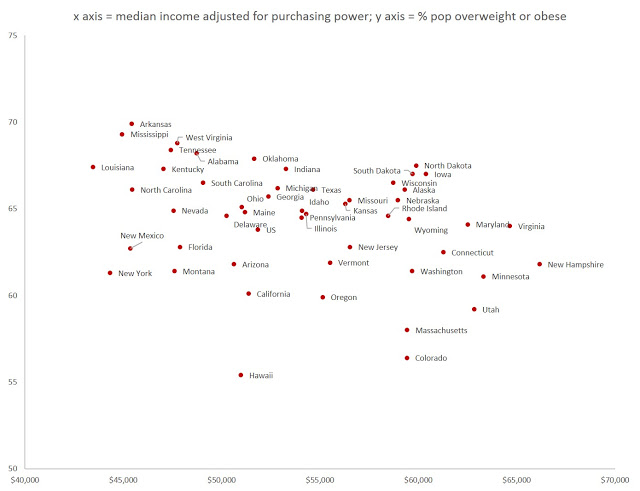 But, one can find an even clearer correlation if we look at percentage of foreign born in each state: 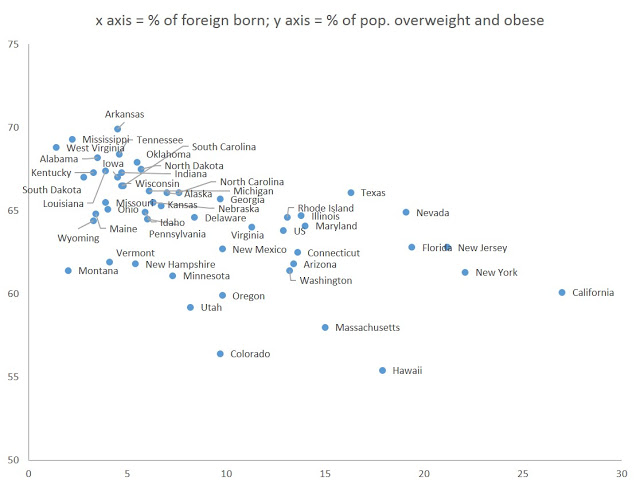 Indeed, if we're looking for the obesity culprit, we need look no further than the American diet. This is why many immigrant populations in the US — who are lower income in general than the native population — have lower obesity rates. Lower incomes do not drive new immigrants to obesity. In fact, immigrants remain thinner because they have not yet assimilated into the American diet.

In an unsigned editorial at the Wilson Quarterly called "Immigrating to Obesity," the editors conclude that

America would be better off if newcomers were innoculated against the national penchant for gobbling fries and shakes in front of the television. A shrewd public-health policy ... would aim to delay the erosion of the immigrant advantage.

The immigrant advantage, as the data shows, does erode over time, and by the third generation, immigrants, including even the notoriously well-eating Japanese-Americans, tend to become just as unhealthy as other native-born Americans.

Do the Poor Have Less Access to Healthy Food?

A supporter of the poverty-causes-obesity thesis might point to these finding and and say "well, that may be a factor, but surely poverty means less access to good food, and thus greater obesity levels." It's the old "food desert" argument that there's no place for low-income people to buy healthy food.

Unfortunately, for those who hold this position, the empirical data is less than clear on this point.

Writing for The Breakthrough — which is anything but a right-wing propaganda organ — Helen Lee takes a look at whether or not low-income households are really driven to eating unheathily by poverty:

Three more-recent studies, by the United States Department of Agriculture, researchers at the RAND Corporation, and myself (publishing in Social Science and Medicine), have all found that low-income neighborhoods have at least as many and often more grocery stores and supermarkets than do wealthier communities. One can certainly find poor neighborhoods with lower access to grocery stores and supermarkets than wealthier ones, but on average they appear to have equal or better access. More importantly, like the Cincinnati and RAND researchers, I found no statistical relationship between the availability of healthy food (at least as measured by proximity or density) and lower risk of obesity development.

Meanwhile, food stamp usage has exploded over the past decade as both Bush and Obama administrations made it easier for households to receive food stamps. In other words, in the modern United States, unhealthy eating is more about choices people make.

There is no shortage of grocery stores in low-income areas, and if there were, a population that demanded healthy food would support the creation of shops that catered to this sort of diet.

We see this all the time in ethnic enclaves where small markets that cater to Middle-Eastern or East African immigrants provide foods — foods that are often much healthier than American fast food — that cater to the immigrants' specific tastes.

As I examined in this article in the context of ethnicity-based discrimination, when markets fail to cater to the desires of a specific ethnic or immigrant group, new entrepreneurs step in to fill the void. This happen unless governments artificially drive up the cost of opening a business in those areas.

But don't let the data get in the way of the narrative which states that low-income people will buy whatever McDonald's Corporation tells them to buy. In its comments on Lee's article, The Wilson Quarterly summed up the issue in "Why We can't fight Obesity the Same Way We Fought Tobacco":

But anti-obesity campaigners decided to cast American eaters, specifically two demographics, as victims. “One was the innocent child, unable to resist the food industry’s predatory marketing tactics,” Lee writes. “The other was the low-income city dweller living in neighborhoods devoid of grocery stores and farmers’ markets in which the only dietary options were unhealthy ones.”

The victimhood narrative deprives people of agency. In reality, people shop where they want and eat what they please. “Most Americans, including the poor, typically travel beyond their neighborhoods to shop at the grocery stores associated with their class status,” Lee notes. Nor is it true that the poor can’t afford healthy foods; they choose not to buy them. “Lentils are as cheap as potatoes. Skim milk costs the same as whole milk.”

If we're looking for the cause of obesity and its ill effects, it simply won't do to lazily slap the word "poverty" on every problem and call it a day.

In a certain way, of course, capitalism is to blame for obesity. It has made such a large abundance of high-calorie food available at low prices, that the Western world has managed to shift from the age-old problem of "do I have enough to eat?" to "do I have enough high-quality healthy food to eat?" That's progress in itself, but as with many behaviors that bring risk such as eating unhealthy foods, many people aren't necessarily trying to maximize their life spans. Many are willing to exchange a longer life span for a shorter, more enjoyable one.

The Federal Government Toys With the Definition of "Obese"

Before we finish, we must note that, as with so much of what government agencies measure, obesity levels are subject to arbitrary changes and arbitrary categories that are not exactly based on objective and indisputable distinctions and measures.