For many years I—and other Austrians—have had to endure charges by monetarists that Murray Rothbard fudged the data to increase monetary growth rates during the 1920s in order to portray it as an inflationary decade.  As I argued (here and here) in an exchange with eminent monetary historian Richard Timberlake (here, here, and here) these allegations are baseless.   So, now it is with delicious irony that I draw your attention to an explosive article by three econometricians thoroughly debunking the empirical claim made by Milton Friedman and Anna Schwartz (FS) that the velocity of money in the U.S. has exhibited long-run stability for more than a century leading up to 1975.

Neil Ericsson, David Hendry, and Stedman Hood argue that dubious “data adjustment” in FS’s empirical models “dramatically reduced apparent movement of the velocity of circulation of money and . . . adversely affected the constancy and fit of his estimated money demand models.”  In other words, FS’s empirical case that the demand for money (the inverse of velocity) is constant, which FS painstakingly elaborated in three statistical tomes published from 1963 to 1982 and which is the linchpin of monetarism, has been exposed as statistical legerdemain.

FS adjusted the raw data to account for: 1. the sudden onset of rapid developments of financial instruments and institutions in the U.S. economy compared to the U.K. economy; and 2. short-run fluctuations in velocity associated with business cycles.   In adjusting for “changing financial sophistication,” Ericsson et al. point out, FS added a linear trend of 2.5% on money supply observations prior to 1903, but made no trend adjustment at all to the data after that year.  In the process, they “adjusted” the money stock for 1867 from its raw or unadjusted value of $1.28 billion to $3.15 billion.  This is a phantom increase of 246% on the observed money stock!  The result of this trend adjustment was to substantially suppress the effect of the precipitous decline in observed velocity of more than 50% from the early 1870s to 1903 on its variability over the entire period studied (1867-1975). Thus although the adjustment applies to only 30% of the period studied, it accounts for almost 75% of the total variance of velocity. (See the graph below.)

Ericsson et al. pose a series of embarrassing questions ignored by FS about the rationale for their adjustment procedure.  Why is the lack of financial sophistication in the U.S. judged with respect to that in the U.K. rather than in some other country?  Why is a constant annual improvement of 2.5% considered appropriate?  What evidence is there that the U.S. caught up to the U.K. precisely in 1903, even though the dollar’s international role continued to increase relative to that of sterling throughout the 1900s?  And, finally, why weren’t other economic variables potentially affected by financial sophistication, such as interest rates and income, not adjusted?

FS also averaged or “smoothed” all annual data over phases of the business cycle (either inflation or recession).  This procedure significantly reduced short-run fluctuations in velocity, primarily in the late 1870s-early 1880s and during the Great Depression and World War 2.  This enabled FS to argue that their “phase-average” models of monetary demand econometrically predict or “explain” more of velocity’s actual variations when compared to random walk models estimated on annual unadjusted data. Ericsson et al. counter that FS made a basic error of failing to account for their phase-averaging of the raw data when they calculated the “residual standard error,” that is, the variations in velocity not explained by the model. The standard errors of FS’s phase-average models must be adjusted or “rescaled” to permit comparison with each other and with models estimated on unadjusted data.  Once this correction is made, Ericsson et al. show, a random walk model on unadjusted annual data has a lower residual standard error and explains “more than 30% of what FS’s models do not explain.”  This result resoundingly rejects FS’s “claim that U.S. velocity is reasonably constant.”  This is reinforced by the fact that even FS’s adjusted velocity declines by 50% from the 1870s to the 1940s. (See graph below.)

The authors present other technical criticisms of FS’s empirical methods and go on to conclude:

Friedman’s adjustment of the observed U.S. money stock for financial sophistication greatly reduced the visually apparent non-constancy of velocity, but the resulting measured velocity is still highly non-constant, contrasting with Friedman’s claim that velocity was reasonably constant. . . . [U]nadjusted phase-average velocity varies by a factor of 3.9, and even adjusted velocity by a factor of 2.2.  It would thus be empirically misguided to base policy analysis on the assumption that velocity is constant.

So despite arbitrarily adjusting, averaging, and smoothing, i.e., fudging, the data, Friedman was unable to support one of the central claims of his life’s work that, as cited by the Nobel Prize committee, “the demand for money is in fact very stable.” 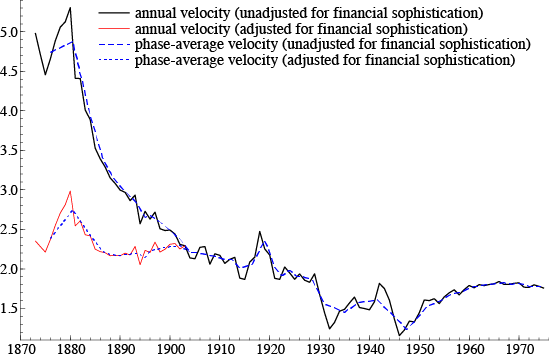