Ten years ago, South America was witnessing the rise of what came to be known as the "pink tide." Characterized by an allegedly kinder and softer version of socialism than the "red" communism of Castro's Cuba, the pink tide had begun with the election of Hugo Chavez in Venezuela in 1998, followed by the election of Lula da Silva in Brazil in 2002, and followed by the rise of the Kirchners in Argentina in 2003. The tide continued to roll in with the election of Evo Morales in Bolivia in 2006, and Rafael Correa's election in Ecuador in 2007.

As these new leftist candidates gained traction, their success was said to herald a new era of leftist politics in South America that would bring to an end the "neoliberal" consensus and impose a new, more humane economics on Latin American society.

The economy of Venezuela is in seemingly terminal decline with riots, shortages, and enforced slave labor imposed in an attempt to force more production out of the population. Meanwhile, the economies of Brazil and Argentina — while not comparable to Venezuela — are among the worst in Latin America, with Brazil heading for its its worst depression since 1901.

As economies worsened, corruption and authoritarian tactics worsened as well. Venezuelans have gotten the worst of it with citizens groaning under the weight of a police state that shuts down small business and persecutes even the smallest entrepreneurs for alleged economic "crimes" such as being a "class traitor." In her final years, Kristina Kirchner became increasingly autocratic and paranoid, going so far as to prosecute and impose fines on economists who made economic forecasts the Argentinian state found to be be unflattering. Meanwhile in Brazil, corruption reached new heights as President Rousseff — the pink-tide successor to da Silva — attempted to save the economy and her political career by showering her political allies with "stimulus" cash.

The Hard-liners Give the Worst of It

Much of the most serious damage has been limited to Venezuela, Brazil, and Argentina, however, as it seems the pink tide was never quite as deep or strong as many suspected it to be.

Correa and Morales, for instance, while spouting Marxist rhetoric, proved to be more pragmatic rather than ideological, opting for more restrained reforms that still left room for the more standard fare of so-called neoliberalism, such as expanded international trade and relatively restrained government budgets.

In contrast, Venezuela's regime committed itself to revolutionary changes in its economic and political systems while the Kirchners clamped down on free trade, manipulated exchange rates, imposed capital controls and persecuted political enemies. Brazil expanded government spending to new highs.

Over the past decade, we saw the rise of two different blocs in Latin America. There were the more market-oriented economies, found in Chile, Colombia, Peru, and Uruguay. In some cases, these countries elected avowed leftists as well. But, even these center-left governments tended to lean toward expanded trade or benign neglect toward informal economies and the business sector.

Some countries — Chile, Colombia, Peru, and Mexico — after years of consistent growth and stable politics, were even christened the "Pacific Pumas" in a play on the "Asian Tigers" moniker of the 1990s. 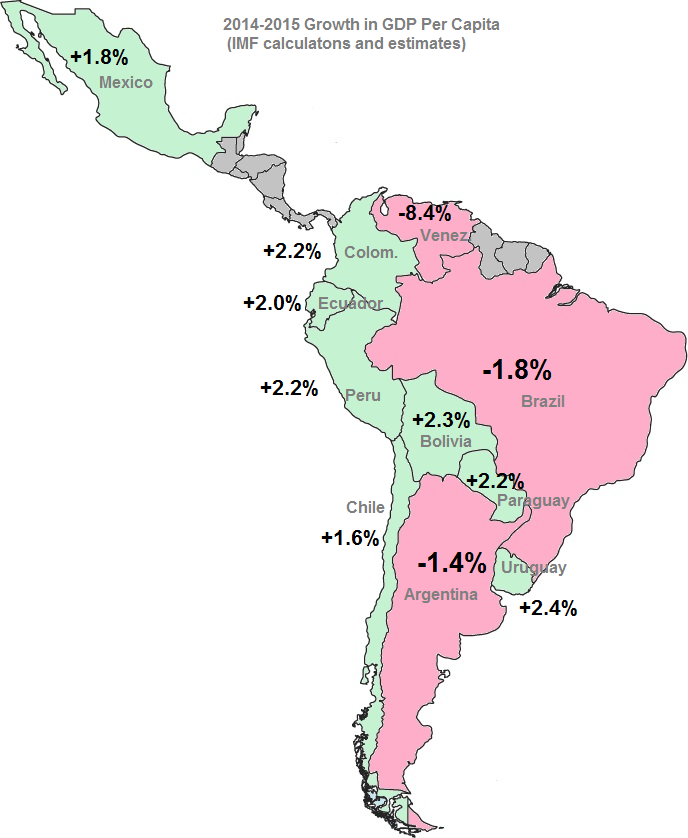 Of course, this is just a snapshot of a trend that has continued for several years. The committed pink tide countries have foundered while the more pragmatic, restrained, and trade-oriented regimes have seen far better growth trends: 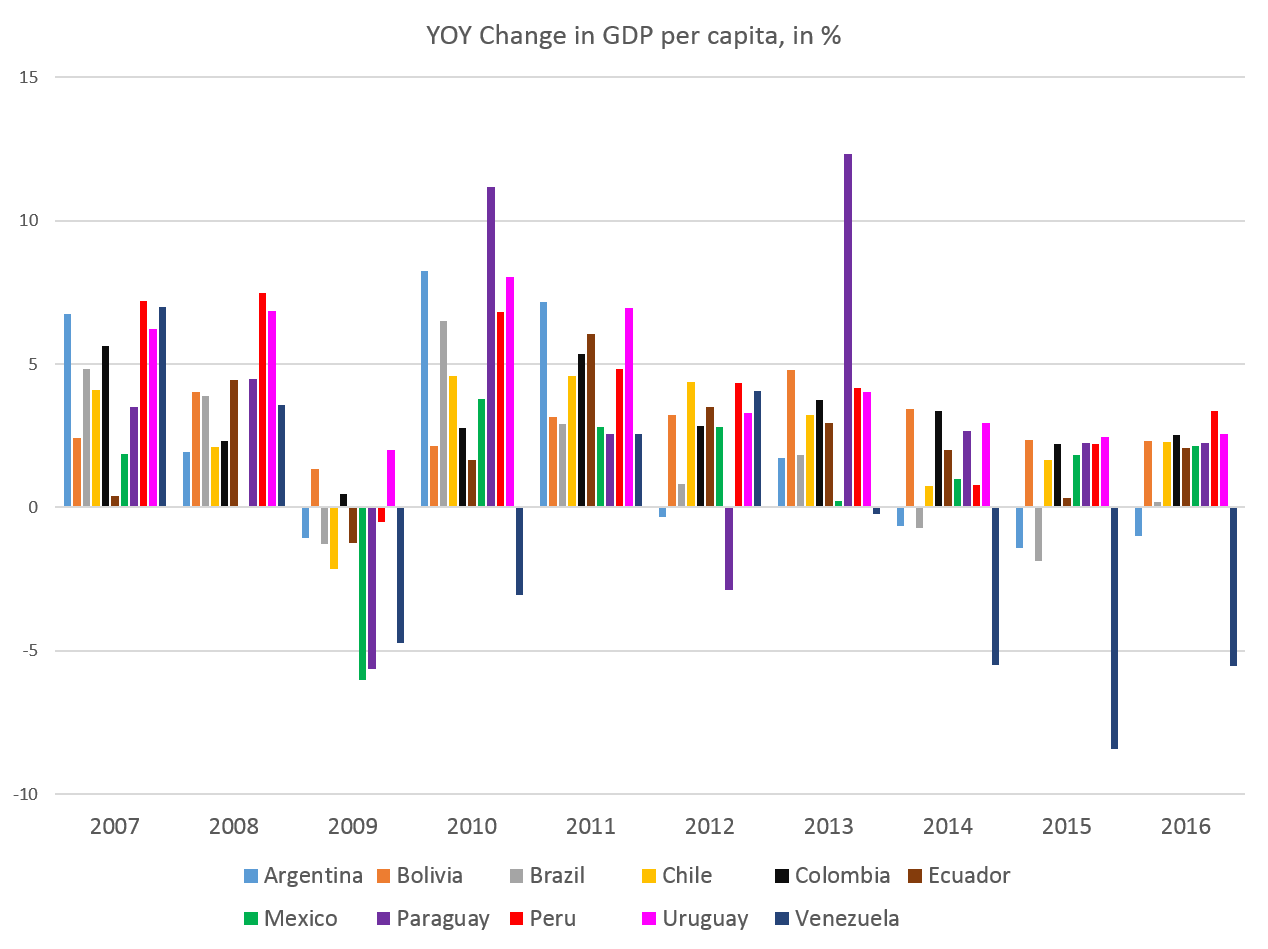 The next graph shows trends in GDP per capita since 1990. In this case, I have taken the same per capita GDP values and indexed them, with a base year of 1990 to give us a view of growth over the past 25 years.

In this case, we find that countries that were less committed to the pink tide experienced the most growth. The top three countries for growth by this measure are Chile, Peru, and Uruguay. Argentina had been keeping pace with Peru, but has gone into decline since 2011, and now is about equal to Colombia in terms of growth.

Indeed, there has been generally unabated growth for all countries shown here except for Argentina, Brazil, and Venezuela. All three of the leading "pink tide" countries show distinct downtrends in recent years, with no growth at all over the past five years. Venezuela is in the worst position with no net growth at all in 25 years. 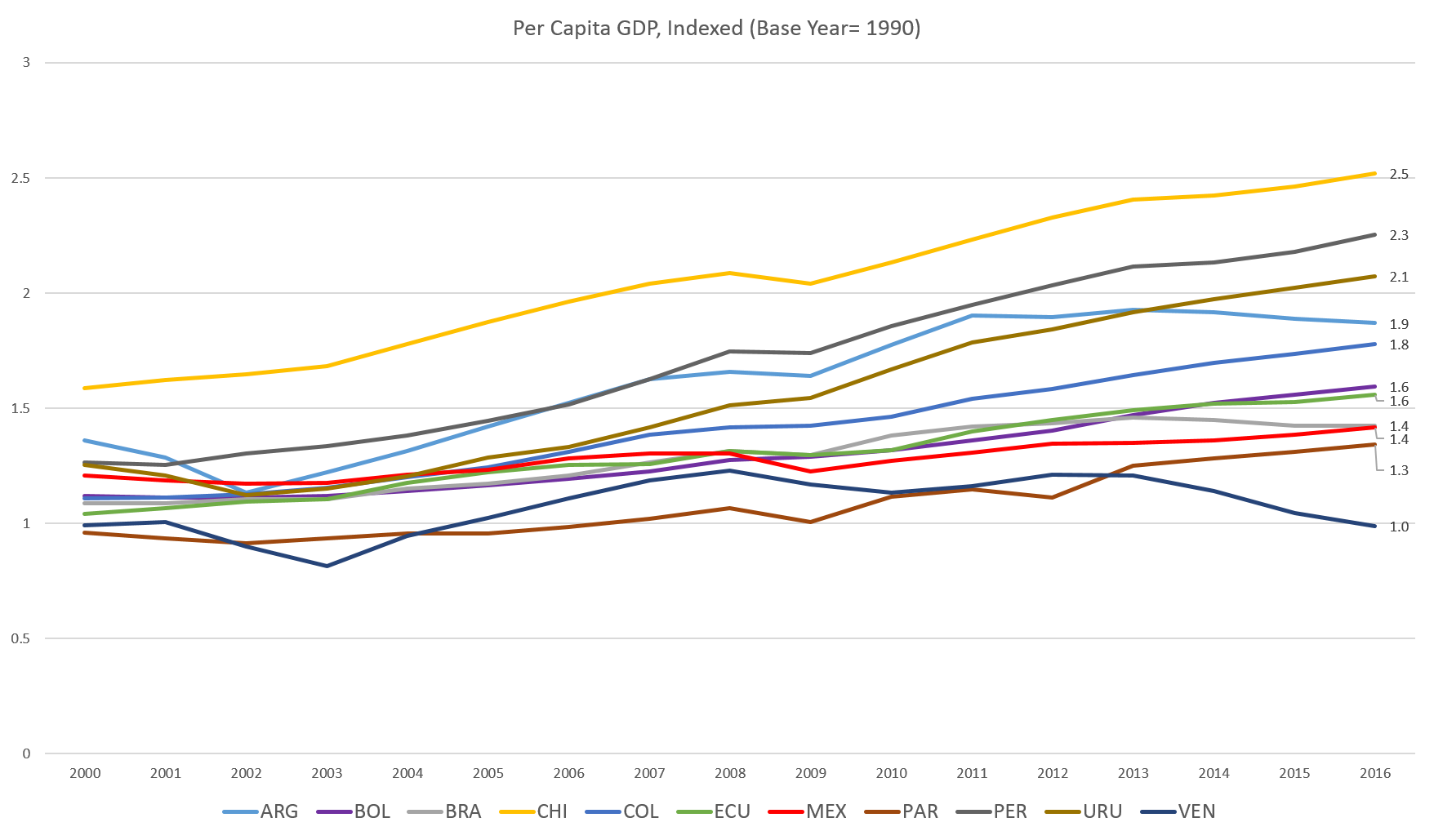 For help in reading the graph, here are all countries by index value in 2016, and by percentage growth since 1990 (GDP per capita):

Naturally, not everything can be explained simply by the politics of the past decade. There are always other major institutional issues, and even military issues, as in the case of Colombia's recently-ended conflict with FARC rebels. Mexico's War on Drugs continues to be a significant drag on growth.

Moreover, it is also too simplistic to slap easy left-right labels on regimes, since the brand of socialism practiced in Venezuela is significantly different from that practiced by the Peronists in Argentina. Clearly, political institutions in Brazil are relatively less authoritarian than those in Venezuela. Even worse would be to go off mere political party labels as in the case of the Socialist Party in Chile, which currently controls the presidency in that country. The "Socialist Party" in Chile is best described as mildly center-left by modern standards, and party members should obviously not be lumped together with the Chavismo socialists of Venezuela.

Nevertheless, whether called Peronista or Chavismo, regimes more committed to populist, third-way, and socialist political action in practice are, not surprisingly, coming up against some of the disastrous economic side effects of their policies.

Of course, we can't prove anything by demonstrating correlations, which is why we must rely on sound economic theory as well.