This past Tuesday afternoon, I was speaking with a reporter who was interested in the positive effects of infrastructure spending that occurred in the form of fiscal “stimulus” in my part of the country, back during the dark days of the Great Recession, around 2009 and 2010. How did this help our region, he wanted to know?

My answer: It didn’t help very much, and that if it did, then (a) it didn’t matter because the growth was not sustainable — it would have stopped when infrastructure spending stopped; (b) you would have to balance any seen positive economic activity with unseen, decreased economic activity on the part real people coerced to finance the stimulus; (c) it may have delayed the correction to the extent that it allowed business owners and workers to put off making tough choices based on market signals: and (d) you would have to believe economic growth is something that occurs due to infrastructure spending as opposed to the development of property rights institutions, saving, time preference, the specialization and division of labor, and so on.

Tonight I’m calling on Congress to produce a bill that generates at least $1.5 trillion for the new infrastructure investment that our country so desperately needs. Every federal dollar should be leveraged by partnering with state and local governments, and where appropriate, tapping into private sector investment, to permanently fix the infrastructure deficit. And we can do it.

Then it made sense. Infrastructure spending and its effects on the economy were pre-speech talking points, as were the Keynesian biases that this spending tempered the severity of the Great Recession, and would likely provide an economic boost in the future.

Rest assured, it’s not true. The fact is that federal, state, and local spending on transportation infrastructure is well into the tens of billions each month. As the chart below shows, this spending increased to over $25 billion a month in 2011, during the heyday of QE2. This number has only increased over time, as the average spending over the last two years has been just under $30 billion a month. 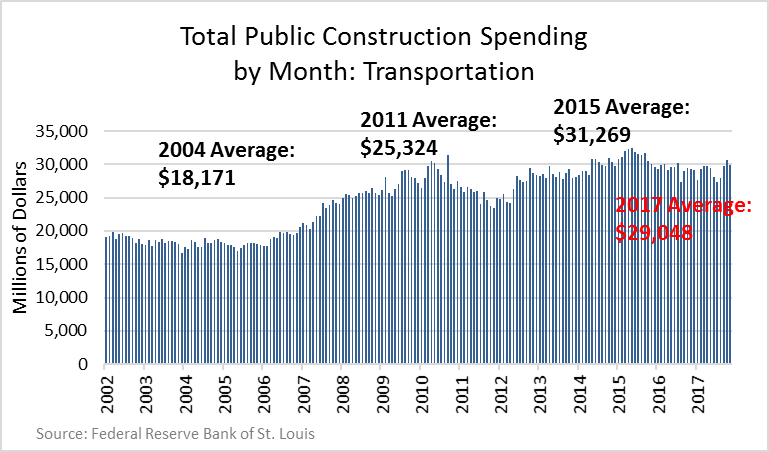 Let’s admit it: If infrastructure spending promoted economic growth, the US economy would resemble a modern day Incan Empire. But to argue as much would be to claim that industrial revolutions occurred in the past mostly because the mass of workers were relieved, by force, of a portion of their wealth to finance new turnpikes, canals, and railroads.

It would take the advent of the 20th century Progressivism and the overweening nation-state that transportation functions became the domain of public-sector cartels. We should view this development as the exception, not the rule. As Walter Block wrote in The Privatization of Roads and Highways, "we must realize that just because the government has always built and managed the roadway network, this is not necessarily inevitable, the most efficient procedure, nor even justifiable."

To be fair to Trump, he is at least promoting an issue that was a common talking point as a presidential candidate. At the time, my reaction was twofold. On the one hand, if the Feds must waste billions of dollars, better it be within our shores than overseas.1 (Why should the military-industrial complex always get the loot?) On the other hand, Candidate Trump’s focus on infrastructure expansion contradicted his criticisms of the ruling class, which he considered subservient to special interests. To assume that special interests don’t similarly influence infrastructure spending is naïve, in the least.

People who are “like, really smart,” like Trump, get this better than anybody. But why the regime focus on infrastructure? A couple of possibilities come to mind.

First, wasteful infrastructure spending is at least visible. When taxpayers read about billions of dollars being misplaced in Afghanistan, for instance, it is seen as a zero-sum game. With the exception of “bridges to nowhere,” many people believe domestic infrastructure spending provides at least some net benefit — even when they acknowledge its unseen costs. The federal government has long had a difficult time justifying its very existence in the post-Cold War world. Infrastructure might then serve the propaganda purpose today that the Space Race served in the 1960s.

Second, the political class loves infrastructure spending because it can be so easily targeted, even down to the level of zip code. The ability to direct tens of millions of dollars in conscripted capital to politically important regions of the country is a godsend to a ruling class that depends on the support of key constituencies. While politicized spending dates back to the Washington administration, I have always admired the late Jim Couch’s important research on its effects in centralizing power during the New Deal.

Given that infrastructure projects most always employ large numbers of local workers, this spending serves as a way for the State to maintain popular support by a large class of workers whose livelihoods now depend on federal spending. If a government that robs Peter to pay Paul can always depend on the support of Paul, then Trump’s proposal guarantees a good number of Pauls — a bought-and-paid-for voting bloc.

While the Pauls can be identified, they should nonetheless be ignored. As Rothbard wrote in For a New Liberty (p. 387), “the chances of converting those who are waxing fat by means of State exploitation are negligible, to say the least. Our hope is to convert the mass of the people who are being victimized by State power, not those who are gaining by it.” Trump is at his populist best when he appeals to the victims. Unfortunately, he is at his populist worst when he adds to infrastructure spending already out-of-control by creating new divisions in society between the productive and parasitical classes.

Why is this? Because in this new political era, a divided, unproductive government is one of the few things that most unites us, while a government united behind welfare or warfare boondoggles — including infrastructure spending — sow division. It’s no mistake that these divisions have increased as the institutional constraints on the redistributive state have been removed.

Infrastructure is an effect of wealth creation, not its cause. Confusing this point is the road to hell, not prosperity, which is, as The Donald might say, “Sad!”

What Happens When Central Banks Attempt to Tighten? Even More Resource Misallocation

Popular economic wisdom says central banks can counter harmful effects of inflation by raising interest rates. Unfortunately, such moves carry their own forms of misallocation of resources and capital.