GET NEWS AND ARTICLES IN YOUR INBOXPrint
A
A
Home | Wire | If American Federalism Were like Swiss Federalism, There Would be 1,300 States

If American Federalism Were like Swiss Federalism, There Would be 1,300 States

In a recent interview with Mises Weekends, Claudio Grass examined some of the advantages of the Swiss political system, and how highly decentralized politics can bring with it great economic prosperity, more political stability, and a greater respect for property rights.

What the American tends to miss, however, is that the scale of political units in Switzerland is much, much smaller than that found in the United States. When a Swiss person talks about how Swiss politics is based largely around the cantonal level of government, what he's really telling us is that Swiss politics is centered around a political unit that is often the size of a small American city.

While we may often equate a Swiss canton with an American state, the truth is that even the smallest US state by population (Wyoming) is larger than all but four of the 26 Swiss cantons.

In contrast, the largest Swiss canton (by population) is Zurich, with a population of 1.5 million. That makes it smaller than all but 11 US states.

But most Swiss cantons are much smaller than this. Indeed, the median population for Swiss cantons is 234,000 people, or the size of Irving, Texas or Gilbert, Arizona. (The average is 324,000). The smallest canton boasts a mere 16,000 people. 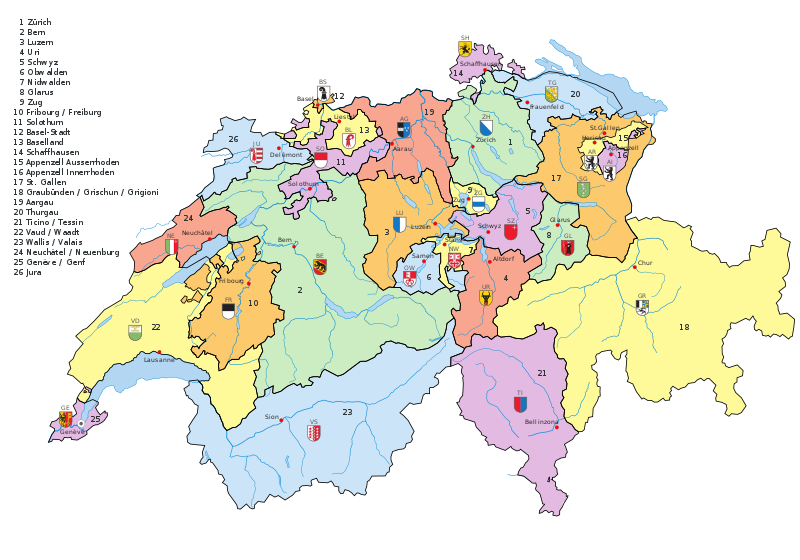 Obviously, then, in terms of size and scope, American states are much much larger than Swiss cantons in general.

In the United States, the median population size for a state is 4.5 million, or more than 20 times the median size of a Swiss canton. (The average US population per state is 6.4 million).

Needless, the say, in Switzerland, when we're talking about the cantonal level, we really are talking about local government in contrast to US states where even sparsely populated states like South Dakota are considerably larger than all but the two largest cantons, while being vastly larger in terms of physical geography.

If the United States were composed of states approximating the median population size of Swiss cantons, the US would have over 1,300 states total. Each would have a population of around one-quarter of a million inhabitants.

Given the small size of these political subdivisions, the potential for taxpayers "voting with their feet" is even greater than it is in the US, where it is already likely that migration patterns often show preferences for states with lower tax and regulatory burdens.

The size of political jurisdictions has significant implications for political representation as well.

In an earlier article titled "The US Should Have 10,000 Members of Congress" I noted that the United States has an exceptionally high politician-to-citizen ratio.

Specifically, in the United States, there are 535 Members of Congress who allegedly represent 320,000,000 people. This means there are 598,000 US residents per member of Congress. Meanwhile, in Germany, there are 130,000 residents per member of the national legislature. In Canada, the number of 99,000. In Switzerland, the number is 33,000. (The US is so off-the-charts, I've excluded it from this graph for the sake of scale): 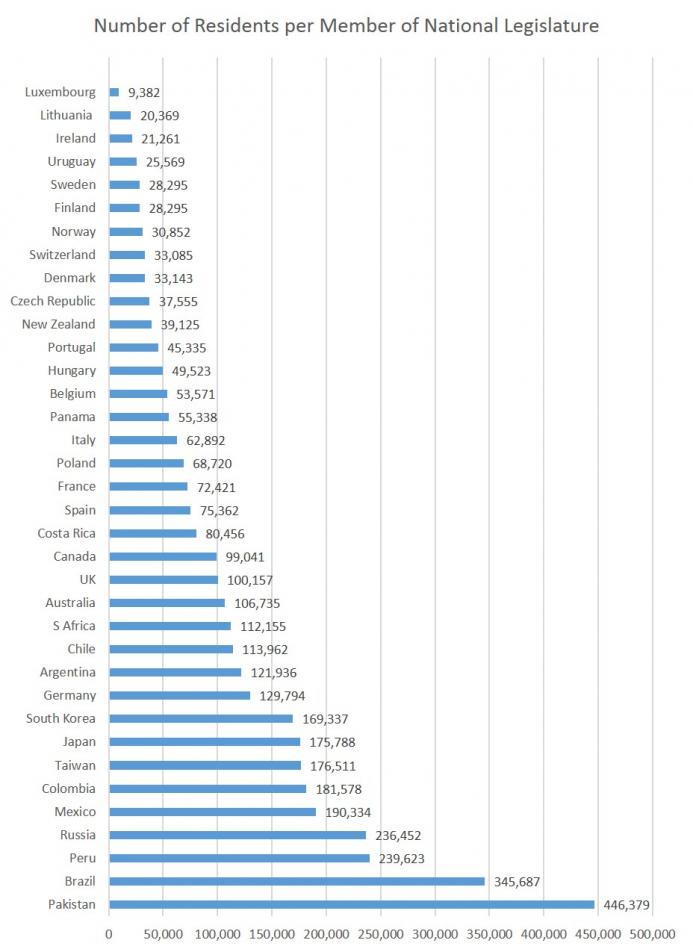 Moreover, the number of legislators compared to the overall size of the population is now tiny compared to what was expected at the time the US Cosntitution was written:

In 1790, members of congress represented on average 37,000 people. In Massachusetts in 1800, for example, there were 422,000 people sharing 16 members of Congress. Senators were not directly elected at the time, however, so if we include only members of the House, the average constituency size in Massachusetts in 1800 was 30,142. To reach a constituent size like this today, the US Congress would require 10,000 members.

Nor is this just an issue for the national legislature.

Electoral districts are also huge within US states, when compared to the number of members of cantonal legislatures in Switzerland. 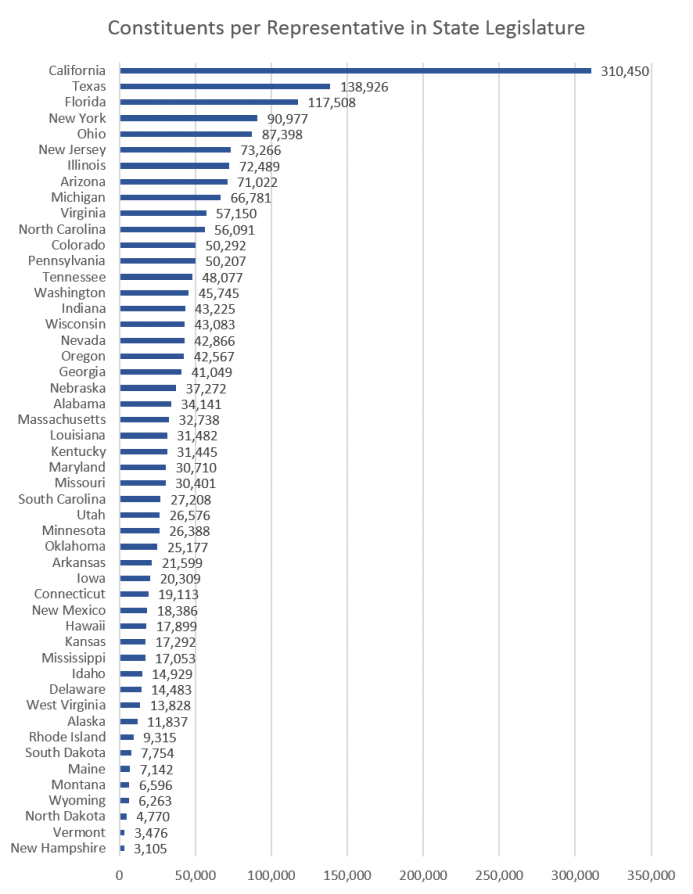 For example, in the US, the number of residents per state legislator ranges from 3,105 in New Hampshire up to a gargantuan 310,000 in California. 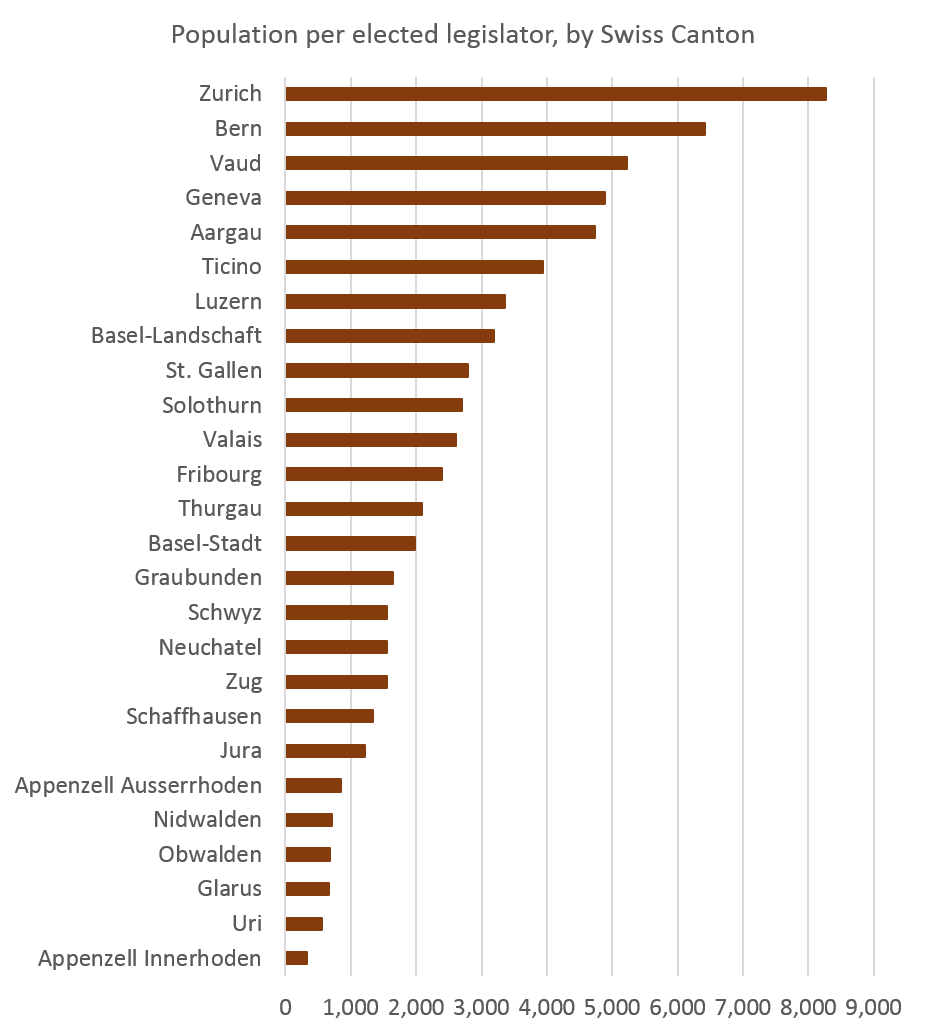 In Switzerland, the number of Swiss residents per cantonal legislator ranges from 8,200 in Zurich down to a miniscule 327 in Appenzell Innerhoden.

But rather than look just at extremes, let's consider a mid-sized Swiss canton and a mid-sized US state.

In other words, in Switzerland, it is entirely reasonable to expect that one's cantonal representatives be familiar with one's neighborhood, local culture, and local concerns. One might even expect to run into his legislator on the street, especially if he's representing only 2,000 or so other people. The number of voters per legislator, of course, is even smaller.

In the US, on the other hand, even a state legislator often represents a small city, in terms of his or her constituency size.

Members of Congress are far worse, with each member representing a population equivalent in size to a Fresno, California, or Tucson, Arizona.

When we look at differences in the size and scope of political and electoral jurisdictions, we find that in many cases, US jurisdictions are ten or twenty times the size of what they are in Switzerland.

These vast differences in geography and demographics may highlight some of the realities that underpin many of the political and institutional differences that divide Americans and the Swiss.

Both the United States and Switzerland employ a federal structure. In many ways, however, the Swiss political system is far more decentralized than is the American. There is no single executive in Switzerland, for example, and policy continues to be highly decentralized, with cantonal governments exercising large amounts of control and influence within the fields of naturalization, culture, public finance, and healthcare.

Moreover, when we speak of the cantonal level in Switzerland, we're really referring to what an American would recognize as the local level in politics. Swiss cantons are usually equal in size to a small American metropolitan area.

On top of this, political representation is hyper-democratic by modern American standards (but not necessarily historical American standards), with many cantonal legislators representing perhaps only 1,500 residents in many cases.1

The implications of this reality are significant. Given the small and local nature of government, and the smallness of electoral districts, voters have a completely different relationship with government institutions.

For example, when local government amenities are funded largely by one's local cantonal government, this means that government services — including social benefits like healthcare subsidies — are funded not by some other anonymous taxpayer living hundreds or even thousands of miles away. A small cantonal size means taxpayer-funded amenities are funded by one's neighbors, and other living nearby with whom one is likely to interact peacefully on a daily basis. In cases like this, it's more difficult to see democratic politics as a matter of getting as much as one can get out of some distant, faceless "oppressor."  When important political institututions are close to home, and at a human scale, one might feel more inclined to take an additude of stewardship toward one's community rather than an attitude of "take the money and run."

In fact, constituency size has been shown to correlate to government spending in many cases, as shown in research by Mark Thornton, George S. Ford, and Marc Ulrich. See here and here.

[T]he evidence is very suggestive that constituency size provides an explanation for much of the trend, or upward drift in government spending, because of the fixed-sized nature of most legislatures. Potentially, constituency size could be adjusted to control the growth of government.

Other factors mentioned by Thornton, et al. and others include: