Homicide rates in the United States have been declining for 20 years as the number of privately-held guns in the US has increased substantially.

In some states, such as New Hampshire and Oregon, which have very weak gun laws, homicide rates are remarkably low, and these states are among the safest places on earth.

As homicide rates have declined, however, and gun-related homicides with them, gun-control advocates have attempted to create a new category of "gun violence" by blaming suicides on access to guns.

Most "Gun Violence" Is Suicide

Note this recent article from The Washington Post which casts suicide as indistinguishable from homicide, and goes on to point out that there were as many firearm related deaths in 2014 as there were deaths that resulted from automobile accidents.

The article rightly notes that thanks to medical science and safety features on automobiles, deaths from car accidents have gone into steep decline in recent years. The article then notes that suicides have been increasing over the same period, but then attempts to connect this rise with access to firearms.

The article never explicitly says that suicides are indistinguishable from homicides, of course — since any rational person can see a large and obvious distinction —  but it does imply the two are more  or less the same by classifying both firearm-related suicides and firearm-related homicides as "gun violence."

Employing the usual lazy methods of mainstream journalists, The Post fails to provide hard numbers or to direct links to sources, so I'll do it for you:

To come up with this new category of "gun violence" The Post combines the CDC's statistics of firearm suicides (a total of 21,175 in 2013) to the total of gun homicides (a total of 11,201 in 2013). Then it compares this total to the number of accidental automobile deaths, which was 33,804 in 2014. (The article claims there is new 2014 data from the CDC showing more gun deaths than automobile deaths, but the CDC web site has not been updated to reflect this.)

So, yes, according to the CDC, the number of gun-related deaths and the number of automobile deaths are similar — but only if suicides are included.

Contained in all of this, however, is the implied conclusion that were it not for such easy access to guns, the suicide rate in the US would be lower. This is of course pure speculation, and rather baseless speculation at that.

More Guns, Less Suicide Than Much of Europe

Certainly, if we compare the US to other countries, we have no reason to believe that suicides in the US are unusually common. Indeed, the US is very unremarkable in terms of suicide rates. Deborah Azrael at the Harvard Youth Violence Prevention Center has said "cut it however you want: in places where exposure to guns is higher, more people die of suicide." But, for anyone who can do arithmetic and make simple comparisons, this claim is easily shown to be bunk: 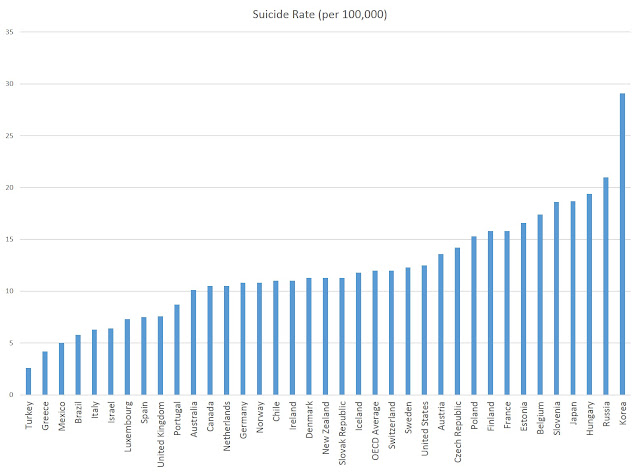 The US comes in between gun-restrictive countries Sweden and Austria, and, of course, has a suicide rates far below that of Japan which is often held up as a paradise of gun-free non-violence. Korea, where privately-owned guns are nearly non-existent, has one of the worst suicide rates in the world. The US also has a suicide rate about equal to Switzerland, which in spite of its reputation as being a country of gun-toters, is estimated to have less than half as many guns per capita as the United States.

Nevertheless, lumping suicides in with homicides is a key component of anti-gun propaganda. The Brady campaign, for example, does not employ homicide rates in its state-by-state analysis. If it did, it would find that the states with the least amount of gun control often have the lowest homicide rates. Instead, Brady relies on "gun violence" rates, which allows it to count states with rock-bottom homicide rates, like Idaho and Vermont, as states with lots of "gun violence." (In the US, altitude appears to correlate more with suicide than gun ownership.)

This is a tricky sleight of hand maneuver, of course, since, when we're talking public policy, what people fear are homicides, not suicides.  Even Noah Smith, the Austrian-economics-hating, left-of-center finance blogger admits that classifying suicides as "gun violence" is stretching things a bit:

With accidental gun deaths steady at around 500-600 per year, the bulk of those 32,000 "gun deaths" are suicides...In fact, murder by gun has been falling steadily since the early 1990s. Some of that is due to improvements in emergency medicine, but most is a result of the overall decline in violent crime that America has enjoyed over the last two decades. The fact that overall gun deaths has risen since 2000, despite the fall in murders, suggests that increased gun suicide has accounted for more than 100% of the increase in gun deaths. Obviously, suicide is a tragedy, and I don't want to minimize it. But people aren't panicking over suicide, they're panicking over murder, and gun-related murder is on the way down.

(By the way, in 2013, accidental deaths by firearms was 505 (according to the CDC). That's out of a total of over 130,000 accidental deaths in a country of 300 million people. In other words, the accidental gun-deaths total is extremely small.)
Won't Somebody Think of the Children?

But what about little Johnny? Maybe he won't commit suicide if there are fewer guns around.

First of all, in regards to teenage suicide, we know that the United States is unremarkable in this measure as well.  In the 15-19 age group, suicides are less common in the US than in 14 OECD countries (plus Russia): 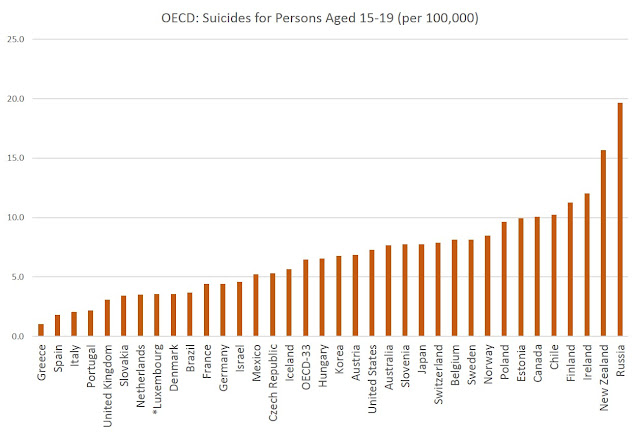 Moreover, according to the CDC, intentional self harm (suicide) using a firearms is less likely in the lower age groups than suicide by some other means. In the 15-24 age group, for example, more suicides happen by means of something other than a firearm (6.1 per 100,000) than by firearm (5 per 100,000). This is true for all the younger age groups, and we only find that firearms suicides become more common than non-firearm suicides in the 55-64 age group or above.

More alarming for parents should be the fact that deaths by prescription painkillers alone (whether suicide or accidental) totaled 16,000 in 2013.  If we include drug overdoses in general, the total balloons to 46,000 deaths (suicide and accidental) which means that government-controlled or prohibited substances account for more than twice as many deaths as gun suicides, and more than four times as many compared to gun homicides. 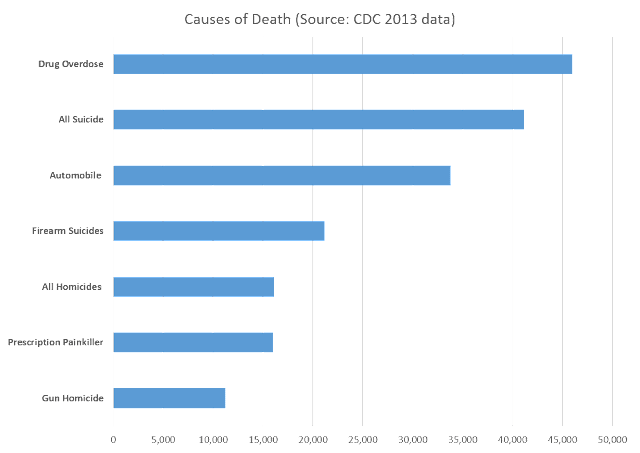 Moreover, it is hotly debated as to whether or not anti-depressants might actually increase the likelihood of suicide. There are only a handful of studies on the matter, and they tend to contradict each other.

Given the lack of knowledge over the causes of suicide, perhaps it might make more sense to take a look at why people commit suicide than to fixate on the methods people might use. This appears to be especially obvious given that lack of access to a gun clearly does not prevent the very high suicide rates in Japan and Korea.

Even more illogical is the fact that many advocates of gun control who pretend to be greatly concerned over suicide, actually applaud suicide in other contexts, and in some cases, those who claim to be advocating for fewer suicides via their opposition to guns, simultaneously will advocate for more suicide in the form of "assisted suicide" and euthanasia laws.

When Brittany Maynard opted to kill herself rather than suffer from brain cancer, she was treated as a hero by many on the left, and "assisted suicide" has long been a project of the left, which seeks to make suicide easier. We also often hear about how "progressive" Belgium is, where the elderly and children are encouraged to embrace euthanasia.

So, for the pro-suicide, anti-gun party, they should stop pretending to be concerned about suicide, but should instead admit that they merely object to the means of attaining it. They simply want people to die by some other method. That's fair enough, and if adults wish to contract with someone else to poison themselves, that's not the state's business. Indeed, if there are people who would prefer suicide using a third party instead of a gun, it is not legitimate for the state to prevent that. At the same time, let's stop pretending that people who applaud Brittany Maynard while decrying suicide as "gun violence" are interested in suicide prevention. They're not.