The Great Gatsby and the Fed

Even the most innocent novel can give its reader a fresh perspective on the economy during the author’s time. Economic writings and economic conditions often inspired great writers who, in turn, allowed us to contemplate either a glimpse or a detailed picture of economic reality. Stendhal was influenced by Malthus, Flaubert by Bastiat, and Ayn Rand by Mises. Other novelists faithfully described the economic times of their lives. Émile Zola, for instance, brilliantly accounts for the French 1882 financial crisis in his novel L’Argent (1891) and unconsciously exhibits the evils of fractional reserve banking.

Just as Zola’s L’Argent, so too F. Scott Fitzgerald’s The Great Gatsby (1925) is a product of the business cycle. Some have interpreted Fitzgerald’s novel as an indictment against capitalism. It is not. It has been said that Gatsby is a product of alcohol prohibition, but Gatsby is also the unfortunate product of the Federal Reserve’s expansionist monetary policy. The “constant flicker” of the American life described by Fitzgerald in his celebrated novel is no less than the artificial boom driven by the Fed during the roaring twenties.

Inequality and the Fed during the Twenties

Under modern central banking, money is created and injected into the economy through credit on financial markets. Thus, the economics of Cantillon effects tells us that financial institutions benefit disproportionately from money creation, since they can purchase more goods, services, and assets for still relatively low prices.

One of the most visible consequences of this growth of financial markets triggered by monetary expansion is asset price inflation. Increases in asset prices will mainly benefit the wealthy for several reasons. First, the wealthy tend to own more financial assets than the poor in proportion to income. As the wealthy’s net worth increases, securities with continuously rising prices can be used as collateral for new loan requests. Second, it is easier for the richest individuals to contract debt in order to buy financial assets that can be sold later at a profit. Since credit-easing lowers the interest rate and therefore funding costs, the profits made by selling inflated assets bought on credit will be even greater. Finally, asset price inflation coming with the growth of financial markets will benefit the workers, managers, traders, etc., in the financial sector.

Not surprisingly, the development of ostentatious wealth and extreme inequality is one of the main themes in The Great Gatsby — which was published and written during the boom that would finally lead to the Great Depression. In his bestseller on the causes of the “Great Crash” of 1929 and the subsequent Great Depression in the United States, John K. Galbraith mentions “the bad distribution of income” as the first of “five weaknesses which seem to have had an especially intimate bearing on the ensuing disaster.” The cause of this rising inequality is to be found in asset price inflation.

The responsibility of the Fed in the asset price bubble of the 1920s cannot be doubted. Indeed, as late as 1927, Benjamin Strong, who was then governor of the Fed, told the French economist Charles Rist that he was going to give “a little coup de whiskey to the stock market.” Similarly, the former chairman of the Fed, Marriner S. Eccles, points to the rising inequality financed by credit expansion during the 1920s, when, “as in a poker game where the chips were concentrated in fewer and fewer hands, the other fellows could stay in the game only by borrowing. When their credit ran out, the game stopped.” 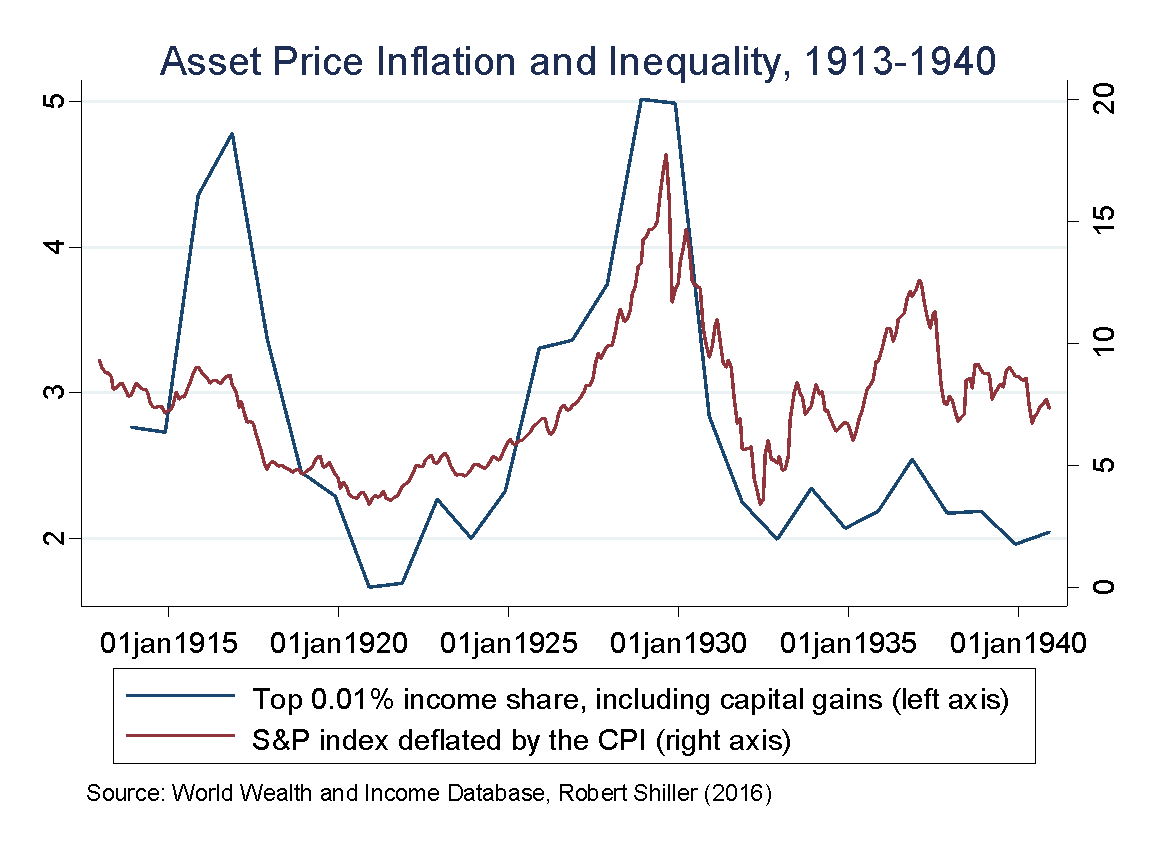 Money in The Great Gatsby is either inherited or derives from the mysteries of high finance or comes from crime or is made on the sports field. Involuntarily, Fitzgerald unfolds the Cantillon effect before our eyes. Indeed, the artificially stimulated financial sector, Fitzgerald shows, creates a distinctive geography and urban space. Whereas Manhattan and Long Island benefit from the redistributive effects of money production by the Fed and the Wall Street banks, the rest of America suffers from them. Thus, in the first chapter of the book, Nick Carraway explains that “Instead of being the warm center of the world, the Middle West now seemed like the ragged edge of the universe — so I decided to go East and learn the bond business.” Under central banking, money is first of all where it is artificially produced rather than in the hands of the most talented entrepreneurs. Nick followed the money.

The Great Gatsby describes a society that had gone beyond industrialism to become driven by leisure and consumption. But this too was at least partially caused by the Fed’s policies. As Dr. Guido Hülsmann writes in The Ethics of Money Production (p.187), “The spiritual dimension of these inflation-induced habits seems obvious. Money and financial questions come to play an exaggerated role in the life of man. Inflation makes society materialistic.”

No surprise then that the romance between Gatsby and Daisy is fashioned by materialistic concerns. Daisy’s love for Gatsby is conditioned by his great wealth. Daisy’s emotions are “materialistic”:

Suddenly, with a strained sound, Daisy bent her head into the shirts and began to cry stormily.

Consumerism is a function of monetary inflation because easy money policies create the illusion of wealth and thus lead individuals to consume more than they would otherwise. Because consumption increases, the capital stock will decline and society will ultimately be poorer than it would have been. This naturally leads us to depict the cultural consequences of easy money which are so visible in The Great Gatsby.

The Cultural Consequences of Inflation

The cultural effects of inflation have perhaps never been clearer than during the 1920s. As H.L. Mencken writes in 1925 in his review of The Great Gatsby, “To find a parallel for the grossness and debauchery that now reign in New York one must go back to the Constantinople of Basil I.” Mencken then adds with typical wit and gusto:

The thing that chiefly interests the basic Fitzgerald is still the florid show of modern American life — and especially the devil’s dance that goes on at the top. He is unconcerned about the sweatings and sufferings of the nether herd; what engrosses him is the high carnival of those who have too much money to spend, and too much time for the spending of it. Their idiotic pursuit of sensation, their almost incredible stupidity and triviality, their glittering swinishness — these are the things that go into his notebook.

By meddling with money, the Fed created an illusion of wealth and contributed to the creation of an all-pervasive world of illusion. It is Paul Cantor, that patron saint of Austrian literary criticism, who has noticed the link between inflation and the distortion of reality. Under fiat money, reality is confused with illusion and inauthenticity becomes a prevalent trait among the people. As Paul Cantor writes:

In a paper money economy, one does not see gold anymore, but the currency gives the illusion of the presence of wealth. The increasingly mediated character of the modern economy, especially the development of sophisticated financial instruments, allows the government to deceive its people about the nature of its monetary policy. When a government tries to clip coins or debase a metal currency, the results are readily apparent to most people. By contrast, the financial inter-mediation involved in modern central banking systems helps to shroud monetary conditions in mystery.

This inauthenticity of the characters in The Great Gatsby is obvious. From the beginning, everyone is speculating about Gatsby’s true identity. “Somebody told me they thought he killed a man once” says one; “it’s more that he was a German spy during the war” answers another. Gatsby himself lies about the fact that he was educated at Oxford. Worse, Daisy’s love for Gatsby is revealed to be phony as she finally realizes that her allegiance is with her husband Tom.

For the reader who knows his monetary history, nothing is clearer in The Great Gatsby than the cultural decline for which the artificial inflation of the money supply is responsible. Central banking, today as in the 1920s, led formerly good Americans to lie, commit fraud, and desert hard work. As Nick Carraway narrates the first night he goes to Gatsby’s mansion:

I was immediately struck by the number of young Englishmen dotted about, all well dressed, all looking a little hungry, and all talking in low, earnest voices to solid and prosperous Americans. I was sure that they were selling something: bonds or insurance or automobiles. They were at least agonizingly aware of the easy money in the vicinity and convinced that it was theirs for a few words in the right key.

In an inflationary environment, one must dream of becoming an overnight success because the slow steady way of amassing a fortune by working hard simply will not work. Hard-working people are systematically screwed. George Wilson, the garage owner and the figure of the hard-working American is, with Gatsby himself, the great loser of the novel. Not only is his wife Tom Buchanan’s mistress but she ends up dead. In The Great Gatsby, the Cantillon effect holds true even for love and women. Fitzgerald, however, somehow anticipated the bust that inevitably follows the boom. Gatsby dies. Nick returns to the Middle West.

One disappointing aspect of The Great Gatsby is the lack of contrast between the nouveaux riches who got wealthy thanks to fraud and financial speculation and the entrepreneurially talented bourgeoisie. This contrast, for instance, was made much clearer in Émile Zola’s book L’Argent. In Fitzgerald’s world, on the other hand, all the rich people are immoral and disgusting creatures. To this extent, Zola was much more successful, more than 30 years before Fitzgerald, in accounting for the corruption of entrepreneurial values and the debauchery caused by modern finance under fractional reserve banking and central banking.

One reason why Fitzgerald was incapable of elucidating different categories of rich was his insensitive ignorance of the financial sector itself. Contrary to Garet Garett’s novel The Driver (1922) which precisely describes the inner workings of the financial sector, Fitzgerald is sloppy and particularly unknowledgeable when it comes to describing the stock market. Thus, there probably is a germ of truth when Mencken writes that The Great Gatsby is “no more than a glorified anecdote, and not too probable at that.” Nonetheless, the moral decay on display in Fitzgerald’s novel serves, not merely as titillation for the reader, but as an object lesson in the evils of both central banking and prohibition.