GET NEWS AND ARTICLES IN YOUR INBOXPrint
A
A
Home | Wire | Flush with Cash: US Government Collects Record Taxes in 2015

Flush with Cash: US Government Collects Record Taxes in 2015

With April 15 come and gone, let's have a look at how well the Federal government has been doing for itself in recent years.

It turns out things have been going quite well. In 2015, Federal receipts (well over 90 percent of which comes from taxes) hit an all time high of 3.2 trillion in 2009 dollars. In real terms, that's the highest level ever reached.

Naturally, revenues dropped, when measured year over year, from 2008 to 2009 due to the recession at the time. However, revenue began to quickly grow again, and has now rebounded well above what it was at the end of the last cyclical peak. Receipts had peaked at 2.56 trillion (in 2009 dollars) in 2007. 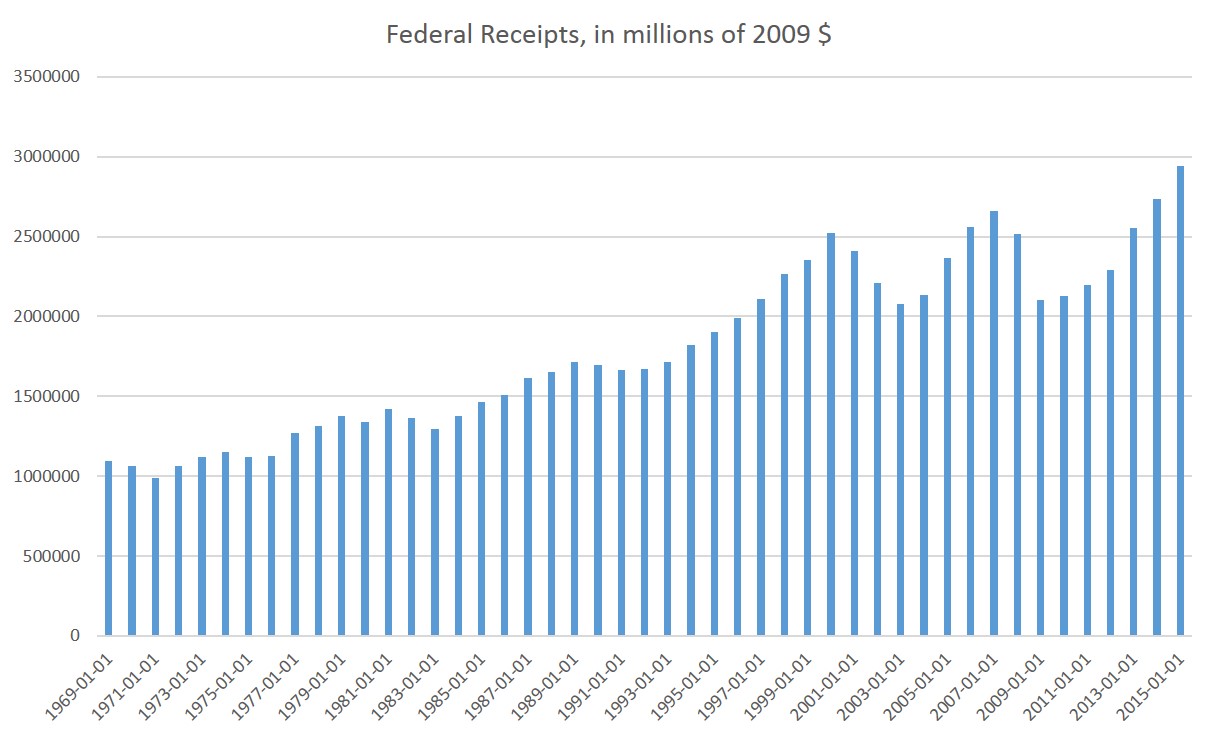 If we look at growth rates, we also find that tax receipts have been outpacing population growth in recent decades. Even if we accept that everything the government does is a good and essential thing, there's no reason for receipts to outpace population growth, especially for a government that is already as large, established, and immensely powerful as the US state. And yet, in 2015, the five-year growth rate in receipts was 41 percent, compared to 2.3 percent in population growth: 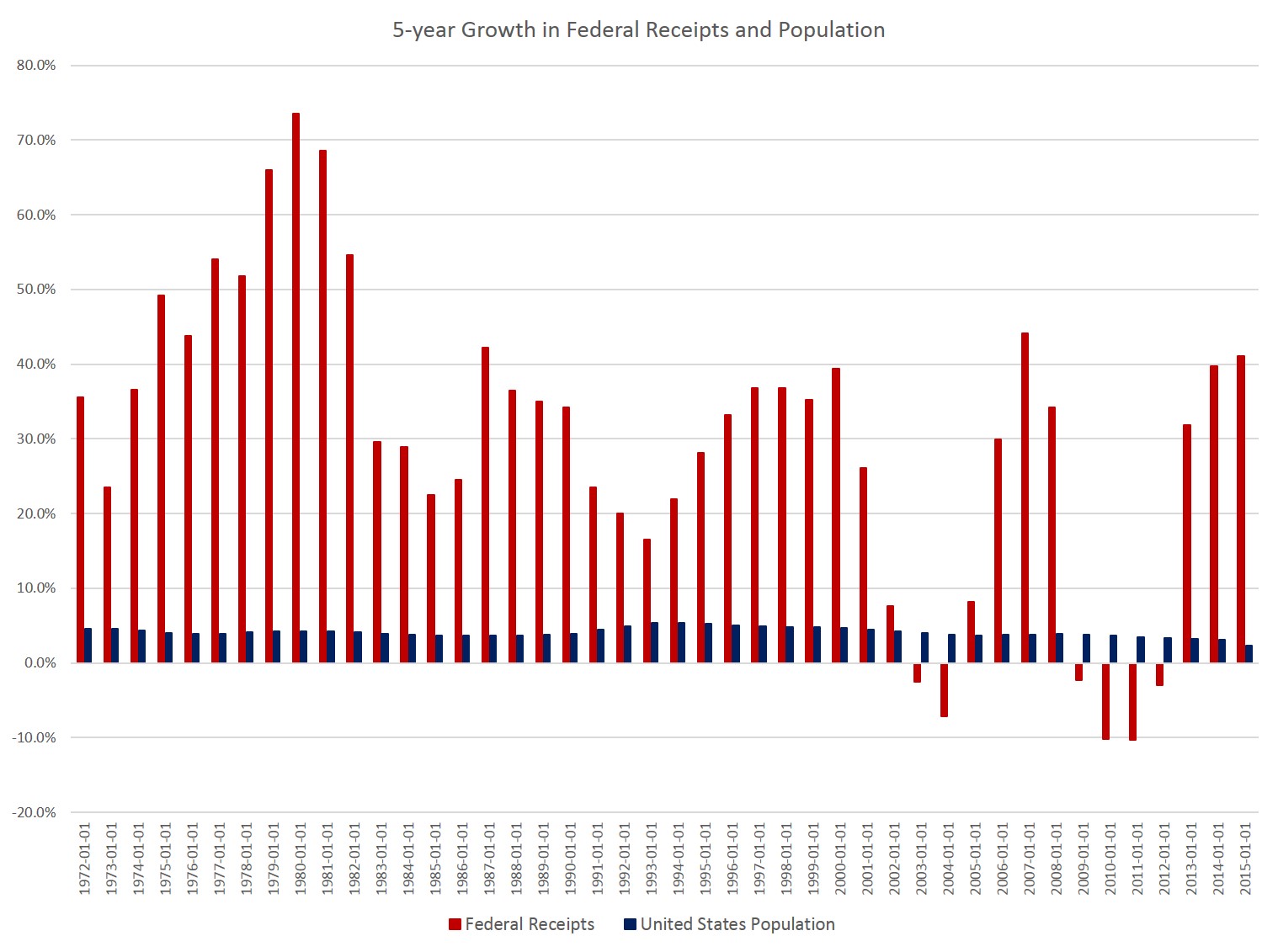 Growth rates declined in the aftermath of the recession, but revenue growth has been near 30-year highs since 2013.

One would think that, given all this growth, the US government might be covering its political liabilities. But, of course, that's not the case. The US government continues to spend far more than it collects in revenues. This has been financed partly by selling debt, which has been facilitated by open market manipulations on hte part of the central bank that enable the Treasury to continue to sell government debt at very low interest rates.

Federal spending has been above revenues since 2002: 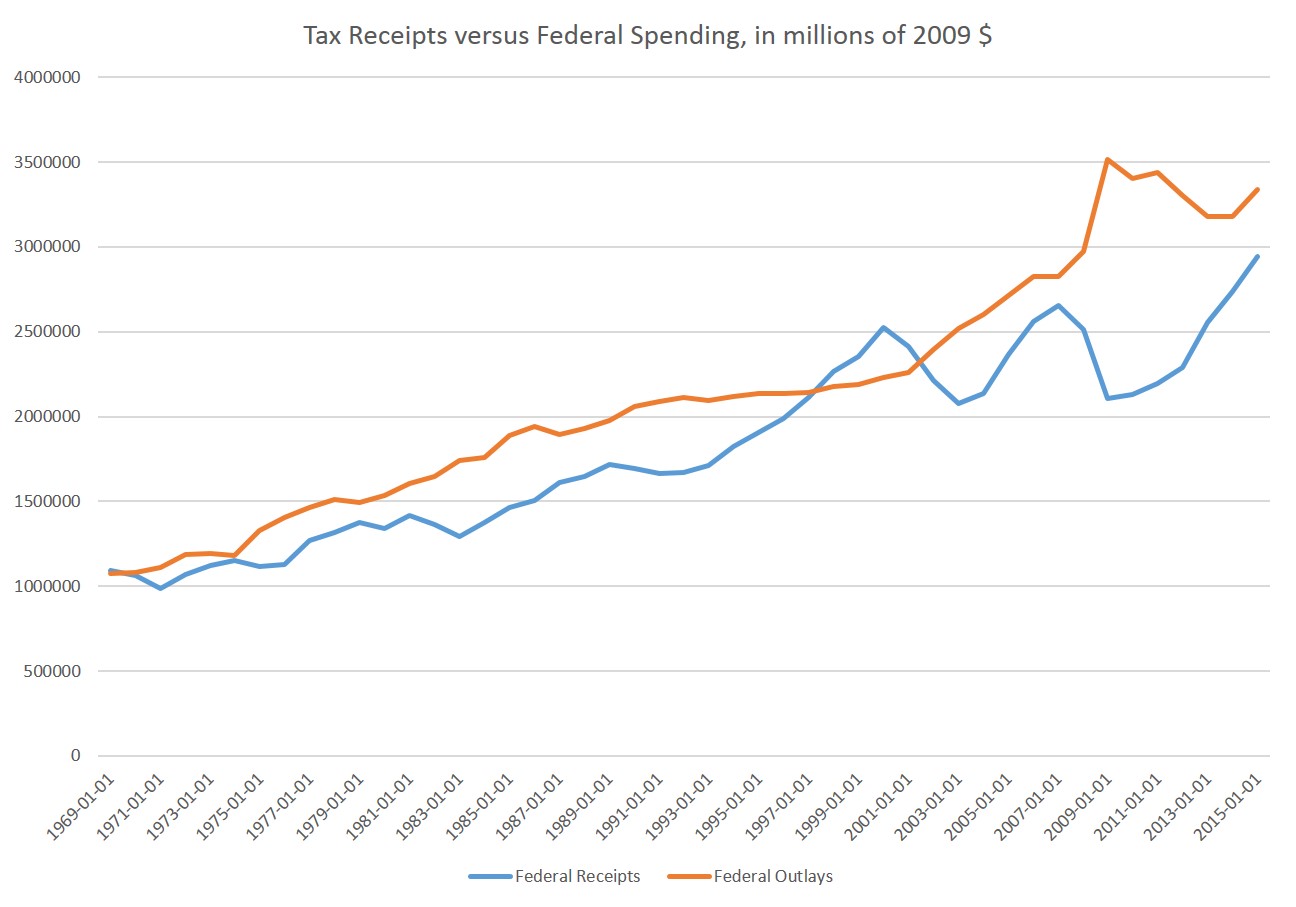 The gap between receipts and spending continues to drive sizable deficits every year. In 2009, the deficit peaked at more than 1.4 trillion dollars, but even in recent years, with apologists for federal spending crowing about how the deficit in shrinking, we're still looking at deficits around 400 billion dollars. 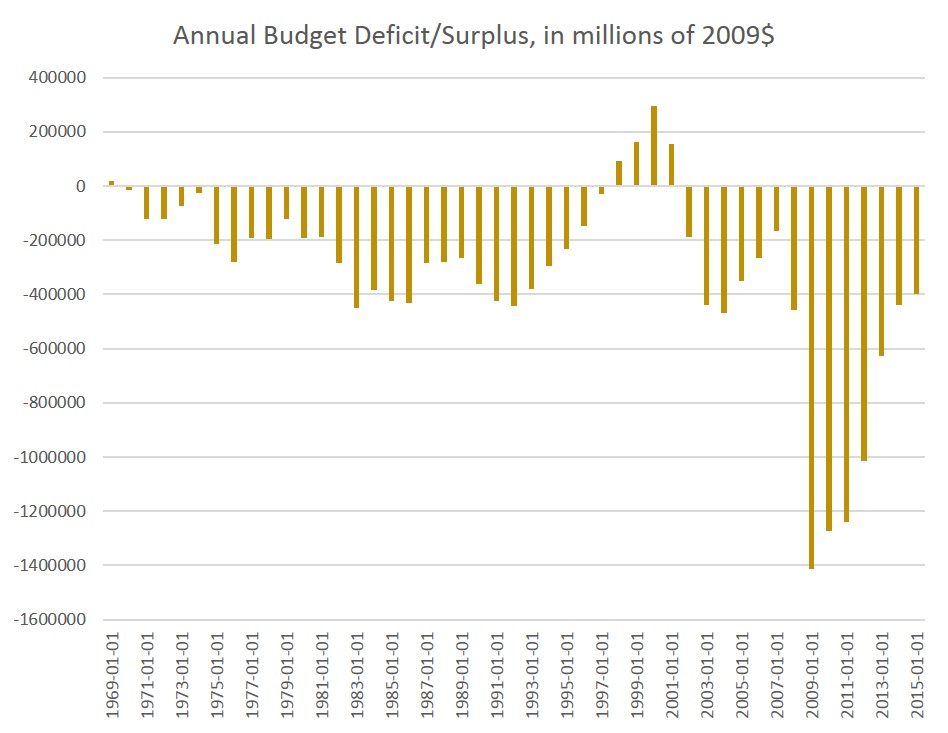 But how does all this tax revenue look when compared to the US economy overall? Are tax collections outpacing economic growth? Some observers of tax policy have pointed out that if compared to overall GDP, tax revenues have been around 20 percent for many years:

A better question to ask is whether the U.S. government is collecting more taxes as a percent of the total U.S. economy. In other words, is the government taking a bigger bite of the economy?

"It's not as catchy [to say]: 'tax receipts running at historical average,' but that's a more accurate description of where we're at right now," says Joe Rosenberg, a senior research associate at the Tax Policy Center.

A more practical way to look at this is to measure GDP while taking out the government component.

First, let's look at total GDP compared to government spending. For this next graph, I've subtracts total government spending (including state and local spending) from GDP to get a better sense of how much growth is actually taking place in the private-sector economy. This is a fairly crude way of removing the government component from GDP, but as long as we apply it in the same way every year, it gives us some useful comparisons.

If we look at federal receipts to overall GDP, it does indeed come in around 18 to 20 percent much of the time. However, if we compare receipts to the private economy, we find that receipts usually come in around 25 percent of the bigger picture. 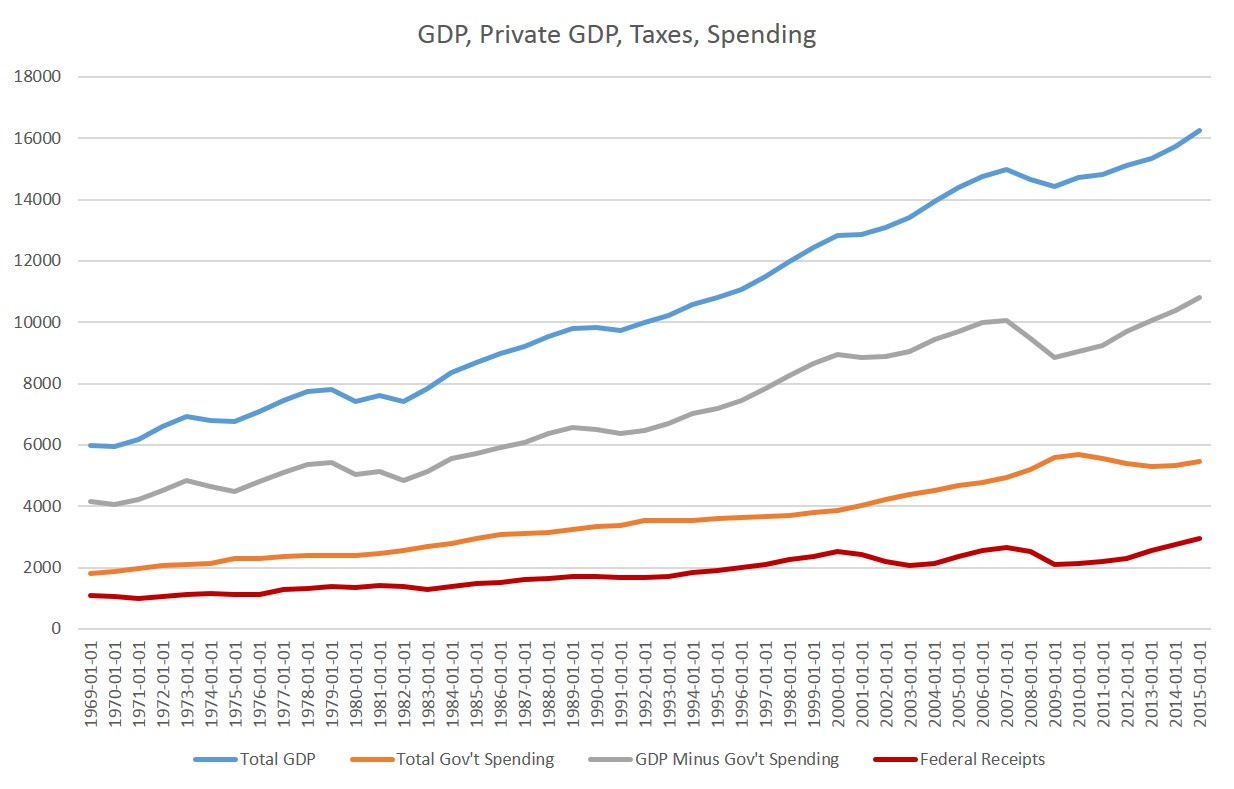 In other words, the federal government is doing quite well for itself while job growth and wages stagnate. 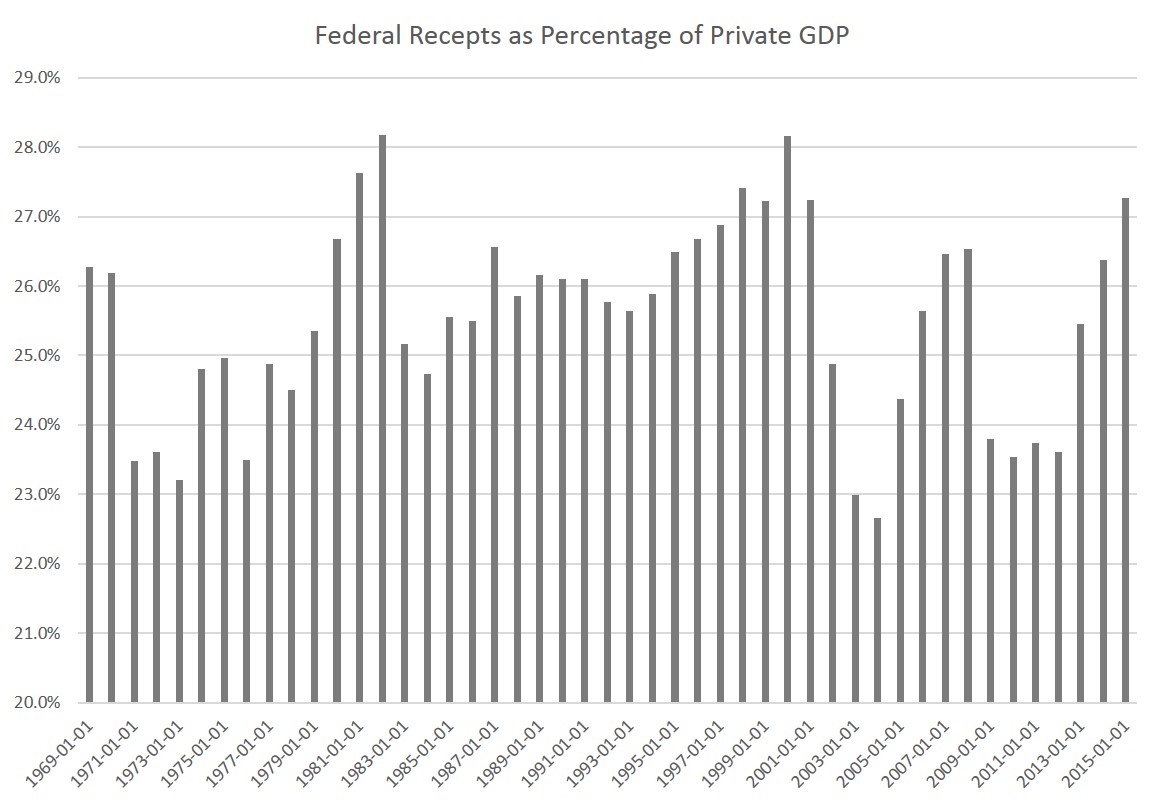 A Switch from Tax Revenue to Central-Bank-Created Revenue

However, those years of relatively low percentages from 2009 to 2012 are not indications that the federal government had backed off on tax collection, and allowed a larger role for the private economy. On the contrary, the fact that the revenue-to-private-GDP ratio was so low in those years shows that the federal government, and recipients of federal monies, were becoming less reliant on tax revenue, and more reliant on money creation via monetary policy. After 2009, government spending reached new highs, which propped up GDP. At the same time, tax revenue declined in importance as government spending increasingly relied on money creation through the central bank.

If tax revenues could not keep up with political demands for increased spending, then one can simply turn to other non-tax sources of revenue — assuming there's a central bank. That is, we can always turn to inflationary monetary policy.

Tax revenue is now on the rebound, but don't look for comparable decline in central bank involvement in facilitating more government spending.

Money Supply Growth in October Fell to a 39-Month Low. A Recession Is Now Almost Guaranteed.

Money supply growth slowed even more in October, and is now back to levels we last saw during the repo liquidity crunch of 2019, and in the days right before the 2007–09 recession.