Federal Spending Grew More Under Bush and Reagan than Under Obama

Now that 2016 is gone and President Obama is a thing of the past, we can take a look back at just how much government spending grew during his tenure. It seems that in his eight year tenure, Obama never managed to top the enormous increases in government spending that occurred under presidents Reagan and George Bush. In fact, Obama doesn't even come close.

When we examine the federal spending that occurred under Obama, we find that it increased 15.8 percent from the 3.3 trillion in spending of Bush's final year (i.e., 2008) to the 3.8 trillion of Obama's final year of 2016.

Using this same method, we find federal spending increased 33.3 percent from the end of Clinton's term to the end of Bush's term.

The first graph shows how much federal outlays increased during each president's term since Lyndon Johnson: 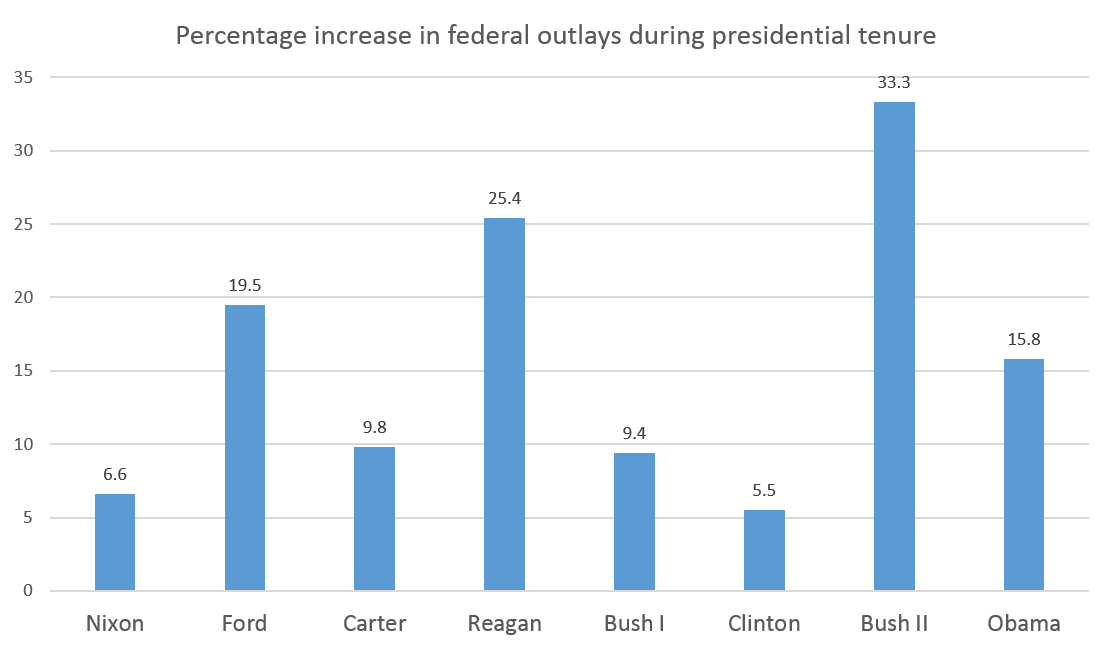 Lyndon Johnson is so far the biggest spender since the Second World War, and he grew the budget 40 percent over his one-and-a-half terms — a feat that is impressively bad. Johnson combined massive amounts of war spending and spending on social programs to greatly expand government programs and government spending.

Since Johnson, however, it's been Ford, Reagan, and Bush that are our biggest spenders, with Bush somewhat replicating Johnson's "Guns and Butter" agenda of combining massive amounts of military spending with greater social spending.

It was George W. Bush, after all, who pushed through the Medicare D program to expand government spending on health care, and it was Bush — who ran as "the education president" — who expanded federal spending on the Department of Education beyond what any other president has done. Meanwhile, Bush's war spending increased rapidly.

Moreover, most of that growth occurred when the GOP controlled both Congress and the White House, from 2001 to 2006. Over that six year period, federal spending increased 26 percent.

With Obama, however, federal spending largely went nowhere between 2009 and 2016. Much of the growth over the Obama terms can be attributed to the large jump in federal spending that occurred in the wake of the 2008 financial crisis. It should be noted, however, that our calculations here somewhat overstate Obama's spending and understate Bush's spending. That is, George W. Bush supported large amounts of federal "stimulus" — such as Bush's bailout of auto makers — which ended up in the 2009 budget. For the sake of simplicity, we'll attribute all of that stimulus spending to Obama since it shows up in the 2009 fiscal year — which began under Bush on October 1, 2008. Even when we do this, however, Obama's spending growth amounted to 15.8 percent, which places it fourth behind Reagan, Bush, and Ford.

The second graph shows federal outlays for each year with the final year of each president's term labeled. 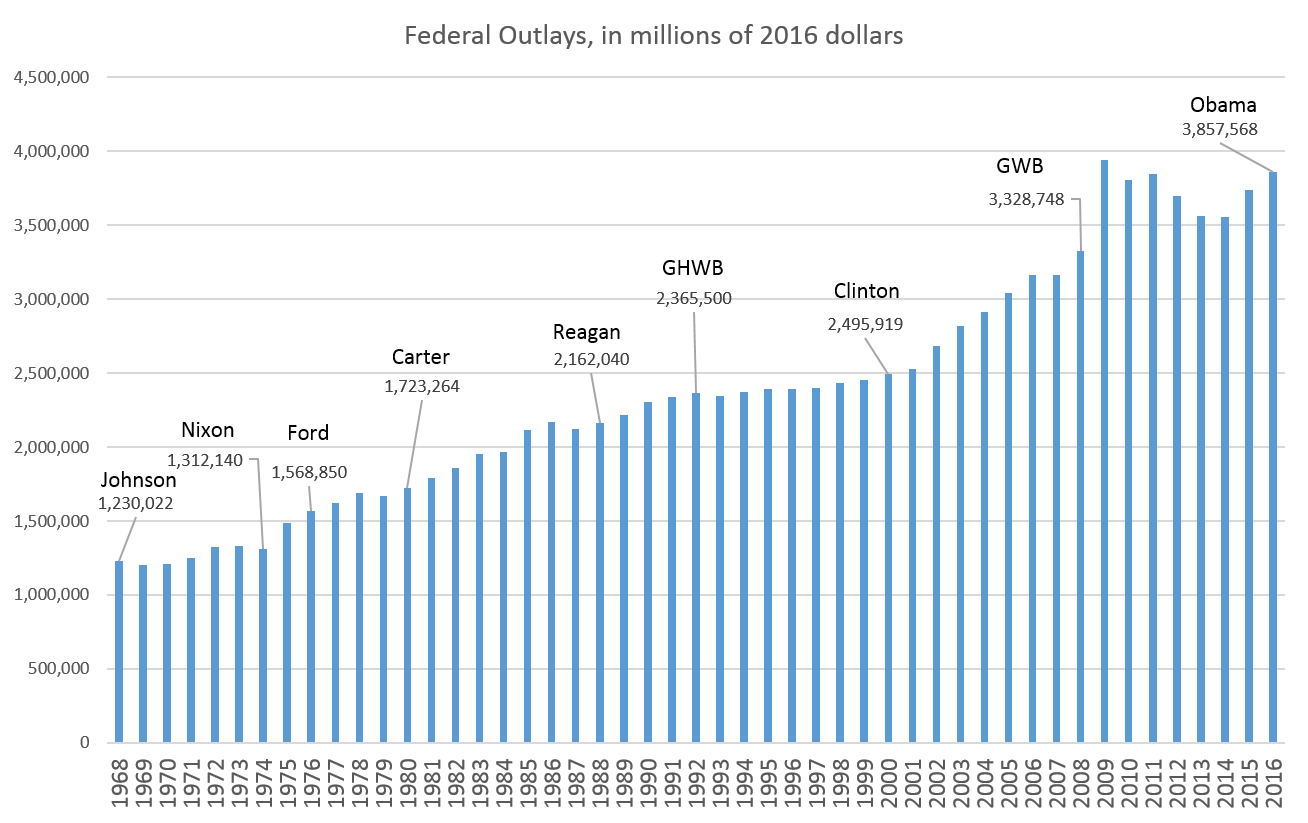 RELATED: "'Gridlock' in DC Does Little to Stymie Government Spending" by Ryan McMaken

And finally, we also see that the average year-over-year growth rate for Obama's term also comes in below both Bush and Regan, with Bush topping out the list at 3.6 percent. (Bush is well below Ford who in his short term increased spending by an average of nine percent each year.) Although Obama began his term with a huge 18 percent increase in 2009, the declines of the following years brought the average percent increase down to two percent. 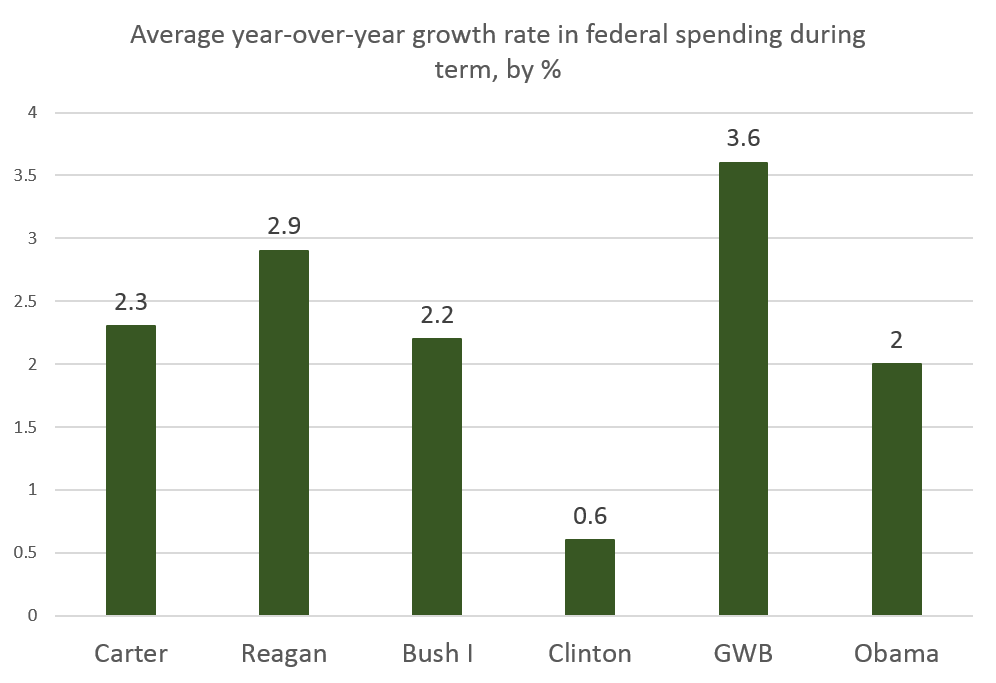 If these trends — especially those of the George W. Bush years — are any indication of the future, we should now brace ourselves for big increases in government spending under Trump.

After all, Trump has given no indication whatsoever of cutting federal spending. He did not run on a campaign of budget cutting, and he has only spoken of increasing government spending whether for a infrastructure projects or as lavish amounts of new spending on military programs.

Trump has now announced he is planning tax cuts, but this will only shift the burden of government spending onto future taxpayers and on to holders of US dollars through the inflation tax that results from deficit spending. And, as explained by Murray Rothbard, government spending itself is a burden on the taxpayers regardless of nominal tax levels.

Of course, government spending is not the only measure by which to judge a presidential administration or Congressional action. The burden of government regulation on businesses has increased immeasurably over Obama's two terms, leading to foregone employment opportunities, businesses that never opened, and purchases never made in the face of government regulations that destroy choices, opportunities and wealth. Moreover, government attacks on civil liberties through the drug war, should be considered, as should the disastrous foreign policies of these president's terms such as the wars of destruction that created today's refugee populations and invigorated Islamic radicalism.

If the Trump administration does manage to scale back government regulations, and makes it easier to open a business and earn a living, this may be the silver lining of the Trump years that many are hoping for. It is exceedingly unlikely we'll see any net cuts in government spending, and if Trump succeeds in raising effective taxes through tariffs and through more deficit spending, he may see very few silver linings indeed.

Poland's Beef with the EU Shows the Dangers of Political Centralization

The more the EU micromanages Polish internal affairs and punishes Poland for the simple act of exercising self-determination, more the benefits of leaving the bloc altogether will continue to increase.