The False Promises Behind Quantitative Easing

It has been almost eight years since former U.S. President George W. Bush warned the world that “without immediate action by Congress, America could slip into a financial panic and a distressing scenario would unfold.” The government’s response to the crisis was a $700 billion rescue package that would prevent U.S. banks from collapsing and encourage them to resume lending, which was soon to be followed by a series of Quantitative Easing (QE) packages injecting money into the economy. The rationale of government intervention was to boost spending, restore confidence in the market and revamp economic growth to everyone’s benefit — but did it succeed in doing so?

With QE still ongoing (albeit tapered), it is no longer part of a “rescue” package — it has now become the new normal — despite a complete lack of positive results. Since end-2007, the Federal Reserve’s balance sheet expanded from about $890 billion to more than $4.5 trillion! And yet, U.S. growth rates have remained in the vicinity of 2 percent since 2010 (see chart below). Europe is no different. The European Central Bank (ECB), which first embarked on QE in March 2015, raised the monthly amount for asset purchases from EUR60 billion to EUR80 billion, and expanded the range of assets to include corporate bonds — but despite that, the growth outlook remains dim with 1.4 percent in 2016, and 1.7 percent in 2017 (source: Bloomberg). So why are governments still clinging to an approach that simply doesn’t deliver? 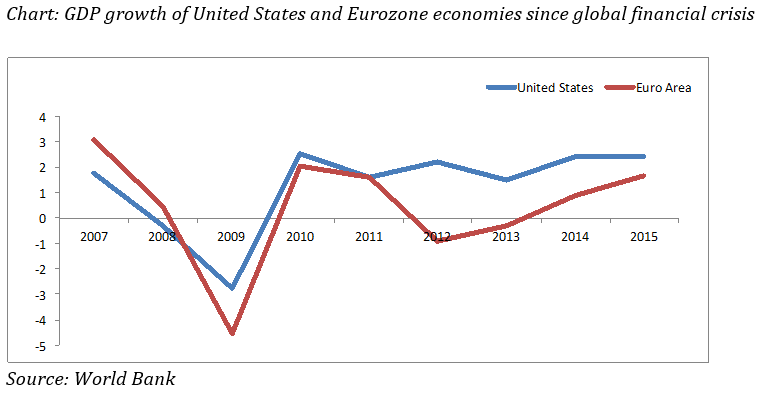 “All present-day governments are fanatically committed to an easy money policy, ” Ludwig von Mises observed in 1949 in Human Action, and to this day, little seems to have changed. Ever since governments, represented by their central banks, monopolized the production of money, and accordingly fractional reserve banking, our markets have never been free from government intervention. Monetary expansion happens all the time, not just in crises. In fact, the world has grown accustomed to this monetary policy, the new normal — and here is why:

“To increase liquidity”, they say, “unemployment is high” or “economic growth rates are lower than expected”, and “inflation is too low”. But as we see in the chart below, the economy hasn’t really improved now, has it? 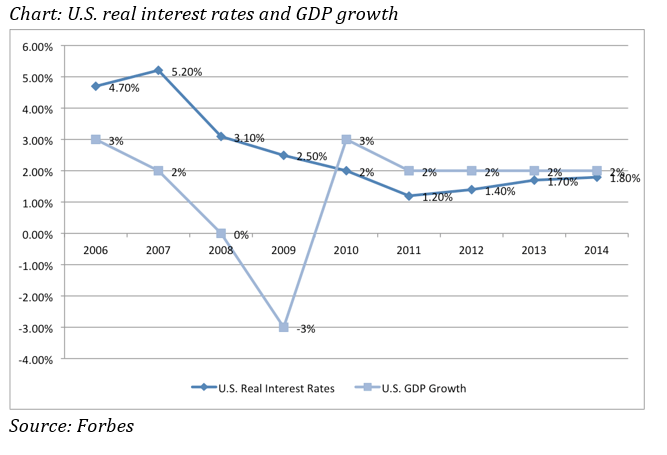 The False Promises of QE

Even though Keynesians and other opponents of free market economics say there is no such thing as a “trickle-down effect,” the very assumption underlying QE is that it will trickle down to revamp the economy by boosting spending. But with low growth rates, weak currencies, and zero-to-negative interest rates, one wonders: who stands to gain from this monetary policy direction?

Our economies have been dominated by the financial sector. Compared to the 1960s, the share of the financial sector has more than doubled from 4 percent to about 10 percent today, according to Forbes. This can be attributed to the closure of the gold window back in 1971, where the American administration looked for an easy way to finance its warfare-welfare state. The American citizen was deluded into thinking that the higher spending is because of the better performance of the economy, when in reality the government is printing its way out of the debt burden with an unbacked currency. However, inflation does not affect everyone equally.

There are those who are wealthy and well-connected to the banking system who benefit from inflation, because they are the first to receive the newly-created money. The lower you go down the socio-economic pyramid, the more adverse the effects, as money begins circulating and loses value. The fiat money system in a way protects a certain strata of society: the financial sector (and those connected to it) and central banks. Everyone else, is impoverished by the system, and what is worse, becomes dependent on it.

Also, you will find that those familiar with the system may know what to do to hedge against the risks of any deterioration in the economy and its currency. But others, like middle class professionals and the working class, they just don’t have access to the intricate higher levels of the financial markets. They are more likely to go to the bank to deposit their savings. But even then – the system hits them once again with negative interest rates.

On the surface, negative interest rates imposed by central banks aim to encourage lending and stimulate spending. But in reality, because banks are required to pay for keeping their reserves at the central depository, they will end up charging money for accounts, lower interest rates on savings, and possibly even deny opening accounts for lower income clients. These will ultimately discourage depositors with limited means of income from keeping money in banks altogether and thereby increase the number of the “unbanked”, which in the U.S. amounts to about 7 percent of households (about 25 million people). And what if banks do not actually pass on the negative rates on the deposit side? Then, the ironic outcome is that they will end up charging more on loans, by introducing higher fees even on credit cards, or interest rate floors on variable loans, as already seen in German banks (Bloomberg). The whole idea of imposing this policy to make loans easier and cheaper has completely boomeranged and created the opposite effect.

And so, what we are looking at is a flawed system that penalizes saving and encourages reckless spending and printing money. Although we all appear to be stuck in the same environment that combines negative interest rates and price inflation, we have the lower strata of society that is doomed to lose, as they end up spending more, discouraged by negative rates, and instead accumulate debt to keep up with the increasing prices. And then we have the “winners”, who know how to take advantage of the system and thrive in it. Doesn’t that look like entrapment to you? All this is “justified” by a government monopoly on money production. Conversely, are we to assume that a free market environment, free from government intervention, would ensure social equality? The fact is that, realistically, there is no such guarantee, nor was there such a utopian promise ever made. But as my friend Philip Bagus said in a recent interview:

We should distinguish between morally justified and unjustified inequality. When someone gets rich because he is productive and satisfies the wishes of people in a cheaper and better way than his competitors, we should applaud him. The resulting income inequality is justified. The problem starts if someone earns an income due to government intervention such as licenses, other regulations, or simply tax transfers. The resulting income inequality is unjustified. Getting richer at the expense of others through the use of the fiat monetary system, which represents a government monopoly and banking privileges, is unjust.

The Longer We Wait, the Worse the Hit

The truth is, that our government officials have not solved the problem. They merely prolonged the downfall and generally poisoned the investment environment. If they had really addressed the root causes, they would have left the bubble explode. Yes, it is a harsh experience to endure. Bush wanted to spare his citizens from a great deal of misery, but but the economy has not exactly flourished since then. In fact, our monetary policy direction has been prolonging the slowdown since 2008. The longer we wait, the worse the hit we will take. We are going from one bubble to another and are just postponing the inevitable. In a normally functioning business cycle we have a boom and bust. Yes, not everyone suffers equally from the bust: the working class is the most vulnerable to recessions. But under our current system, which has stripped them from their savings, they are exposed to greater risks than ever before.

Claudio Grass is a Mises Ambassador and an independent precious metals advisor based out of Switzerland. His Austrian approach helps his clients find tailor-made solutions to store their physical precious metals under Swiss law. ClaudioGrass.ch.

Why Interventionist Economists Love to Talk about Externalities

Claudio Grass is a Mises Ambassador and an independent precious metals advisor based out of...

Jeff Deist and Claudio Grass a fascinating development for Austrians and libertarians.

The “cure” to the current crisis that is forced upon all Europeans now is not just worse than the disease; it is the...