Europe Struggles as the ECB Pretends to Know What It's Doing

The European Central Bank (ECB) is rumored to be planning a halt  to its four-year quantitative easing program at the end of this week when it will stop its asset purchases while continuing to keep interest rates at current near-zero levels through 2019. The Economist laments this ‘rash’ decision, arguing that the European economy is still ‘faltering’, showing only very feeble and unstable signs of growth.

Since 2015, the ECB has bought bonds worth almost $3trn. However, core inflation has remained fairly low, exports have waxed and waned, and the Euro area has shown no clear signs of recovery after the 2008 financial collapse. Groping in the dark, The Economist blames “[p]oor weather, strikes and a bad flu season” for the shaky start of 2018, and low demand, both domestic and foreign, for the overall bleak outlook.

But in fact, the European economy is a very sick patient whose self-appointed doctor, the ECB, is treating it with the same poison that made it ill in the first place. It is also judging the health of its patient by monitoring the wrong signs, i.e. looking for some color in its cheeks rather than a strong heartbeat.

[…] the inevitable and ineluctable consequence of the expansion of credit… was bound to lead eventually to a collapse. And the thing which is chiefly advocated as a remedy is nothing but another expansion of credit, such as certainly might lead to a transitory boom, but would be bound to end in a correspondingly severer crisis.

Underlying the current sluggish performance of the European economies are the malinvestments prior to the 2008 collapse that were not allowed to be purged through the normal market process, and all the malinvestments brought about by the rounds of QE undertaken since then. Capital goods erroneously invested in more roundabout processes during the boom and after the bust remain locked in unproductive purposes. The suffocating regulations the EU is known for have only made it harder for entrepreneurs to salvage some losses from the crisis and embark on new and actually productive endeavors. As Mises (2009, 364) explained,

Economic goods which could have satisfied more important wants have been employed for the satisfaction of less important; only in so far as the mistake that has been made can be rectified by diversion into another channel can loss be prevented.

It’s nothing unexpected to see the Euro economies struggling to regain any strength. The blame lies with monetary policy. As much as The Economist tries to put a positive or even glamourous spin on central banking—by referring to it as an ‘agonizing’ task, requiring ‘soul-searching’ and ‘keeping the faith’—they only manage to underscore a rather embarrassing truth: central banking is just old-fashioned tomfoolery. Forecasts on which policy decisions are made are vague at best and epistemologically flawed, while the experts are groping in the dark with only a minimum knowledge of economic truths. Add politics to the mix—for no central bank is really independent—and you’ve got an institution that is both inept and dangerous.

As always, it is worth coming back to Mises’s poignant analysis (Mises 2009, 21-22) unfortunately ignored for almost a century now, and instead of awaiting recovery, rather prepare for a bust in the future:

Recurring economic crises are nothing but the consequence of attempts, despite all the teachings of experience and all the warnings of the economists, to stimulate economic activity by means of additional credit. […] And although the conclusion to which my investigations lead, that expansion of credit cannot form a substitute for capital, may well be a conclusion that some may find uncomfortable, yet I do not believe that any logical disproof of it can be brought forward.

For a more light-hearted take on the issue, you can spend a few minutes playing the ECB’s game, €conomia, which I believe approximates very well, in its simplicity, the actual work of a central bank. As you can see below, I made it to ‘central banker of the year’ on my first try, after choosing some values at random.

Ironically, they tell you you’ve ‘struck gold’. If only. 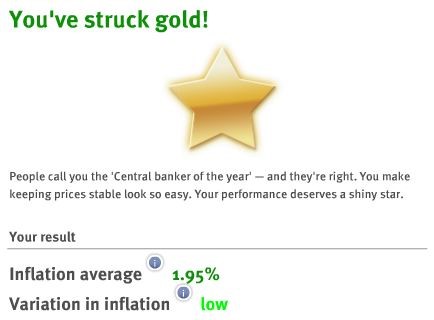 Murray Rothbard died more than a quarter century before the outbreak of the covid mania and tyranny, but if he were alive today, he wouldn’t be surprised to see that the most common resistance at an institutional level comes from churches.

How I Discovered Murray Rothbard

In Rothbard’s writings I did not find only something totally new to me, but I also found, explained in consistent and simple words, the reasons for the inefficiency and failure of most of the politics of my country, Italy.

Instead of succumbing to the zeitgeist, Rothbard moved it.

The assertion that “tax-financed public goods can make us all better off” is just that: an assertion. As Rothbard showed, there is no reason to just assume consumers would pay for these amenities were they not forced to through taxation.

David Howden is Chair of the Department of Business and Economics and professor of economics at St. Louis University...