GET NEWS AND ARTICLES IN YOUR INBOXPrint
A
A
Home | Wire | Deeper Forces Emerge: The Great War from January to June, 1917

Deeper Forces Emerge: The Great War from January to June, 1917

A hundred years ago, the First World War was reaching its crisis. Though we tend to think of the war in terms of stalemate and attrition, the war was a complex web of human activities and human choices that seemed anything but static to most of the millions of participants. An illustration of this idea, in the broadest sense, can be seen in trends and events during the first half of 1917, just one hundred years ago. Taken as as a whole, the first six months of 1917 represents a startling shift in the shape of the war. As the fine historian René Albrecht-Carrié put it, the deeper forces emerged. The huge battles of 1916 and the resulting alterations in the size and scope of the state in all belligerent societies combined with profound events in international affairs — above all, American entry — to create an entirely new dynamic of a war that is still not done with shaping the future. As evidence, we might contemplate briefly just some of the changing components.

Since 1914, the war had been fought on many fronts besides the vast Eastern and Western Fronts. To add to these, in August 1916, Romania's entry into the war opened a new war front involving forces from Germany, Austria-Hungary, Bulgaria, and Russia, as well Romania. As the commander of Germany's army, Paul von Hindenburg, sized things up just before Romania joined the war, "It is certain that so relatively small a state as Romania had never before been given a role so important, and, indeed, so decisive for the history of the world at so favorable a moment." Romania came in on the side of Entente shortly thereafter but faced disaster. Combined Austro-Hungarian, Bulgarian, and German forces handed the Romanian army defeat after defeat until the front stabilized in January 1917. But much of Romania was now in the hands of the Central Powers, and the Romanian army had lost a large part of its army, certainly the majority of the 300,000 military deaths (and an equal number of civilian deaths) the country would suffer before the end of the war. Still, Romania's contribution no doubt helped substantially in delaying Entente collapse on many other fronts. 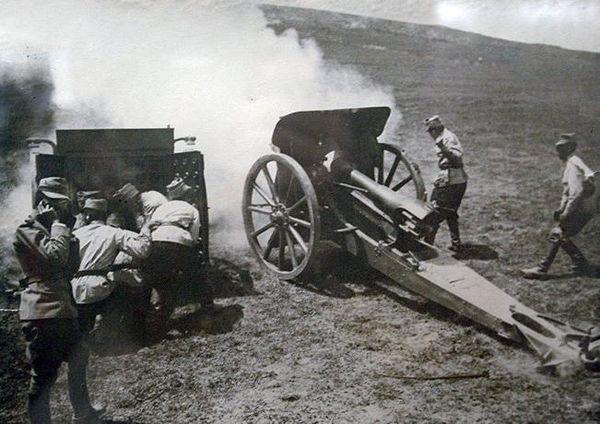 Romanian 105mm howitzers at the Battle of Mărăști, 1917

In Russia, the strains of the vast 1916 Brusilov Offensive had depleted Russian, Austro-Hungarian, and other armies in numbers that prefigured the Eastern Front battles of the Second World War. The 1916 Russian offensive was counted as a victory, but it was a Phyrric one. The half a million Russian casualties it cost brought the Russian wartime total to almost six million killed, wounded, or missing soldiers by early 1917. Russian industry still produced shells, but the economy was increasingly a shambles. Corruption was rife. The famous and sordid dynamic of Nicholas, Alexandra, and Rasputin had weakened the war effort both in perception and in reality. The murder of Rasputin on December 30, 1917, did little to reverse this weakening. The relationship between the parliament (the Duma) and the High Command (headed by the Tsar) worsened. Famine threatened in many areas. Mutinies and desertions were increasing drastically by early 1917. It was in this context and at this moment that crowds poured into the streets of Petrograd, starting a chain of events which ended with the February Revolution and the abdication of the Tsar in March. The new Provisional Government pledged itself to continue the war effort, but observers in all countries had doubts — especially since the Russian Caucasus army facing the Turks had disintegrated the moment the news of the February Revolution reached it. On the other hand, strategists of the Central Powers began to revive their early visions of a victory in Russia followed by a concentration of forces in the West. To many German leaders it now seemed possible to achieve a delayed and attenuated version of the failed Schlieffen Plan at long last. 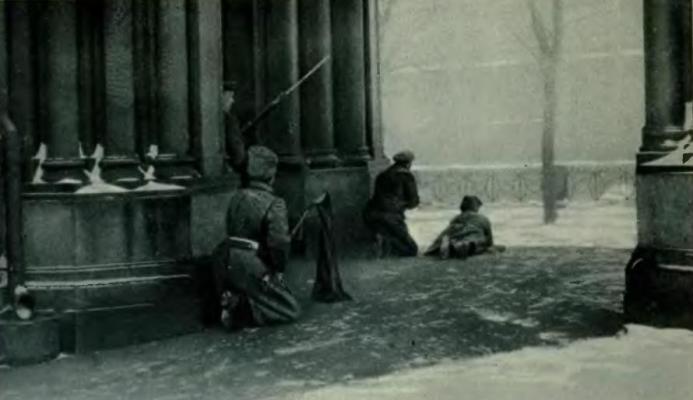 It was on the heels of these events that the United States declared war on Germany on April 6, 1917. Of course, the United States had been neutral in the official sense before April 6. But in fact, American loans, goods, and shipping had been a major component of Allied war-making since 1915. Equally important, the United States as a "neutral" had impacted the shape of German naval policy and the maintenance of the British Blockade of Germany by means of Woodrow Wilson's pressure on the Germans to curtail their policy of unrestricted submarine warfare.

From April to June 1918, the exact nature of the American contribution was yet to be worked out, but it was immediately evident that without the hindrances of official neutrality, the efforts the Americans would be crucial, if they materialized in time.

And even the promise of American intervention came none too soon for the Entente powers. The French launched the murderous "Nivelle Offensive" in the center of the Western Front three days after American entry. Nivelle had managed to sell to Allied leaders an updated theory of offensive-mindedness with the promise of a total victory against the Germans in France within a few days. The method — throwing away Henri Petain's proven system, "artillery conquers, infantry holds" — was, simply, one furious attack after another. The result was the "French Mutinies." Beginning in early May, frontline soldiers in many, perhaps half, of French divisions simply refused to go over the top in these suicidal attacks. Desertions grew, but for the most part, French poilus disobeyed orders and held their positions instead of charging across No Man's Land to attack impregnable German positions. Self-preservation by means of "informal truces" had meant survival throughout the war for many soldiers in all armies, but this widespread mutiny represented something far more serious. Further, in Italy, a Nivelle-like offensive on the Isonzo Front produced a similar plunge in morale, with desertions and mutinies beginning in June 1917. Likewise, the failure of the Russian Kerensky Offensive of June 1917 reignited the wave of mutinies in the Russian army, rendering it incapable of further offensive operations. As for Britain, a sizeable mutiny at the brutal British training base at Etaples would break out in September 1917, with much less effect on the front itself. Still, Allied leaders were faced with the irony of an enormous diplomatic victory in the form of American entry--but potential Entente military collapse before the United States could mobilize. 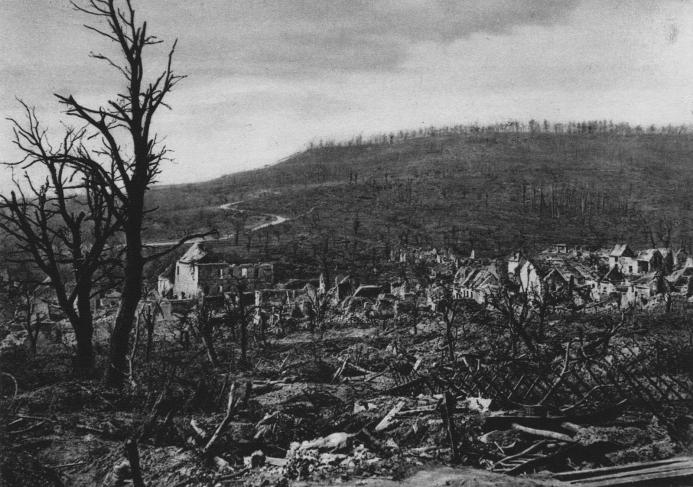 The ruined village of Soupir, one of many such in the wake of  the Nivelle Offensive

It is true that the Entente had some important successes during the first half of 1917, almost all of them by British and Empire units. The Arras Campaign (in particular the Canadian assault on Vimy Ridge and the Messines battle in the Ypres sector) made gains that were large by Western Front standards. But these victories were local, and in their primary mission (to divert Germans from the larger Nivelle offensive) unsuccessful. They never came close to any breakthrough, and the Germans would recapture much of the gained territory in 1918. 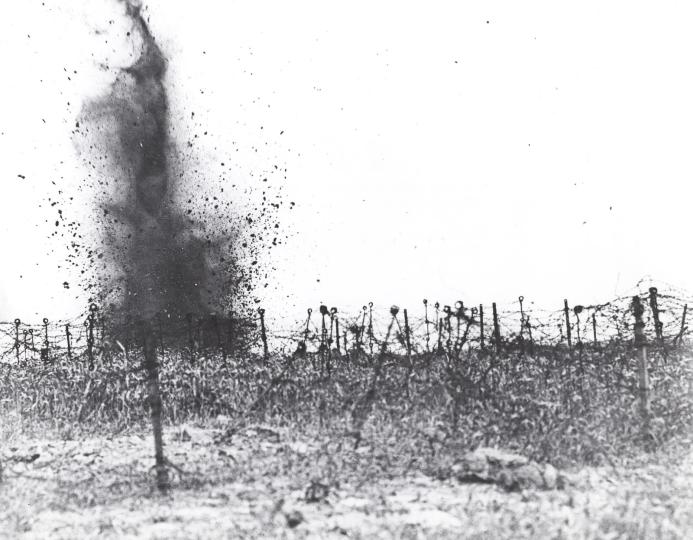 Artillery preparation for the Canadian attack at Vimy Ridge

Finally, the specter of a collapse of Entente fighting morale in 1917 took shape as all the home fronts (Entente and Central Powers alike) developed fissures, above all in the vital area of war production. The sheer pressure of manpower shortages in the face of accelerating munitions needs had led to increasing hours, dangerous working conditions, food shortages, and government repression of many kinds in the munitions factories of all the countries involved. Strikes had occurred in the workforces of all belligerent societies since 1915, but now strikes skyrocketed everywhere in extent, intensity, and violence. Again, these social fractures affected all belligerents, but since the Entente governments were simultaneously facing exhaustion and mutiny on so many fronts, the situation was indeed dire.

Under these conditions the entry and war mobilization of the United States, the fourth most populous country on the globe and the world's strongest economy, could hardly be anything but pivotal after June 1917.

"Public health crisis" is essentially a left-wing stock phrase at this point, as is reflected by the fact that the solutions proffered to the social ills in question are virtually always some sort of government regulation or income redistribution scheme.

How the Left Exploits Antiracism to Attack Capitalism

The forces of anticapitalism have long latched on to whatever best suits them for pushing their agenda. Whatever the latest injustice may be—from a polluted environment to poverty to racism—the solution is always the end of capitalism.

Why the EU Continues to Fight Brexit

EU membership is a sort of bait-and-switch for states that were sold on membership as an opportunity to join a free trade bloc and a chance to participate in a more cooperative Europe.

Without a monopolist central bank, market forces would restrain the issuance of bank notes. But once central banks monopolize money creation, wealth is systematically transferred to the central bank and the privileged few who are favored by the state.