Bernie Sanders Is Right: The US Is Already a "Socialist" Country | Mises Wire
Skip to main content

GET NEWS AND ARTICLES IN YOUR INBOXPrint
A
A
Home | Wire | Bernie Sanders Is Right: The US Is Already a "Socialist" Country

Bernie Sanders Is Right: The US Is Already a "Socialist" Country

Last month, Bernie Sanders pointed out that once upon a time, government programs such as Social Security were regarded as "socialism." Specifically, speaking about the New Deal and Franklin Roosevelt, Sanders said:

And, by the way, almost everything [FDR] proposed was called “socialist.” Social Security, which transformed life for the elderly in this country was “socialist.” The concept of the “minimum wage” was seen as a radical intrusion into the marketplace and was described as “socialist.” Unemployment insurance, abolishing child labor, the 40-hour work week, collective bargaining, strong banking regulations, deposit insurance, and job programs that put millions of people to work were all described, in one way or another, as “socialist.” Yet, these programs have become the fabric of our nation and the foundation of the middle class.

Sanders is wrong about the New Deal "putting people to work" since their government-funded activity did nothing to create wealth or end the depression. The Depression lasted until 1945. And the New Deal certainly isn't "the foundation of the middle class" which grew and thrived in the second half of the 19th century.

However, when he classifies the New Deal programs that dominate US policy today as "socialist," Sanders may have a point. While socialism, properly understood, is defined by government ownership of the means of production, the term "socialism," is also frequently thrown around to apply to a wide variety of mostly-market economies that also have a sizable amount of government spending on social programs.

For this reason, advocates for more state spending often refer to other Western welfare states as "socialist" countries, even though they are, like the United States, non-socialist economies with large social-benefits programs. In this context, it's important to keep in mind that the US is today not fundamentally different from these welfare states. The US spends a similar amount of its GDP on social benefits programs as other welfare states, including Australia, Switzerland, and even Norway.

While some observers may today insist this sort of thing is "socialism," FDR was careful to not call his social-benefits programs socialist, since Americans were sure to oppose anything called "socialism."

Redefining the word "socialist" has a long history, though. Marxist, socialism, of course, required that all the "means of production" by owned by "the people" and be completely out of private hands. What that looks like, in practice, no one knows. Nevertheless, by the mid-19th century, it was already becoming clear that the predictions of Marxism were wrong, and that his system of totally destroying private ownership of capital was likely to never come to pass. After all, contrary to Marx, the ownership of capital was not becoming more concentrated. It was becoming more diffuse. The working classes were not descending into a wretched proletariat in western Europe. They were experiencing gains in their standard of living.

More astute socialists saw this and departed from Marx, forming the backbone of what they decided should be known as western-style "democratic socialism." Chief among these theorists was Eduard Bernstein. For Bernstein, socialism was not about revolution. It was about using democratic institutions to regulate the capitalists in a way that Bernstein though benefited the workers. These included things like government pensions, minimum wages, state regulation of labor hours, and more. This was a huge departure from the socialist ideal of public ownership of the means of production. The new plan barely touched the basic foundations of the market economy. It only brought about a number of programs that used social-benefits programs to redistribute some wealth.

This type of "socialism" thus became popular is western Europe and gained the support of many elites in Britain, for example, who made up the Fabian Socialists. This was precisely because this allegedly socialist program was really just mostly a market system with some welfare programs thrown in. It allowed the West to continue to get rich while redistributing wealth to a limited extent.

As we saw from the Soviet and Chinese experiments, of course, more robust systems of socialism led to mass starvation and economic stagnation.

This new type of non-socialism has proven to be very popular politically.

For example, government old-age pensions in the US enjoy support that is as near to "universal" as anything is likely to get:

when Pew surveyed Americans as to which government programs should be cut, lopsided majorities opposed any cuts to Medicare or Social Security. When asked what programs should be cut as part of budget negotiations in DC, 87 percent of respondents opposed cuts to Social Security, while 82 percent opposed cuts to Medicare. (The popularity of these programs extends across Republicans, Democrats, and unaffiliated voters.)

This creates a situation in which many Americans take advantage of these government programs while simultaneously denouncing other Western welfare states as "socialist."  But in reality, support for Social Security is nothing more than support for taking the property of current wage earners and redistributing it to pensioners. This has always been the case, and it explains why pensioners in the early decades of the Social Security programs often received far more in benefits than they ever paid in Social Security taxes. This doesn't make these programs socialist in any true sense, but it does mean the US is hardly different from other countries that offer similar pension programs.

In spite of this, the current "anti-socialist" supporters of Social Security, continue to kid themselves. Many supporters claim they are "paying in" to a trust fund that's only giving them back when they "invested." This was never true. The same is true of supporters of Medicare, where claims of paying in are all the more absurd since Medicare recipients nowadays are likely to receive much more in benefits than they "paid in."

Large majorities of Americans also like poverty relief programs like Medicaid and housing assistance, so its not surprising that a large portion of the federal budget goes to these programs: 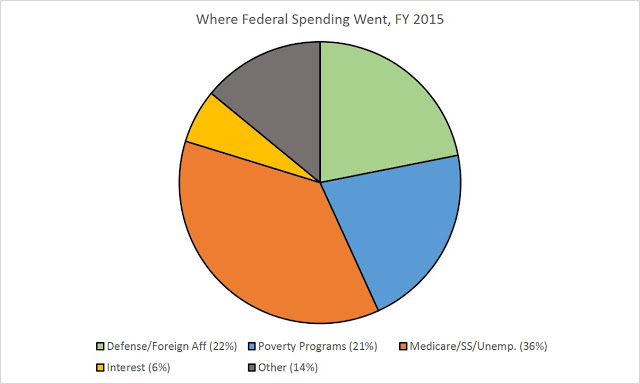 What was most different about the New Deal — other than its scale — was how it took a largely unregulated economic system and imposed a massive amount of new regulation on property owners in the form of laws related to wages, labor, prices, and more. Arguably, this sort of regulation is far more damaging than mere cash transfers since it directly impedes the creation of wealth before it can even be redistributed. This started the US down the road to being more or less like every other Western welfare state.

And of course, there is also no lack of support for deposit insurance, banking regulations, "anti-trust" regulations and an endless list of other regs.

So, it's hard to not scoff and smirk when one reads in The New York Times that "Even Clinton Supporters Warm to Socialism." If by "socialism" one really means support for typical Western-style welfare state — well, we already have it.  We're already there. It's also a safe bet that, given the polling data on old-age benefits, that a sizable portion of GOP voters have long ago "warmed to socialism" as well.

The US Is More Socialist than Many Countries

And if we're measuring socialism by the sheer volume of wealth that is redistributed, the United States ranks second in the wealthy West. As I noted in "'Social Expenditures' In the US Are Higher Than All Other OECD Countries, Except France," when we look at the sheer volume of wealth redistribution that results from cash transfers, regulations, and manipulation of the tax code, government expenditures on social programs are enormous in the United States.

The fact of the matter is that government spending on old-age benefits and health care is so immense in the US (health care spending in the US is 4th highest in the world), that by no measure could the United States be deemed "not socialist" if we're going to turn around the next minute and call Canada or even Norway "socialist." Unless, of course, one takes the position that Norway's 20-percent level of social spending is "socialist," but the US's 18-percent level is "free market."

At the same time, if the US is already approaching Norway in terms of cash transfers for social spending, it's hard to see why we need all those big tax increases Bernie wants.

From Diseases to Recessions, Government Failure Is Endemic

As with economic policy to "cure" recessions, the authorities’ health response is good at crippling markets, but never delivers what is promised.