In the next issue of The Austrian, David Gordon reviews Sebatian Mallaby's new book, The Man Who Knew, about the career of Alan Greenspan. Mallaby points out that prior to his career at the Fed, Greenspan exhibited a keen understanding of the gold standard and how free markets work. In spite of this contradiction, Mallaby takes a rather benign view toward Greenspan.

However, in his review, Gordon asks the obvious question: If Greenspan knew all this so well, isn't it all the more worthy of condemnation that Greenspan then abandoned these ideas so readily to advance his career?

Perhaps not surprisingly, now that his career at the Fed has ended, Old Greenspan — the one who defends free markets — has now returned.

This reversion to his former self has been going on for several years, and Greenspan reiterates this fact yet again in a recent interview with Gold Investor magazine. Greenspan is now a fount of sound historical information about the historical gold standard:

I view gold as the primary global currency. It is the only currency, along with silver, that does not require a counterparty signature. Gold, however, has always been far more valuable per ounce than silver. No one refuses gold as payment to discharge an obligation. Credit instruments and fiat currency depend on the credit worthiness of a counterparty. Gold, along with silver, is one of the only currencies that has an intrinsic value. It has always been that way. No one questions its value, and it has always been a valuable commodity, first coined in Asia Minor in 600 BC.

The gold standard was operating at its peak in the late 19th and early 20th centuries, a period of extraordinary global prosperity, characterised by firming productivity growth and very little inflation.

But today, there is a widespread view that the 19th century gold standard didn’t work. I think that’s like wearing the wrong size shoes and saying the shoes are uncomfortable! It wasn’t the gold standard that failed; it was politics. World War I disabled the fixed exchange rate parities and no country wanted to be exposed to the humiliation of having a lesser exchange rate against the US dollar than itenjoyed in 1913.

Britain, for example, chose to return to the gold standard in 1925 at the same exchange rate it had in 1913 relative to the US dollar (US$4.86 per pound sterling). That was a monumental error by Winston Churchill, then Chancellor of the Exchequer. It induced a severe deflation for Britain in the late 1920s, and the Bank of England had to default in 1931. It wasn’t the gold standard that wasn’t functioning; it was these pre-war parities that didn’t work. All wanted to return to pre-war exchange rate parities, which, given the different degree of war and economic destruction from country to country, rendered this desire, in general, wholly unrealistic.

Paul Volcker was brought in as chairman of the Federal Reserve, and he raised the Federal Fund rate to 20% to stem the erosion [of the dollar's value during the inflationary 1970s]. It was a very destabilising period and by far the most effective monetary policy in the history of the Federal Reserve. I hope that we don’t have to repeat that exercise to stabilise the system. But it remains an open question.

Ultimately, though, Greenspan claims that central-bank policy can be employed to largely imitate a gold standard:

When I was Chair of the Federal Reserve I used to testify before US Congressman Ron Paul, who was a very strong advocate of gold. We had some interesting discussions. I told him that US monetary policy tried to follow signals that a gold standard would have created. That is sound monetary policy even with a fiat currency. In that regard, I told him that even if we had gone back to the gold standard, policy would not have changed all that much.

This is a rather strange claim, however. It is impossible to know what signals a gold standard "would have" created in the absence of the current system of fiat currencies. It is, of course, impossible to recreate the global economy under a gold standard in an economy and guess how the system might be imitated in real life. This final explanation appears to be more the sort of thing that Greenspan tells himself so he can reconcile his behavior at the fed with what he knows about gold and markets.

Nor does this really address Ron Paul's Concerns expressed for years toward Greenspan and his successors. Even if monetary policymakers were attempting to somehow replicate a gold-standard environment, Paul's criticism was always that the outcome of the current monetary regime can be shown to be dangerous for a variety of reasons. Among these problems are enormous debt loads and stagnating real incomes due to inflation. Moreover, thanks to Cantillon effects, monetarily-induced inflation has the worst impact on lower-income households.

Even Greenspan admits this is the case with debt: "We would never have reached this position of extreme indebtedness were we on the gold standard, because the gold standard is a way of ensuring that fiscal policy never gets out of line."

Certainly, debt loads have taken off since Nixon closed the gold window in 1971, breaking the last link with gold: 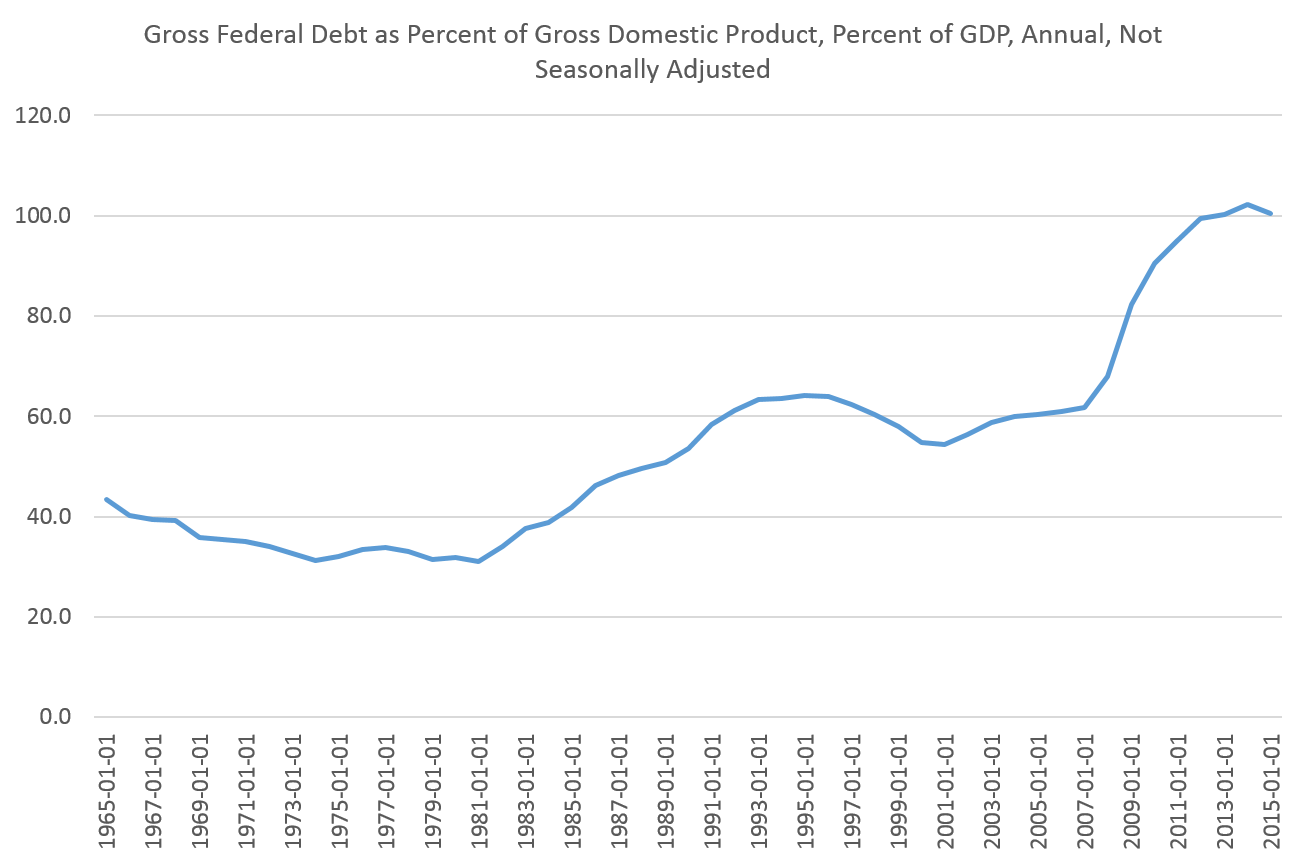