Yesterday, the Census Bureau released its measure of homeownership for 2016, and the annual average for 2016 was 63.4 percent. That's the lowest rate measured since 1965 when the homeownership rate was 63 percent. 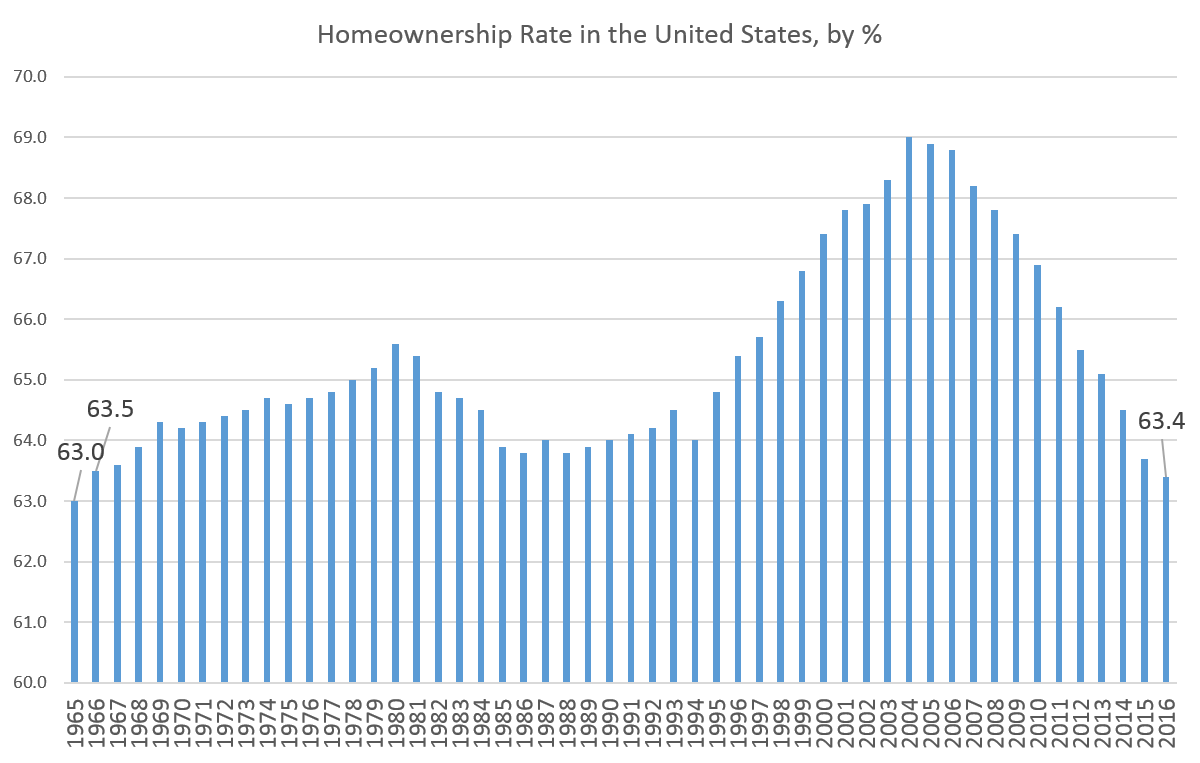 FHA is a government program designed to "stimulate" more spending on home purchases by subsidizing lenders, thus allowing for lower down payments and riskier loans to less credit-worthy buyers.

As with any subsidy program, the end result is increased home-price inflation, and greater demand. Ultimately, the FHA's easy money has not been enough to keep the homeownership rate from plummeting.

The FHA is just one of many programs designed to prop up homeownership totals. There are, of course, the GSEs such as Fannie Mae and Freddie Mac designed to increase liquidity in the secondary market, thus making home loans more plentiful. And then there is simply the ongoing monetary stimulus activities of the Federal Reserve which has employed monetary policy to keep interest rates low, supposedly in order to help consumers purchase more homes.

The Fed claims that a beneficial side effect of its stimulus programs has been to make homes more affordable. But, those very same policies — such as Fed purchases of over a trillion dollars in mortgage-backed securities — acts to increase home prices and make them less affordable. This is done to assist big banks with large amounts of residential real estate in their portfolios, and because existing homeowners like to see the price of their homes go up.

But, you can't have it both ways. Efforts to keep existing homeowners and banks happy by propping up prices only makes housing less affordable for people who don't already own a home.

Politically, though, these policies have their advantages. Federal policy is to increase home prices on the one hand, while claiming to make housing more affordable on the other hand. Federal programs are necessary, you see, because "the market" makes housing too expensive. Just be sure and not notice the many ways government policy inflates home prices.

Naturally, if the Federal government wasn't so committed to propping up and increasing home prices in the first place, fewer households would be in need of federal programs to bring down down payments and interest rates.

There are times when these interventionist policies can appear to work, though. During much of the 1990s, — and from 2001 to 2007 — it is likely that real incomes increased. So, even in the face of rapidly increasing home prices, homeownership rates were increasing.

Since 2007, though, there is good reason to believe that real incomes have been, at best, stagnant. Home prices continue to go up, but income growth isn't enough to keep pace with this asset-price inflation.

The result has been years of declining homeownership. Contrary to what we're told by the real estate industry and policymakers, the answer isn't to double down on easy money and more federal programs. The answer is to simply refrain from ongoing intervention, to allow home prices to fall to increase affordability. Simultaneously, interest rates must be allowed to rise so people who save money are actually rewarded for saving rather than spending every last time on more real estate and consumer products.

This policy would also have the added benefit of mitigating the effects of another housing crisis similar to what we saw from 2007 to 2012. Fewer home loans would be made for large houses with all the amenities. Buyers would lean more toward smaller, more affordable houses they can afford without maximizing their debt loads. Builders would be forced to stop building immense amenity-laden new homes that are only made possible by federal subsidy programs. Those who do buy will be less likely to end up upside down, less likely to walk away from their debt, and less likely to default in the first place.

The covid-19 lockdowns have unexpectedly brought into clear view the fact governors wield immense power over the daily lives of Americans. Some state legislatures have moved to limit this power. Better late than never.

I would be silly to suggest that I know the precise potential of cryptocurrencies, but I would be even sillier if I were to say that the Indian government does.

The Dems are still claiming that welfare spending withered away during the Trump years. But that's obvious nonsense, and Trump's megaspending slathered trillions of dollars on pretty much everything.

Like other "antidiscrimination" schemes, the Equality Act is just another way to to extend federal power over every private institution and aspect of private life.