GET NEWS AND ARTICLES IN YOUR INBOXPrint
A
A
Home | Wire | 2015 FBI Report: Homicides Still Near 1950s Levels

Much of the media has breathlessly reported the news as if an indication of some new trend. The left is reporting it as if it's proof of too little gun control, while the right is reporting the news as evidence of too many immigrants. Trump, of course has made homicides by immigrants a staple in many of his speeches.

In fact, the increase in homicides is driven by a small number of specific metropolitan areas and neighborhoods. Most homicides are committed by native-born Americans. The vast majority of Americans have likely never been safer from homicide.

But first, let's look at the nationwide trend. The increase from 2014 to 2015 is clear in the graph: 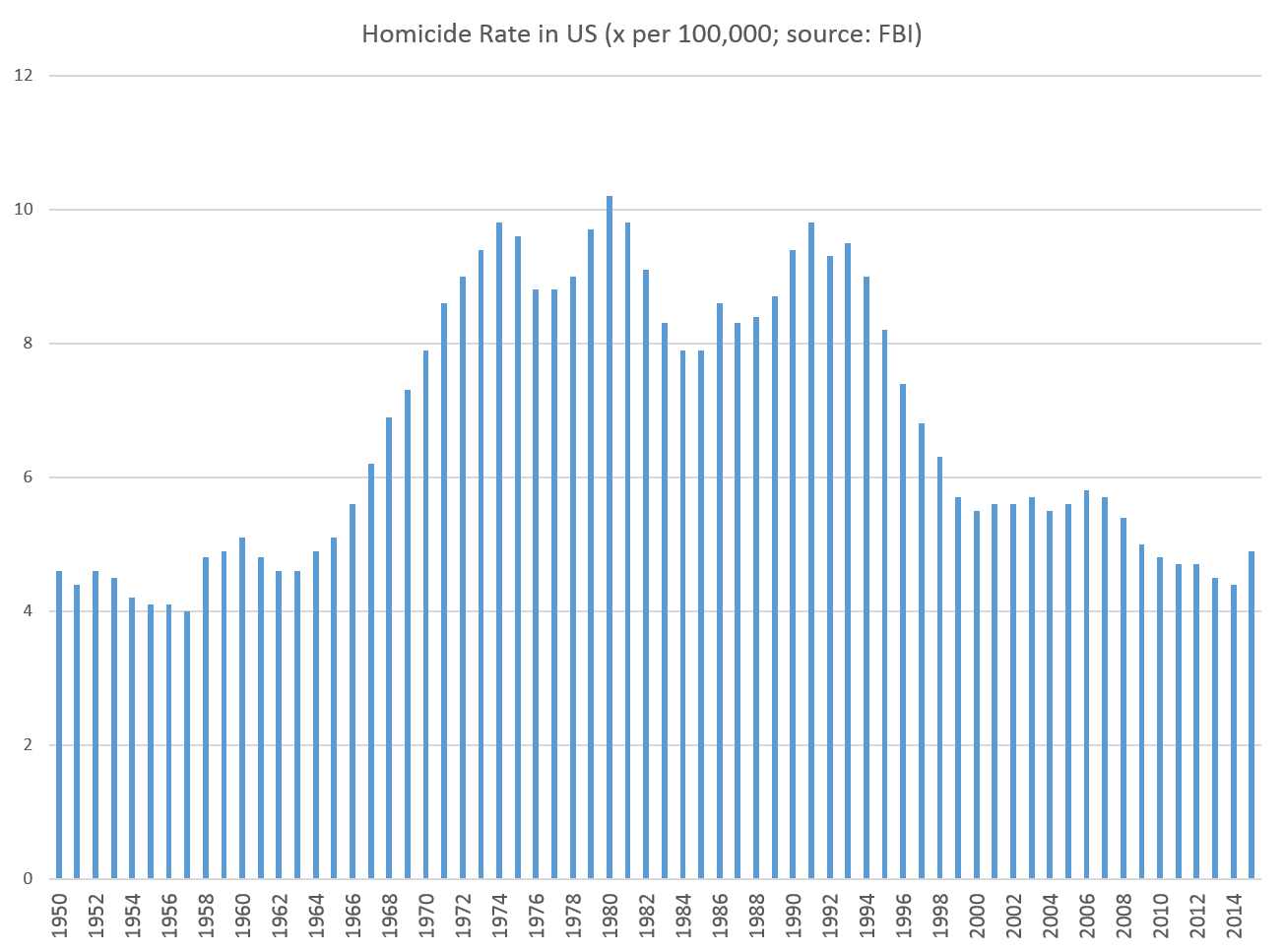 While it's true that 2015 marks a six-year high, the overall trend remains downward, and the 2015 homicide rate is comparable to that recorded in 1959.

Indeed, as the FBI report itself notes, the murder rate is down 15 percent over the past decade (since 2006).

Perhaps more importantly, the increase in intentional homicide was anything but a nationwide, general phenomenon. In response to the release of the new data, New York Magazine reported:

Half of the entire increase in big-city homicides was concentrated in just seven municipalities — Baltimore, Chicago, Cleveland, Houston, Milwaukee, Nashville, and Washington.

And only in Baltimore was the spike in homicides sharp enough to return the city to a historically high murder rate. While Charm City suffered a historic high of 55 homicides per 100,000 residents in 2015, for the seven cities collectively that figure was 21. Which is significantly lower than it was throughout the 1990s. 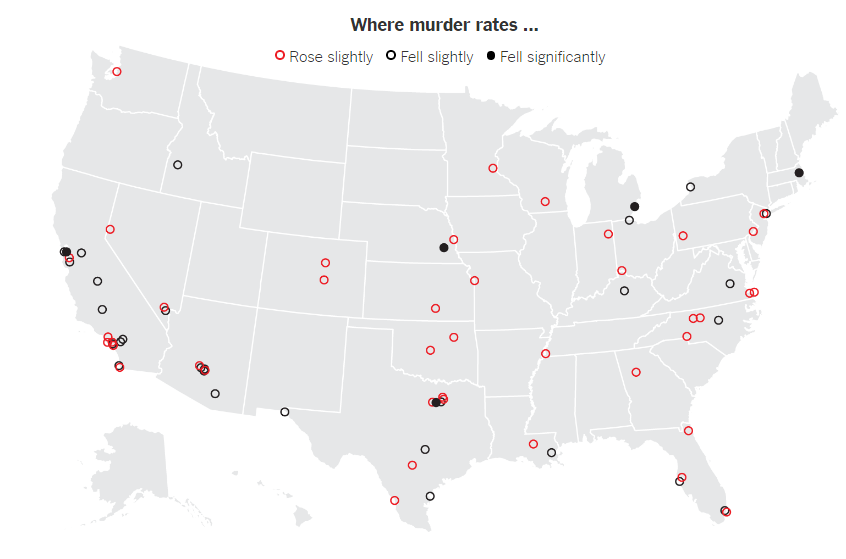 Looking at the 2015 rates compared across metro areas, we find immense differences in overall homicide rate: 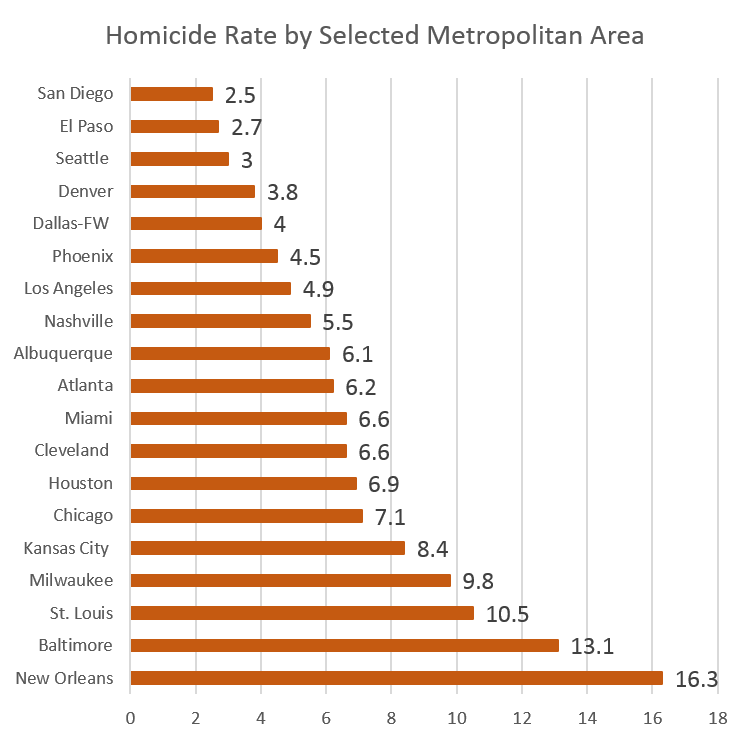 Of course, these metropolitan areas can then be broken down into neighborhoods, and in many cases, increases in homicides are held to small areas within a metro area.

But why are these areas so affected? There are many issues at work here including demographics, income levels, age of the population, and more. One related issue that has gained increased prominence in recent years is the incarceration rate and the fact that incarceration rates cannot be shown to reduce violent crime. In fact, incarceration may have the opposite effect. As noted by Justin Murray here, the US is notable for employing lengthy prison terms for infractions that would receive a fine or probation in many other countries.

New York expands on this:

But our homicide problem is concentrated in some of the most heavily incarcerated communities on planet Earth. To be sure, more effective law enforcement is needed in these neighborhoods — Chicago’s abysmal homicide clearance rate emboldens offenders and enables retaliatory violence to proliferate. But sentences for violent crime in America are already aberrantly high, and there is little evidence that such draconian punishments deter crime or facilitate rehabilitation. Which is to say: Increasing the certainty that violent criminals will be punished for their crimes is critical to deterrence; increasing the severity of the punishments they receive is not. Despite this fact, anti-crime politics in the United States have often focused on the latter.

In other words, government police often do an extremely poor job of catching violent criminals. But, they make up for it by locking up petty offenders for longer periods of time. Consumed with cracking down on small-time drug users, loiterers, and people who sell un-taxed cigarettes, real criminals go free and stolen property goes un-returned. But the prisons are packed more full of people than most anywhere else on earth.

Indeed, there is evidence that incarcerating people for small infractions makes them more likely to commit crimes later. Because incarceration can have long term affects on one's ability to earn a living through legal means, researcher Michael Mueller-Smith concluded "incarceration led to increased criminality for inmates after re-entry."

What About Gun Control?

Don't be surprised, though, when gun control advocates use the latest data to claim that something must be done about the "epidemic" of violence. As even The New York Times and New York magazine make clear, though, most of the United States is remarkably safe, with homicide rates among the world's lowest. 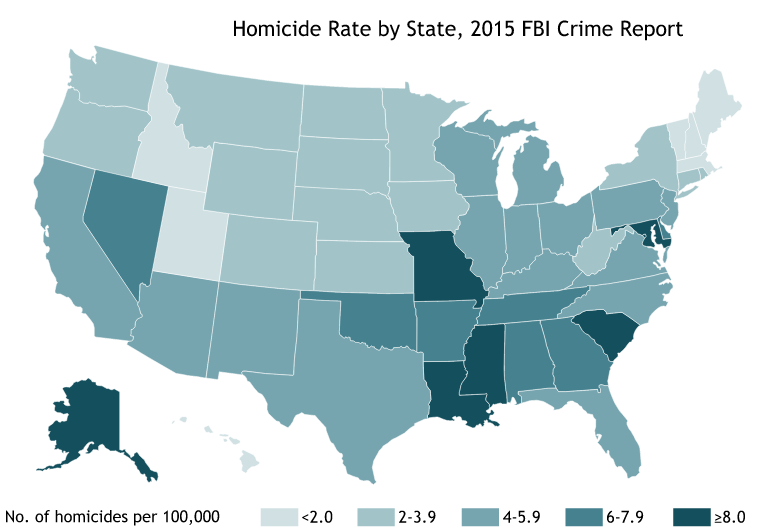 Indeed, when we look at homicide rates by state, we find that states like New Hampshire, Idaho, and Vermont, which are among the most lenient states in terms of gun ownership and have some of the lowest homicide rates. The same can be said of much of the upper Midwest and the Rocky Mountain west. 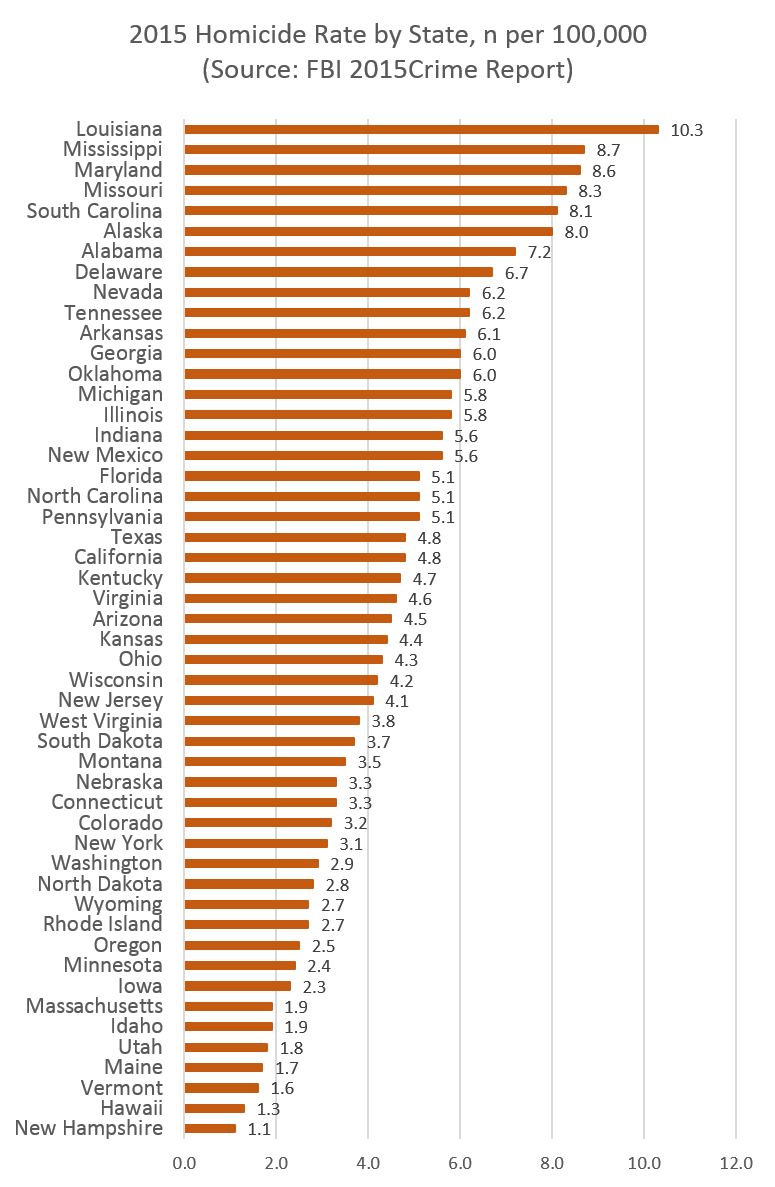 Moreover, the homicide rate has been cut in half over the past 20 years as total firearms ownership has increased, and as statewide authorization for so-called concealed carry has spread as well.1  Some Americans realize this, which is why, according to Gallup, 56% of people polled said the US would be safer with more people carrying concealed weapons.

Significantly, most Americans who do own guns report doing so for personal protection. Their desire for a Plan B in case of failed policing efforts appears to be warranted. Police departments devote immense amounts of resources to drug offenses while violent crimes go unsolved. As The Economist reported last year:

America’s homicide clearance rate—the percentage of solved crimes that lead to arrest—has fallen considerably in the past 50 years, from around 90% in 1965 to around 64% in 2012, according to federal statistics. This means more than 211,000 homicides committed since 1980 remain unsolved. Every year introduces nearly 5,000 more.

Rendering large percentages of the population unemployable through incarceration doesn't help much either.

And, of course, there is the problem of the fact that income growth in the United States is going nowhere. By three different measures — in terms of household median, individual median, and income reported to the IRS — incomes in the US have been flat since 2001. Even worse, incomes for the lowest 20 percent are at a 20-year low.

If anything, its remarkable that the homicide rate has been declining as much as it has. With government relentlessly making it more difficult to open a business or earn a living, and with a police force that leaves a third of homicides unsolved, we could be looking at a far worse situation. 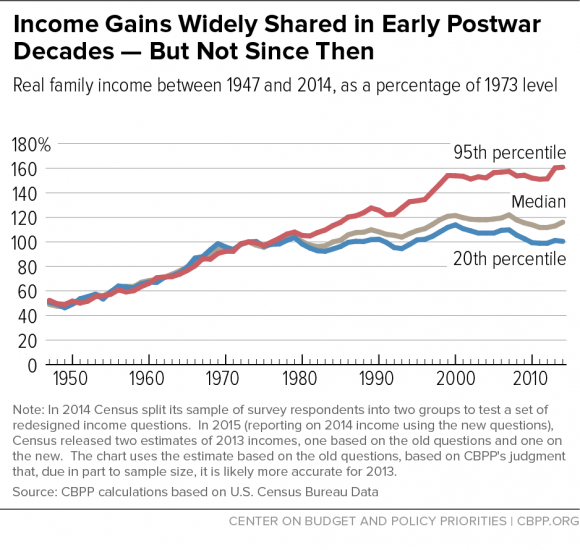