GET NEWS AND ARTICLES IN YOUR INBOXPrint
A
A
Home | Mises Library | World War I in Our Minds: A Historical View 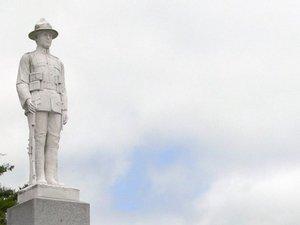 The fiftieth anniversary of the First World War in 1964 felt nothing like the current centennial observances. It is worth asking what has changed. When I was growing up in the sixties in a small town in Texas, World War I seemed as remote to me as the Revolutionary War. Not that the conflict was not unknown to me. In our city park there was a statue of a First World War soldier and a memorial to hometown sons who had died in the war. And my grandmother and grandfather told me stories of relief and celebration in 1918 at the war’s end.

At school, the dumbing down of “social studies” was already well underway, but my teachers did mention the war, though with few details included. Most of those possessed of a public school education in the mid-sixties had at least a chance of encountering Alan Seeger’s poem, “I Have a Rendezvous With Death.” And I had heard of historical episodes like the Lost Battalion.

But by 1964, World War I was always in the shadow of World War II. With its death rendezvous and lost battalions, the First World War was pretty much a downer, while The Good War was a poignant but ennobling upper. The Good War seemed to overwhelm everything with all the movies, the survivors, the stories, glorious Normandy, the Bulge, and all the rest.

But even when blinded by the brightness of the Good War, many educated Americans remembered the great revisionist controversies of the twenties and thirties. In the immediate wake of the first war, a number of American historians produced histories demonstrating that the Germans were hardly the only power to deserve blame for the coming of the war. These “revisionists” — Sidney B. Fay, Charles Beard, Harry Elmer Barnes, H.C. Engelbrecht and Bernie Hanighen, and others — revised much of the received history put out by the Entente governments and the patriotic historians who supported the party line. Since we now call numerous schools of historical interpretation in the United States “revisionist,” I will call this early revisionist tradition (with a nod to Paul Gottfried) “paleo-revisionists.” These historians brought different perspectives to the history of their time, but one commonality was that they all pretty much decried the war as a European affair which the United States should have left alone. This movement swelled until the glorious waves of World War II interventionism simply washed over doubts and questions about World War I.

Yet the 1960s was also a turning point in the American consideration of World War I, at least in some respects. Quite apart from the paleo-revisionist history of the war’s origins, the fiftieth anniversary brought forth all kinds of commemorative material, and especially some great first-hand accounts. In this regard, perhaps the most outstanding book is the collection of survivors’ essays edited by George Panichas, The Promise of Greatness: The War of 1914–1918 (1968). Everything taken together, this was no “flood,” but in spite of the American public’s previous lack of interest, there was some fine and evocative writing that came out in response to the anniversary.

Meanwhile, in German universities the sixties brought a stormy historiographical controversy known as the Fischer Thesis Debate, a debate which hung on newly-examined German documents which seemed to show that the Germans were totally guilty in starting the war after all (hence, the debate).Now only a few American students of modern Europe knew anything of this dispute. Still, the European controversy and the fiftieth anniversary memorial writing did arouse interest among scholars, and a few began to rethink World War I. One of these, Columbia historian René Albrecht-Carrié, wrote a small history of the war aimed at a broad audience: The Meaning of the First World War (1965). His book was brief, theme-centered, and even uninformative about many aspects of the war — the military part, for example. But Albrecht-Carrié made one central point persuasively: the First World War was the profound event of the twentieth century world. The great upheavals of the century, he asserted in somewhat Tolkienesque idiom, came from the deeper forces which “broke through” in the years 1916 and 1917. Increased American interest in a forgotten period also showed in the collection of mainstream historians’ opinions in the 1967 book edited by Jack Roth, World War I: A Turning Point in Modern History. By the time I got to college in the early seventies, a couple of young, energetic history professors I encountered had picked up on this new trend, emphasizing in many ways the centrality of World War I to modern history.

Even if most of the renewed study of the war was not revisionist, however, much of it harmonized quite well with the paleo-revisionist approach, especially the revisionist goals of investigating neglected aspects of history and of attempting to look beyond patriotic glorifications of the conflict. Much in the new studies also harmonized with revisionism by emphasizing agency and individuality among soldiers and other “groups” normally treated collectively. John Keegan was nowhere near the revisionist camp, but his 1976 book, The Face of Battle, introduced a whole new interest in individual motivation on the battlefield. Keegan’s whole approach was to explore the faces of the faceless mass of British soldiers, in this case at the Battle of the Somme. Trench Warfare 1914–1918: The Live and Let Live System (1980), Tony Ashworth’s intense appraisal of soldiers’ informal truces during the war was another example of a book with fairly broad circulation that delved into individual rather than mass behavior and motivation. And perhaps most importantly, the great literary historian Paul Fussell gave the world his masterpiece, The Great War and Modern Memory, in 1975, thereby emphasizing the profoundly individual analysis of individual suffering and memory as against state-mediated memorials.

One way or the other, since the late eighties, European historiographical trends and this fairly broad American appreciation of the importance of the war ignited what has been a steady cottage industry in books about the 1914–1918 war. Yale historian Jay Winter helped create a very influential PBS documentary series The Great War and the Shaping of the 20th Century in 1996. Indeed, Winter and numerous international scholars have reinvigorated the field of World War I studies from the nineties onward.

One of the most important influences on paleo-revisionists after 1945 was Ludwig von Mises. His contributions consisted not so much of detailed studies as of theoretical analyses which put the war into the context of the growing state. This analysis appeared in his wartime book, Omnipotent Government , but also the earlier Nation, State, and Economy and many other works. Mises really offered the revisionist school a theoretical framework which had been missing. He also encouraged many students in this direction, including Murray N. Rothbard and Ralph Raico. Rothbard contributed very substantially to the field of technical studies of World War I as he folded the theory of Mises into the older revisionist school. His works on war collectivism, “war as fulfillment,” the financial history of the war, and other topics stand at center stage in modern paleo-revisionism. Indeed, Rothbard really expanded the agenda of revisionism to encompass a variety of new topics in intellectual, economic, and social history relative to the first conflict. Along with Mises, Rothbard took revisionism in a direction away from the unqualified support of Germany under the Kaiser, a kind of caricature position in which some revisionists had become stuck. Rothbard critiqued the state as state, including the German version of it.

In this renewed tradition, the works of Ralph Raico, Robert Higgs, Jeff Riggenbach, Hans-Hermann Hoppe, Richard Gamble, Paul Gottfried, Thomas Woods, Joseph Stromberg, and others expanded the materials and subjects of revisionist studies of the war, giving new life to an older school of thought, very much parallel to the re-emergence of Austrian economics as a dynamic, rigorous system of scholary thought.

There is still much to do, but Austrian-minded historians from various disciplines now have a much broader platform to work from. Though I probably tend to be a glass-half-full judge of historical analysis and social progress, considering the changes I have witnessed from the fiftieth anniversary to the hundredth, I think the picture of the First World War in our minds is fuller and more accurate, the result of a quantum leap in historical knowledge and analysis from the fiftieth to the hundredth anniversary of that massive conflict. Like the Battalion, this past was not really lost, just hard to get to.