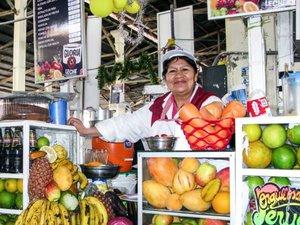 Peruvians were pleasantly surprised, if a little bewildered, by the news that on the 8th of October they were to receive an extended weekend holiday. The reason for the impromptu vacation was the arrival of the “international community” in Lima for the IMF and World Bank’s annual board of governors meeting. Peru’s president, Ollanta Humala (enjoying a brief respite from an ongoing scandal involving his wife’s embezzlement of state funds), encouraged Peruvians to take pride in the fact that the leaders of international finance would deign to choose Peru as the venue for their conference and suggested that it “demonstrates to the whole world, the excellent stewardship of the Peruvian economy and the secure climate in which investment can be made” under his auspices.

These comments are interesting because Peru is indeed an undeniable economic success story. If you want a casebook example of markets lifting people out of poverty, look no further than Peru. However, what Humala skipped over is the fact this transformation took place long before his presidency and also that its causes are rooted not so much in wise statecraft, but rather Peru’s long and venerable tradition of state incompetency which has left it up to individuals to provide for themselves.

Fifteen years ago, the economist Hernando de Soto in his provocative book The Mystery of Capital wrote at length about the byzantine workings of Peruvian bureaucracy where registering titles to property or incorporating a business involved jumping through expensive administrative hoops and waiting not months but years for the right approvals. De Soto lamented the fact that this lack of legal recognition prevented the poor collateralizing and leveraging what were in reality quite considerable assets. However, his analysis overlooked the important question of whether, in the presence of an efficient Western-style regulatory state, ordinary Peruvians would have been able to accumulate the wealth to leverage in the first place.

It still remains — as every Peruvian and occasionally horrified western visitor knows — that Peru is a place where if you want to do something no-one, especially not the government, is going to stop you.

If you want a house, you can go to the outskirts of a city as millions of other Peruvians have done, take a piece of land and build one. If you want a business just start trading, on the street. If you want a garment factory just start one, in your house. Ditto if you want to set up a restaurant or even a school. It may be the case, as de Soto pointed out, that on paper it takes twenty-six months to officially recognize a bus route, but that did not stop enterprising individuals setting their vans or converted school buses on the road, marking out the beginnings of what are now the surprisingly efficient (if crowded) bus routes that carry passengers to almost every imaginable nook of Peru’s sprawling capital, for a fraction of a dollar. The successful bus and van enterprise is a remarkable display of spontaneous order in action.

In Peru there is no need to pay a consultation fee to a gatekeeper to authorize a medical procedure: blood analyses, endoscopies, and radiograms can be purchased on the spot from an array of sole proprietor clinics. All kinds of generic drugs can be bought under the counter. If in need of some entertainment, on nearly every street you can purchase a hi-resolution pirated DVD of the latest Hollywood blockbuster.

It’s not like Peruvians have never heard of regulatory permits, taxes, professional licensing, zoning laws, patent protections and so forth; they exist in a statute book somewhere, but they are largely abstract concepts, which, for most of the time can be safely ignored. Everything is for sale and barriers to entry are virtually non-existent.

The result of this serendipitous meeting of the cavalier Latin spirit with an apathetic state apparatus is a resilient civil society where low-cost privately provided health and education are available to all and people enjoy nutritional- and life-expectancy levels that sit high on the World Bank’s own development indices.

However, this achievement is only inadequately recorded in GDP statistics and is certainly not being celebrated by Peru’s president or the dignitaries at the World Bank. Indeed, rather than recognize informal and small enterprises as the true instantiation of free market principles, and the quintessence of liberty, the Bank quite openly decries its existence.

For the World Bank, absence of regulation automatically equates to underdevelopment. For the Bank, “development” is the attainment of specified metrics in consumption and social spending, years of state education, and implementation of legal provisions like minimum wage entitlements. The problem is that realization of these development indicators rather conveniently entails a populace in wage-labor, working for regulated businesses (corporations), where they can be taxed at the source. These taxes then are used to fund an array of social programs manned by "poverty professionals" who dedicate their efforts to finding out why everyone is strangely depressed once no-one is allowed to make a living that’s not mediated by state institutions or their corporate vassals.

This unimaginative development model also does nothing to detract attention from the questionable manner in which the Bank — and more specifically its private lending arm — the International Financial Corporation (IFC), work to bring people out of poverty. Peruvians are now quite aware of just how sincere the IFC’s motto of “creating opportunity where it’s needed most” really is.

For instance, one flagship project to provide access to high-quality health care saw the IFC provide a $120 million loan for the construction of the palatial Clínica Delgado now sitting in the middle of Lima’s exclusive Miraflores district. Lima’s residents can now enjoy consultations there for around $150.

Another needy Peruvian the IFC was happy to help was Peru’s richest man, Carlos Rodriguez Pastor, whose Intercorp group received $164 million dollars to expand its financial services divisions. Not to be outdone was Grupo Romero (owned by Peru’s wealthiest banking family) which received $180 million to renovate two vegetable oil processing plants, and Grupo Gloria which received a $25 million loan to build a factory that would solidify their total monopoly on dairy processing in Peru.

The IFC has also extended its influence into Peru’s tourist industry which attracts millions each year and provides a sizeable income to small companies, local tour operators, and indigenous communities that run it. Despite this success story, the IFC evidently thinks that there are still some Peruvians who could use a helping hand, like the plucky “Peru Holding de Turismo” group and its partner the “Orient Express” hotel chain who own and manage some of Peru’s most lucrative real estate. They received a $40 million loan to refurbish a number of luxury hotels in the Cusco region, catering to precisely the kind of jet-setting international elite sitting on the board of the IFC. One can only assume that the planners at the World Bank would like Cusco to become the Latin American Davos, all part of a poverty reduction strategy to assure Peruvians bright futures in hospitality, catering, and adult entertainment.

The examples go on and on as indeed does the story which can be retold from any other country in the “developing” world. The only thing that changes are the names of the domestic elites and some of the western corporations in receipt of this lucrative form of international state patronage.

The thousands of Peruvians who turned out to protest the conference are probably right to be suspicious of the motives of the bureaucrats and directors of the international institutions whose plans (like the Trans Pacific Partnership Agreement signed at the conference) and economic models would, if realized, remove real competition, deaden entrepreneurship, and curtail their freedoms.

As the conference came to a close, the sun came out and some of the informal street vendors, who had been rounded up and pushed outside the conference area before it commenced, began making their way back. If they looked hard enough they might have recognized Christine Lagarde, Jim Yong Kim, et al., speeding away in their blacked-out government cars. One had to wonder, whether this taxpayer-funded financial elite would recognize a free-market, even if were staring them in the face.

Simon Wilson is a qualified wealth manager with a degree in economics and philosophy from...

Opponents of austerity have come out to denounce the idea that it’s bad for governments to borrow. They note that...