Why They Hate Peace 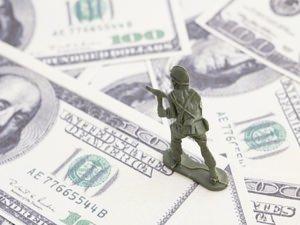 [Editor’s Note: This is a selection from the last chapter of Ron Paul’s A Foreign Policy of Freedom.]

The most succinct statement about how governments get their people to support war came from Hermann Goering at the Nuremberg trials after World War II:

Why of course the people don’t want war. Why should some poor slob on a farm want to risk his life in a war when the best he can get out of it is to come back to his farm in one piece? Naturally, the common people don’t want war; neither in Russia, nor in England, nor for that matter in Germany. That is understood. But, after all, it is the leaders of the country who determine the policy and it is always a simple matter to drag the people along, whether it is a democracy, or a fascist dictatorship, or a parliament, or a communist dictatorship. Voice or no voice, the people can always be brought to the bidding of the leaders. All you have to do is tell them they are being attacked, and denounce the peacemakers for lack of patriotism and exposing the country to danger. It works the same in any country.

It is rather frightening that a convicted Nazi war criminal latched onto an eternal truth!

It should be harder to promote war, especially when there are so many regrets in the end. In the last 60 years, the American people have had little say over decisions to wage war. We have allowed a succession of presidents and the United Nations to decide when and if we go to war, without an express congressional declaration as the Constitution mandates.

Since 1945, our country has been involved in over 70 active or covert foreign engagements. On numerous occasions we have provided weapons and funds to both sides in a conflict. It is not unusual for our so-called allies to turn on us and use these weapons against American troops. In recent decades we have been both allies and enemies of Saddam Hussein, Osama bin Laden, and the Islamists in Iran. And where has it gotten us? The endless costs resulting from our foolish policies, in human lives, injuries, tax dollars, inflation, and deficits, will burden generations to come. For civilization to advance, we must reduce the number of wars fought. Two conditions must be met if we hope to achieve this.

First, all military (and covert paramilitary) personnel worldwide must refuse to initiate offensive wars beyond their borders. This must become a matter of personal honor for every individual. Switzerland is an example of a nation that stands strongly prepared to defend herself, yet refuses to send troops abroad looking for trouble.

Second, the true nature of war must be laid bare, and the glorification must end. Instead of promoting war heroes with parades and medals for wars not fought in the true defense of our country, we should more honestly contemplate the real results of war: death, destruction, horrible wounds, civilian casualties, economic costs, and the loss of liberty at home.

The neoconservative belief that war is inherently patriotic, beneficial, manly, and necessary for human progress must be debunked. These war promoters never send themselves or their own children off to fight.

Some believe economic sanctions and blockades are acceptable alternatives to invasion and occupation. But these too are acts of war, and those on the receiving end rarely capitulate to the pressure. More likely they remain bitter enemies, and resort to terrorism when unable to confront us in a conventional military fashion.

Inflation, sanctions, and military threats all distort international trade and hurt average people in all countries involved, while usually not really hurting the targeted dictators themselves. Our bellicose approach encourages protectionism, authoritarianism, militant nationalism, and go-it-alone isolationism. Our government preaches free trade and commerce, yet condemns those who want any restraints on the use of our military worldwide. We refuse to see how isolated we have become. Our loyal allies are few, and while the UN does our bidding only when we buy the votes we need, our enemies multiply. A billion Muslims around the world now see the US as a pariah.

Our military is more often used to protect private capital overseas, such as oil and natural resources, than it is to protect our own borders. Protecting ourselves from real outside threats is no longer the focus of defense policy, as globalists become more influential inside and outside our government.

The weapons industry never actually advocates killing to enhance its profits, but a policy of endless war and eternal enemies benefits it greatly. Some advocate cold war strategies, like those used against the Soviets, against the unnamed “terrorists.” It’s good for business!

Many neoconservatives are not bashful about this:

Thus, paradoxically, peace increases our peril, by making discipline less urgent, encouraging some of our worst instincts, and depriving us of some of our best leaders. The great Prussian general Helmuth von Moltke knew whereof he spoke when he wrote a friend, “Everlasting peace is a dream, not even a pleasant one; war is a necessary part of God’s arrangement of the world. ... Without war the world would deteriorate into materialism.” As usual, Machiavelli dots his i’s and crosses the t’s: it’s not just that peace undermines discipline and thereby gives the destructive vices greater sway. If we actually achieved peace, “Indolence would either make (the state) effeminate or shatter her unity; and two things together, or each by itself, would be the cause of her ruin ...” This is Machiavelli’s variation on a theme by Mitterrand: the absence of movement is the beginning of defeat. (Michael Ledeen, Machiavelli on Modern Leadership)

Those like Ledeen who approvingly believe in “perpetual struggle” generally are globalists, uninterested in national sovereignty and borders. True national defense is of little concern to them. That’s why military bases are closed in the United States regardless of their strategic value, while several new bases are built in the Persian Gulf, even though they provoke our enemies to declare jihad against us. The new Cold War justifies everything.