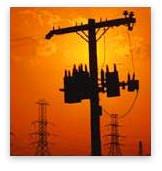 To prevent "burdensome competition" among utilities in a given area, governments have often granted legal local monopolies to specific water, electricity, and natural gas companies — or provided the services themselves.

Competing firms have been legally excluded from the utility market, with disastrous results. Occasional blackouts and deactivations of hot water are common in the experience of many Americans — while a free market in, say, groceries, brings about no conspicuous shortages. Furthermore, prices for the "public" utilities are on the rise — typically accompanied by declines, rather than improvements, in the quality of service.

This trend is not accidental. Rather, as the economic thinker Friedrich A. Hayek (1899-1992) would have pointed out, it is an inevitable consequence of government meddling in the utility market. Government restricts competition in this realm — competition essential to discovering the optimal way to produce the services so as to maximize profit and efficiency. Without the dynamics of a fully free market, utility providers have no way of knowing how to work to their and to consumers' advantage — and everybody's quality of life inevitably suffers as a result.

The managers of the monopoly utilities think that the optimal means to provide a given utility service is already known. Acting on this assumption, they charge consumers on the basis of a "cost-plus" approach. The government determines the price charged by adding the "cost" of the service itself and the "normal rate of return" on the capital goods used in furnishing the service.

This view, of course, fallaciously presumes that there is some fixed cost of a given service — a cost that can be determined in advance — as well as a "normal rate of return" that need not be subject to market fluctuations. Yet, as Hayek demonstrated, this completely misconstrues the invaluable function of prices as transmitters of knowledge about genuine value — value that does not exist in some fixed, static state.

The Market Is a Process, Not a State.

The "mainstream" economic view of markets, which Hayek's work challenges, treats the market as a state rather than a process. Mainstream economics focuses overwhelmingly on analyzing states of equilibrium — seldom attained in actual economies — without concerning itself with how the market gets there.

Furthermore, the mainstream view more often than not assumes that every economic actor possesses perfect information about the entire economy and that his particular value scale reflects the single value scale exhibited by all other participants in the economy. The managers of the "public" utilities frequently commit this fallacy; they believe that they have at their disposal information about what the optimal price of their service ought to be.

Hayek, however, understood the market to be a process, a system that necessarily involves an empirical element: the observed fact that all market participants possess imperfect and incomplete knowledge. Rather than analyzing perfect static equilibria, the central question of economics, for Hayek, becomes how the market facilitates the acquisition and dispersal of knowledge. According to Hayek, there is no single value scale in a market economy; no single goal exists toward which the economy tends and which it achieves in a perfect equilibrium state.

No single individual possesses all the facts, and different individuals have different realms of skill and expertise. There are discrepancies in information. Applied to the utility market, this means that some individuals who are excluded from it by government force know valuable data that the monopoly managers do not. They might know about more economical techniques of obtaining electricity or processing water; they might have technical knowledge enabling them to design better electric grids or piping systems. They might even have tacit or inarticulable knowledge that helps them run a business on a day-to-day basis — knowledge that is difficult or impossible to put into words and communicate to another.

Rather than solely relying on formal mathematical constructions of static equilibria, the economist needs to examine empirical reality and construct from his observations a theory explaining how the market coordinates discrepancies in information, skill, and the individual plans of economic actors. With this vast diversity present, how does the market assist people in matching each other's expectations? How does the market remedy genuinely false and mistaken expectations on the part of certain economic actors?

The Fallacy of "Perfect Competition"

Mainstream economists often describe the "optimal" function of a market using a simple equation: P=MC, where price for a product is equal to the marginal cost of producing that product. This, under mainstream models, describes a state of "perfect competition." Government managers of utilities often try to use the data obtained through models of "perfect competition" and price utility services accordingly.

Such an approach entirely misunderstands the function of competition. Indeed, it evades and assumes away the very question that a theory of competition ought to answer: How does a competitive market tend to bring about a harmonizing of prices and marginal costs, supply and demand? Furthermore, the entire purpose and usefulness of competition consists of determining what the optimal costs and prices for a given set of goods are.

There is no way to know what these prices and costs would be in advance and then expect competition to set them at that predicted level. Rather, competitive activities lead to a discovery of optimal prices and costs, a knowledge that cannot be achieved before the exercise of competition brings it to our attention. Competition, by definition, cannot be some optimal end state. It is a constant, continual process to figure out the optimal mode of production in an economy, and it arrives at progressively better answers to this challenge. Various economic actors can all have different and useful knowledge about how to improve the provision of utilities. They can only take full advantage of this knowledge, however, if a free-market price system is firmly in place.

In Hayek's view, the price structure of the free market is a potent tool for remedying the problem of imperfect knowledge and economizing on knowledge. Prices give consumers all the information they need to properly adjust their economic decisions — even though most consumers will never know the full details of the market disturbance that made the economic adjustment necessary in the first place.

For example, a natural gas pipeline might unexpectedly burst in Canada — unbeknownst to almost everybody in the United States. The decrease in the supply of natural gas will imply higher prices to be paid by local private gas providers. Most providers and consumers of natural gas will have never heard of the original mishap, but the new higher prices on natural gas inform them of the need to economize on it. Economic actors will now purchase less gas than they would have under the lower price.

Furthermore, those willing to purchase the most gas under the new higher price will get all the gas they truly need. They express their comparatively higher valuation for gas through the willingness to trade more money for it than other market participants. A single number — the price of a product — allows all the relevant actors in the marketplace to adjust their decisions in such a manner as to benefit them. Even if, in a free market, they had fully known the original cause of the price alteration, they could not have made a better decision than one guided solely by responding to the price shift.

Prices are, furthermore, accurate indicators of the actual supply of and demand for a product because competition makes them so. "Competition" cannot be a model incorporating prior perfect knowledge of economic data, because competition is itself a discovery procedure of that data. The "logical" end result of competition cannot be known until the competition has taken place. Hayek's theory thus rules out the possibility of a monopoly government accurately charging a "competitive" price for a service it provides.

Coercion is bound to fail.

But, because the government is a coercive monopoly, it is immune to competition, having barred all prospective competitors from the utility market via the threat of force. The government cannot know what the true cost of its service is, since it did not allow the competitive process to discover it. Rather, whatever value the government designates to be the "cost" will be an arbitrary number.

In a competitive market, private businessmen — driven by the profit motive — would have continually discovered better ways to provide utility services. They would have figured out hitherto unknown ways to cut costs, increase productivity, and eliminate waste.

The government, by restricting competition, prevents these discoveries from taking place and relegates all the consumers of public utilities to having to pay far more than they otherwise might have.

Friedrich Hayek provides an eloquent argument for allowing the market to carry out this coordination; any government intervention with the structure of prices and competition will inevitably distort both and impede the discovery process a free market provides. Hayek shows that the manifest disaster accompanying government-enforced utility monopolies is not mere correlation; it is caused by coercive meddling with a remarkable competitive price system that the regulators fail to understand or appreciate.

G. Stolyarov II is a student at Hillsdale College and contributor to Enter Stage Right, The Autonomist, and Le Quebecois Libre, Senior Writer for The Liberal Institute, and Editor-in-Chief of The Rational Argumentator.  Send him mail. Comment on the blog.