Why Law School Costs So Much 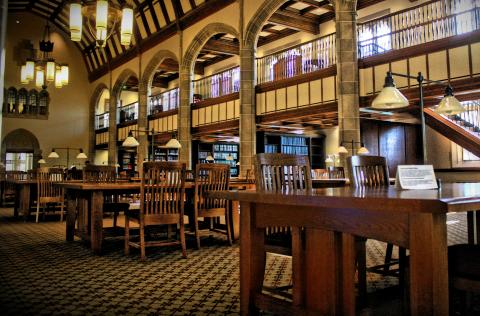 According to a recently released report, the high cost of attending law school is making it hard for government agencies and "public interest"organizations to recruit good new lawyers. You may be inclined to laugh and say, "So what’s the problem?" but the report—"From Paper Chase to Money Chase," released by a group named Equal Justice Works—inadvertently calls attention to a harmful market intervention that ought to be ended.

"From Paper Chase to Money Chase" concludes, based on a rather small and self-selected sampling of recent law school graduates, that the average law student today leaves school with debts of more than $84,000. Many of the respondents say that the need to pay off their law school debts affects their choice of employment options. Their high debt levels make them chase the money—that is, they gravitate toward the higher pay that law firms offer. The public and non-profit sectors therefore lose out on a large number of those debt-plagued students who might otherwise have chosen to devote themselves to "public service."

The report then asked public sector employers if they were having difficulty in recruitment. Unsurprisingly, most said that they were, although the degree of this difficulty is not explored. Are there actually empty desks at government agencies and organizations like the Sierra Club because they just can’t find capable lawyers who will work for the pay they can offer?  I strongly doubt it.

The point of the study is to push for subsidies for law school debts. It extols "loan repayment assistance plans" (LRAPs) as a way to level the playing field. Equal Justice Works wants to see other people pay off some of the debt incurred by graduates who choose to go into government or "public service" law. Government agencies might establish LRAPs, thus spreading the cost of legal education to the taxpayers, or law schools might establish them, thus spreading the cost to other students and their donors.

The Root of the Problem

The obvious question that "From Paper Chase to Money Chase" entirely ignores is why the cost of law school is so high. Should a legal education have to cost as much as it does?  Before we jump on the bandwagon for subsidies for the cost of law school, it would make sense to ask whether those costs are not artificially inflated to begin with.

They are. Thanks to connivance between state legislatures and the American Bar Association, law school costs much more than it needs to. If we allowed a free market in legal education, the cost of preparing for a legal career would fall dramatically.

To see how this situation came about, let us go back in time. A century will suffice. In 1902, those who aspired to enter the legal profession could take several different routes. One was simply to study law individually—as Abraham Lincoln did. A second route was to apprentice yourself into a law firm and learn what you needed to know in that environment—as Clarence Darrow did. The third option was to go to law school.

Law schools then varied greatly, with some offering a one-year course of study, many offering a two-year program, and a small number of elite schools offering a three-year curriculum.  A prospective lawyer could choose the type of legal education he thought best, given his circumstances. Apprenticeship was the most common. Notable lawyers had risen into the profession through each of the approaches just discussed.

In 1921, the American Bar Association undertook to "professionalize" legal education. Using the age-old excuse that consumers would benefit from "high standards," the ABA sought to impose the three-year law school model as the only route into the legal profession. In truth, consumer welfare had nothing to do with it. Many lawyers were complaining of excessive competition that kept fees lower than they thought they should be and simply wanted to restrict supply in order to raise price. A renowned member of the legal profession, federal judge Richard Posner, has likened it to a medieval guild, intent on restricting entry and limiting competition as much as possible. The guild-like attributes become strongly evident from 1921 on.

To accomplish its objective, the ABA began lobbying across the nation for statutes that would hamstring all kinds of legal study that weren’t in accordance with its model. Most of the states obliged, enacting laws that limited eligibility to take the state bar exam to individuals who had earned degrees from ABA-accredited law schools. Since most lawyers regard bar membership as important to their success, those laws shut down the non-law school avenues into the profession and put control of law schools into the hands of the ABA.

Currently, only four states, California, Tennessee, Alabama, and Massachusetts, allow a new graduate from a non-accredited law school to take the bar exam. In a number of other states, an out-of-state graduate can take the bar exam in the state where the unaccredited school is located and after practicing there for a period of years (at least three), may take the bar exam in his home state. Lawyers don’t often want to switch states and relive the headache of the bar exam, so this is only a tiny loophole in the ABA’s exclusion of nonconforming law schools.

Somewhat later, the ABA also took the offensive against legal practitioners who weren’t members of the bar, by successfully lobbying for laws to prohibit "unauthorized practice of law."  Even where a non-bar member gives perfectly good legal assistance to another person, who is aware that the individual assisting him isn’t a licensed attorney, the law against "unauthorized practice" has been violated. State and local unauthorized practice committees police illegal competition with the guild with the ferocity of junkyard dogs.

In its quest for a  monopoly over the training of future lawyers, the ABA was doing just what any self-interested guild would do—raising barriers to entry.

The ABA's accrediting body, the Council of the Section of Legal Eduction, has established standards that are designed to keep law school very costly and restrictive.

Among the most important are these:

All of those input rules drive up the cost of legal education greatly. For example, the tuition cost of attending any of the ABA-accredited law schools in the Boston area is more than twice the cost of attending the unaccredited Massachusetts School of Law (which charges about $12,000 per year). But that comparison certainly does not go far enough. If entrepreneurs were free to find ways of delivering the optimal amount of legal education, there is no reason to doubt that many lawyers would be able to obtain the education they needed at a far lower cost.

Isn’t there a justification for the ABA model, though?  Might it not be argued that, given the enormous amount of law we have these days, three years of law school is barely adequate?  Wouldn’t we have under-prepared lawyers if we again allowed law schools with one or two year programs?

The answer is no. The fact of the matter is that very little of what lawyers need to know is learned in law school. Every field of law is so vast that the most a student can do is to become familiar with the major rules and cases. Almost everything that he needs to know in his chosen area of practice he will learn on the job. Not infrequently, a lawyer winds up specializing in a field he didn't study at all in law school, and is none the worse for it.

Lawyers, like other professionals, have a strong incentive to make the optimal investment in knowledge. There is no need to require that prospective lawyers spend any particular length of time in schools of any particular kind. Lawyers will learn what they need to about workers’ compensation or intellectual property or commercial law or whatever they specialize in no matter what the state deems necessary for licensure. Mandating three years of law school doesn’t protect consumers from incompetence; it protects existing legal practitioners against new competitors and especially protects the employees of law schools against the effects of innovation and efficiency.

Should the state even license lawyers at all?  I maintain that licensure adds nothing to competence or reliability and have argued elsewhere that we should do away with mandatory licensure and repeal unauthorized practice of law statutes. (See my article, "The Lawyer Cartel.")

I’m not losing any sleep over the possibility that government agencies and "public interest" groups are having difficulty in recruiting lawyers. But it is still true that government intervention in the market for legal education has greatly driven up the cost of entering the legal profession—just as it has with many others. The solution is not to selectively subsidize that inflated cost, but instead to end the governmental meddling in the market for legal education. State legislatures can and should do that by repealing their laws that dictate how individuals must prepare for a career in law.

George C. Leef is the research director of the Martin Center for Academic Renewal in Raleigh, North Carolina. He was previously the president of Patrick Henry Associates, East Lansing, Michigan, an adjunct professor of law and economics, Northwood University, and a scholar with the Mackinac Center for Public Policy.