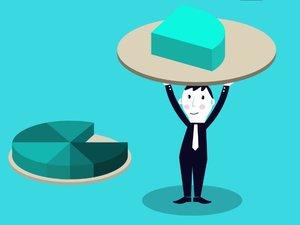 A good chunk of the debate over inequality today centers around what Milton Friedman identified as “the tendency to assume that there is a fixed pie, that one party can gain only at the expense of another.” This fallacy is one that any student of economics is familiar with, but the layman may not be: the fixed pie fallacy. The fixed pie fallacy is synonymous with the zero-sum fallacy in economics: that anyone’s benefit comes at someone else’s expense. In other words, if one person earns a dollar, someone else is worse off by a dollar. We know the logic behind the fallacy is faulty because if it were true, no transactions would take place. People aren’t so misinformed that they would remain blind to coming out the loser in half the transactions they take part in.

Well, maybe I’ve spoken too soon in saying that only the layman would be unfamiliar with this fallacy. Weighing in on the income inequality debate in a piece at the Financial Times, former Harvard President Larry Summers attempted to quantify how much better off most Americans would be had inequality remained at 1979 levels. “If the US had the same income distribution it had in 1979, the bottom 80 per cent of the population would have $1tn — or $11,000 per family — more. The top 1 per cent $1tn — or $750,000 — less,” writes Summers.

Bui was intellectually honest enough in his reporting of Summers’s argument that he included this comment: “Of course, this is a purely theoretical exercise. It combines two different worlds: an economy as big as today's, but with 1979 levels of inequality. Some economists would argue that this could never exist, because economic growth has been driven by forces, such as globalization and technological change, that have also driven up inequality.” A question that must be answered is whether or not the economic pie would be smaller, the same size, or larger had inequality not risen by the same extent since the late 70s. The consensus among rich countries is the last option: that inequality, contrary to popular belief, actually promotes growth. Quoting Harvard economist Robert Barro in the Journal of Economic Growth, “higher inequality tends to retard growth in poor countries and encourage growth in richer places.” Even Jared Bernstein in a report for the liberal Center for American Progress stated “there is not enough concrete proof to lead objective observers to unequivocally conclude that inequality has held back growth.”

Since we know that rising inequality has promoted growth above what it has otherwise been, we can’t simply look at economic output today and figure out how much each quintile would be earning had the income distribution remained at its 1979 levels. A good exercise would be to compare current levels of output and earnings distribution against the counterfactual: a smaller economy with 1979 levels of distribution.

In a recent debate hosted by Intelligence Squared U.S., Scott Winship of the Brookings Institution did what I outline. In his opening remarks, he argued:

So, essentially if you enlarge the pie enough, the economic pie enough, then the poor and middle class actually can get more pie even if their slice becomes skinnier.

If you claim that absent rising inequality, the middle class would have had thousands of dollars more than they did, as you sometimes hear, there are a couple of really big assumptions hidden behind that. One is that if we had capped the incomes at the top, that the economic pie would have become just as big as it actually did. The second assumption is that if we had capped those incomes, then essentially the proceeds would be equally distributed across the population. Now, in actuality, if we somehow managed to cap the incomes of the top 1 percent, what would likely happen is we'd be shifting incomes to knowledge workers and professionals who are in the upper middle class or in the rest of the top 10 percent.

To see how important these assumptions actually are, consider one possible outcome if we had successfully held the top 1 percent’s income share in 2007 to their 1979 level, okay? So assume, for sake of argument, that, that would have reduced economic growth, not by a lot, say, by 8 percent. And assume that the middle 20 percent, instead of receiving 20 percent of the proceeds from this redistribution, got 13 percent of the proceeds. Well, I've done the math, and what it works out to is that in this scenario the middle class actually would be no better off for having limited the increases at the top.

So, when we take into account the effects that inequality has on economic growth into the equation, Summers’s purely theoretical exercise becomes just that, a purely theoretical exercise. Quintiles at different levels of income distribution would not be thousands of dollars better off had inequality remained the same as it had in 1979 for the past thirty years, because the economy would not have grown by the same amount. We don’t even know if they would be any better off at all. The fixed pie fallacy may make for good politics, but it has no place in economic analysis.