Why I Have Hope 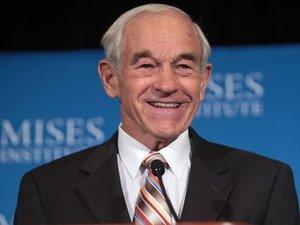 I think the most exciting message for me today is that things are changing.

Often, when I come to these events, people ask me, “isn’t this grueling, isn’t this very tough?” It’s not, though, and it’s actually a little bit selfish on my part, because I get energized when I meet all the young people here. It’s true there is a spread of ages here, but there are a lot of young people and some of them even come up to me and say “you introduced me to these ideas when I was in high school a few years ago.”

And it’s not just people at events like these. When I landed at the airport on my way here, I was approached by two young people who came up to talk to me. They didn’t know each other, but both spoke with foreign accents, and both said they were from Africa. They said they heard the message of liberty over the Internet, and they had been following me ever since 2008.

These are just examples, but I do think they represent a larger change that is taking place right now. Things are changing dramatically and in a favorable way.

We’re in this transition period right now where the attitudes are changing. But our views have been out there a long time, so we have to ask ourselves why we’re seeing more success now among the young and many future leaders.

Part of this is just due to greater availability of ideas. The Internet certainly helps, and a lot of the credit must go to organizations like the Mises Institute that make the ideas of liberty more easily available to everyone.

I also never imagined that my presidential campaigns would get the attention they did for our ideas. Our success in bringing new young people into the movement surpassed anything I thought was possible.

Change Will Come Whether We Like It or Not

But the reason we see more success for these ideas is not just because it’s easier to find them and read them. We’re living in a time when people — especially young people — can see that the old ideas aren’t working any more.

The young generation has inherited a mess from the older generations, and the young can see that what they’ve been told isn’t true. It’s not true that you can just go to college, run up a bunch of student debt, and then get a good job. The young can see that the middle class is being destroyed by our current economic system. And they can see that our foreign policy is failing.

Whether we like it or not, change will come. The troops will come home. They probably won’t come home for ideological reasons, but simply because the United States is broke and can’t afford all its wars anymore.

If it is true that we’re in the midst of an end of an era, though, the question remains as to what’s going to replace the system we have now. There are still plenty of socialists — popular ones — who are out there saying that what we need is more government control and more war to fix the economy and the world. So, we still have a lot of work to do, but I think we’re in a better place now than we’ve been in a long time.

We Don’t Need a Majority

When thinking about all the work we still have to do, it’s important to keep in mind that we don’t need majority support. If you’re waiting for 51 percent of the population to say “I’m libertarian and I believe everything you say,” you’ll lose your mind. What we need for success is intellectual leadership in a country that can influence government and the society overall.

That’s where the progress is being made. We’re only talking about 7 or 8 percent of a country that is necessary to provide the kind of influence you need. This was the case during the American Revolution, and it’s true today. You are part of that 8 percent.

When doing this work, though, there are many things that can be done. People often ask me “what do you want me to do.” My answer is: “do what you want to do.”

There is no one way. Some people can use the political system, and others can go into pure education. Lew Rockwell started the Mises Institute, but what you do for the cause of liberty is personal to you, and you have to find what makes sense for you.

Also, you can’t know all the positive effects your work is having. I certainly had no way of knowing all these years how I was having an effect on those young Africans I met at the airport. You can’t always know what effect you’re having either.

So, say that we are successful, and our 7 or 8 percent continues to gain influence. What should we be doing? I think there are three basic places we need to start.

First off, we would see to it that there would be no income tax in the United States ever again.

Second, we would take the Federal Reserve and all its leadership and relegate them to the pages of history.

We would then pass a law that the US government cannot commit any crime that it punished other people for. It’s wrong to steal and hand people’s property over to other people, no matter how much people who do that win the applause of others.

And finally, we would bring all the troops home. Randolph Bourne was right when he said that war is the health of the state. Peace is the friend of liberty and prosperity.

As a final note, I’d like to say that humility and tolerance need to be an important part of our efforts.

Yes, we need a foreign policy based on humility. We can’t know what’s right for people around the world, and we certainly shouldn’t force anything on them.

But right here at home, we need humility also. In fact, libertarianism is based on humility. We can’t know what’s best for other people. No one can, and that is why we want people to have the freedom to do what they think is best for themselves.

This is true in economics, of course. Do you think Janet Yellen knows what the “correct” interest rate is? There are many things that economic planners can’t possibly know. And for that reason — and others — there are so many things they shouldn’t be doing.

And yes, there are a lot of people out there living their lives in ways we might disagree with. But intolerance is what government is based on. The far left, they are very intolerant and are happy to have people with guns tell other people how to live.

We need to keep in mind that if other people aren’t hurting us or using government to force their way of life on us, they should be left alone.

Unlike the left, we want tolerance for other people’s morals and for how other people work for a living and what they choose to do with their money.

We need more tolerance and humility in every aspect of life, and that’s how we get a free society.

So, let’s all go to work and preserve the cause of liberty.

Thank you very much.