Why Everything Is Dirtier 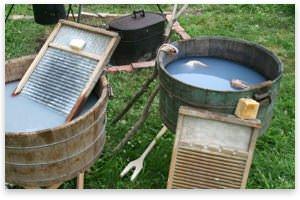 I'm old enough to have a vague memory of clothes so white that they were called bright. This happened despite the absence of additives — the ridiculous varieties of sprays and bottles and packets that festoon our cabinets today and that we throw into the wash to try to boost the cleaning power of our pathetic machines and increasingly useless laundry soap.

Then, the other night, I experienced an amazing blast from the past. I added a quarter cup of trisodium phosphate (TSP) and otherwise "treated" nothing. The results were nothing short of mind-boggling. Everything was clean — clean in a way that I recall from childhood.

Next came my confrontation with the local dry cleaner, which I've used for years. I explained what happened and how puzzling it is that by using TSP I was able to clean my clothes more thoroughly and perfectly than his commercial service.

He was not shocked. He completely agreed, though sheepishly.

I pointed out that TSP, which is a natural element, is amazing not because it cleans — it needs soap to do its thing — but rather because it rinses, whooshing away all dirt, oil, stains, as well as all leftover detergent. Bleach whitens but it ruins fabrics, and that's not good. What is needed is a good rinsing agent that leaves clothes not only perfectly clean but also smelling fantastic. TSP does it, and that's why it has long been an essential ingredient in laundry soap.

Once again, he agreed.

It is not "commercially viable," he said.

How can this be? It is not expensive. It is freely available at the hardware store in the paint section. If something works, the laundry service pleases its customers more. That means more business and higher profits. Isn't the goal to clean clothes well and do a good job for customers?

Yes, true, he said, but, again, TSP is not "commercially viable." He politely deferred all further questions to the Dry Cleaning and Laundry Institute, whose website provides no information at all to nonmembers. However, the Laundry Institute did answer my email:

It is true that trisodium phosphate produces cleaner laundry.

Bingo. Cleaner laundry. Cleaner than what? Anything else. Not "commercially viable" means that governments will no longer permit laundries to clean your shirts. You can add TSP at home — government hasn't restricted that yet — but commercial houses cannot. However, the Laundry Institute did say that "there are other ways to achieve a clean shirt." What are they? He didn't say. He said: "you will have to do some leg work to find a cleaner that meets your needs."

My needs? My needs are for clean clothes, same as the laundry needs of the whole of humanity since the beginning of time. The whole purpose of laundries is to meet that need.

Here's the problem, however. The goal of the regulators who regulate the laundry is not to improve your life. It is to wreck your life a bit at a time by pressing increasing numbers of restrictions and mandates upon private producers.

One of these mandates has removed TSP from detergent — and with catastrophic results. No one wants to talk about this. There is a major hush-hush culture here because business, understandably, doesn't want to face a consumer backlash, and government doesn't want to acquire the reputation for being the civilization wrecker that it truly is.

These kinds of regulations are capable of driving an entire industry into the ground, as people with the intense desire for clean clothes — the very people who are willing to pay for laundry services — increasingly resort to home cleaning and ironing. An entire step in the structure of production is eliminated, as laundry autarky replaces the division of labor, which is the driving force of cooperative human effort.

It's no wonder that the industry wants no talk of this problem. Its very raison d'être is under attack. If laundries can't clean clothes, they have to shut down.

Does government care? If you read between the lines in the almost-candid moments of government statements, you can see what is going on here. In 2009, Clive Davies, a product engineer with the EPA, granted an interview with the New York Times that focused on home products. You might wonder what a product engineer is doing working for the government rather than the private sector. This interview shows why. Every one of the questions he is asked concerned the effect of home products on the environment. Not even one actually probed the essential question of whether the products actually work.

Mr. Davies's job is to decide whether to affix a supposedly valued designation to products: Designed for the Environment. It's pretty clear that anything that actually cleans, washes, or scrubs probably can't earn the designation. An empty box that claims to be detergent stands a better chance of gaining the government seal of approval than a detergent that actually works.

Then we get to the end of the interview, in which he is actually candid about the goal: the elimination of detergents (meaning the elimination of clean). Davies concedes that this would be the best possible result. And what does he recommend instead? Vinegar and "elbow grease" — the old-fashioned phrase for "scrub harder."

Thus spake the government. That's the future as these bureaucrats see it. It's a future of elbow grease, meaning manual labor unassisted by any products of free enterprise like machines and detergents that work.

It's a future in which our clothes are dirty, we have no soap that works to wash our bodies, our dishes are full of gritty film, our floors are grungy, our windows are smudgy, everything more or less stinks like vinegar, our toilets don't work, our trash is hurled in a pile out back, and vast amounts of our time are spent scrubbing things instead of reading, singing, writing, or conversing. It is a future just like the long-ago past, complete with wash tubs, wash boards, and outhouses — along with their attendant dirt, disease, and deprivation.

"It is a future just like the long-ago past, complete with wash tubs, wash boards, and outhouses, along with their attendant dirt, disease, and deprivation."

My own enlightenment on this issue came within the last year. Like millions of others, I had forgotten what a clean dish looked like. Dish-washing soaps, with no big announcement, eliminated phosphate from their formulas under pressure from the EPA and laws from state governments that banned them. The idea was to help the fish in their oxygen competition with algae (even though the household contribution to algae creation is negligible, and the scientific evidence on the issue of algae's effect on fish runs in all directions).

The main issue here is that Americans (Europeans too) are having their living standards systematically degraded by regulators who apparently hate our modern conveniences like dishwashers and want to drive us ever more into an impoverished state of nature.

And don't tell me that phosphate-free dish soap works just as well. It's a laughable claim. If you buy some phosphate and add a tablespoon to the load, you enter a new world once the washer is finished. Things are actually clean like you might remember from childhood. The glasses gleam, the plates squeak, and there is no oily film on all your dishes. You don't have to buy new dishes and you don't need a new washer. You only need to add back what the regulators took out. You don't need Consumer Reports. The difference is perfectly obvious, and anyone who claims otherwise is insulting our intelligence.

The sales of new home appliances have soared over the last 12 months, according to industry reports. The data are not broken down by type, but I'm willing to bet that quite a few dishwashers have been sold to unsuspecting customers who had no idea that the real problem was with the detergents, not the machines. Hardly anyone I have spoken to has understood this problem, but all confirmed the fact that their dishes are not getting clean.

Getting even less attention was this ban on TSP in laundry soap that took place in the early 1990s, apparently codified in a 1993 law. The idea, or the excuse, was to stop the increased growth of algae in rivers and lakes (phosphate is a fertilizer too), even though there are other ways to filter phosphate, home use contributes virtually nothing to the alleged problem, and there is no solid evidence that plant growth in rivers and lakes is a harm at all.

In any case, consumers gradually noticed that stains were becoming more stubborn than ever, and thus did a huge new range of products start appearing on the market. These products permit you to treat your clothes before you wash them. Today our cabinets are filled with such products — spray and wash, bleach pens, stain removers, boosters of all sorts — and we use them by the gallon.

Does anyone stop and wonder why such products are necessary in the first place, and, if they are so good, why aren't they in the detergent so that the whole of the load gets clean and not just the treated part? The reason, most fundamentally, is that the formula for detergent was changed as a result of government regulation.

The difference wasn't obvious at first. But as time has gone on, other changes began to take place, like the mandates for machines that use less water (as Mark Thornton writes about), along with mandates for tepid temperatures of water in our homes. In the end, the result is dramatic. It all amounts to dirty, yellowing clothes.

This is the exact opposite of what we expect in markets, in which products are ever better and cheaper due to innovation, expansion of the division of labor, and competition. But with government regulation, the results are deliberately the opposite. We pay ever-higher prices for shoddy results.

Do we see what is happening here? I can detect very little in the way of public knowledge, much less outcry. In the old Cold War days, I recall wondering how it was that the Soviet people could have put up with state-caused impoverishment for decade after decade, and wondering why people didn't just rise up and overthrow their impoverishers. Now I'm beginning to see why. If this all happens slowly and quietly, there is no point at which the reality of cause and effect dawns on people.

One final note on my conversation with my dry cleaner. He gave me the heads-up that the main ingredient used for dry cleaning, perchloroethylene, is not long for this world. California and New York are considering bans, and the rest of the country comes later. After that, it's all over, and the last one to leave civilization will have to remember to shut off the fluorescent light.

This is the whole trajectory of life under government control. They are the predators; we are their prey. And this isn't just about clean dishes and clothes. It applies to every regulation, every tax, every expenditure, every stupid war, and every monetary manipulation. Everything government does comes at our expense, and the costs are both seen and unseen.

How much will people put up with until they arrange for the regulators to sleep with the fishes?