First let me say that what we today call “Austrian economics” flows from the great legacy of classical economics, with the very important modification economists now call the “marginal revolution.” Austrian economics is also a term that describes a healthy and vibrant (though often oppositional) modern school of economic thought. It originated with intellectual giants like Carl Menger and Ludwig von Mises, names I’m sure many of you are familiar with. These economists were from Austria, hence the term.

There was a landmark conference at South Royalton, Vermont in 1974, attended by the likes of Murray Rothbard and Milton Friedman, that revitalized the Austrian movement and helped it regain prominence in the latter part of the twentieth century. Milton Friedman was in attendance, and that’s when he famously remarked that “There is only good economics and bad economics.”

And of course that’s true. Schools of thought should not be rigid, or dogmatic, or too narrowly defined. But classifying various economists and theories into groups or family trees does indeed help us make sense of economics. It helps us understand how we arrived at a time and place where Ben Bernanke, Paul Krugman, Thomas Piketty, and Christine Lagarde are viewed as modern mainstream thinkers rather than the radicals they are when compared to the whole history of the field. 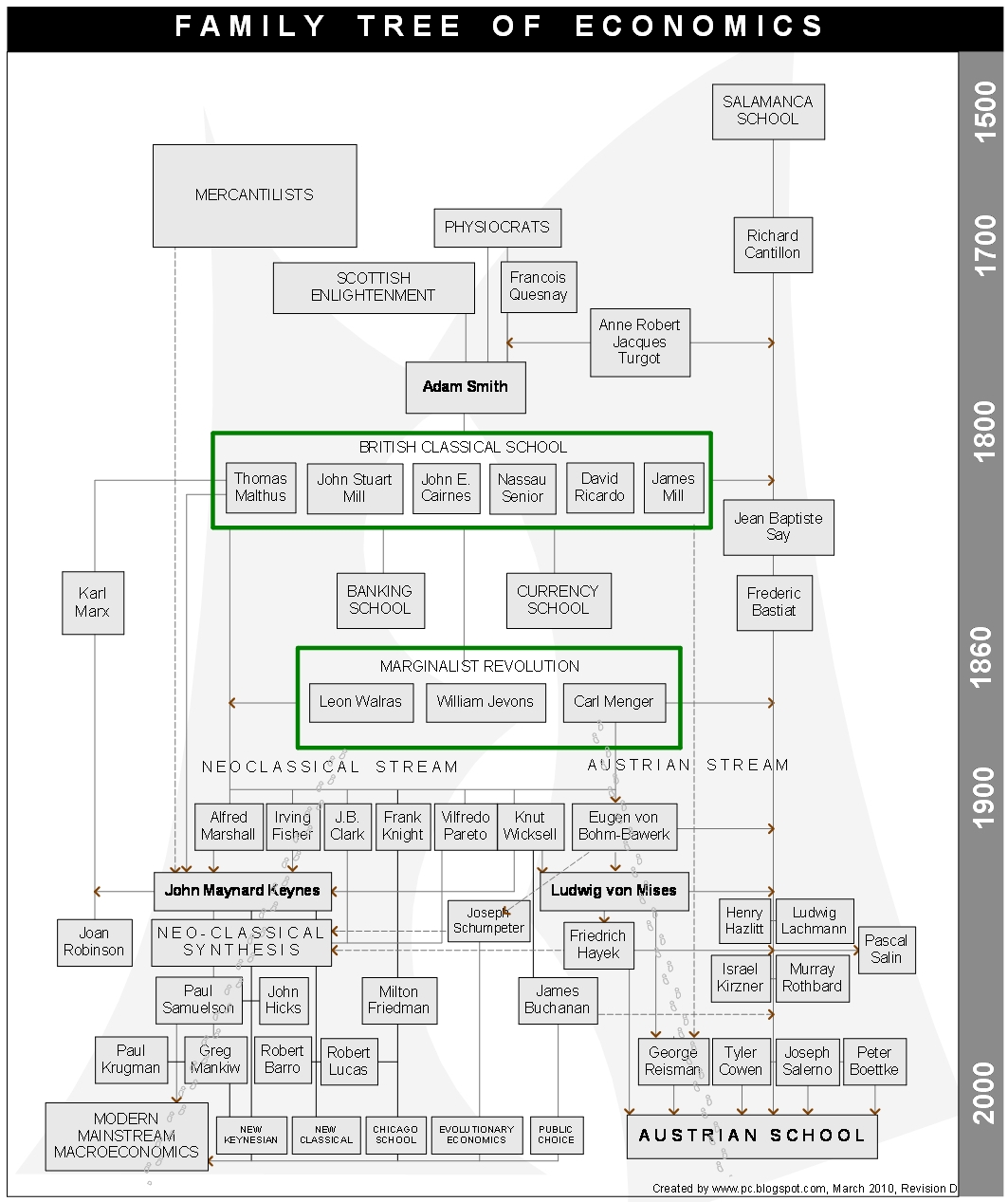 We supplied some photocopies that roughly trace the history of economic thought. Notice the split in the 1930s, not coincidentally during the Great Depression, between Mises and John Maynard Keynes. Up until then, from about 1850 forward, Austrian economics was mainstream economics. But as you can see, most of today’s mainstream economists fall somewhere under the umbrella of Keynes, and they tend to focus on variants of Keynes’s ideas about aggregate demand.

But at least they focus on something!

Ignorance of Economics Is not Bliss

Which leads me to my topic today: “Why Any Economics Matters.” I say “any” because at this point the entire subject appears to be lost on the average American. Economics is not a popular topic among the general population, it would seem. When economics is discussed at all, it’s in the context of politics — and politics gives us only the blandest, safest, most meaningless platitudes about economic affairs.

Bernie Sanders or Hillary Clinton simply are not going to talk much in economic terms or present detailed economic “plans.” On the contrary, they — will assume rightly — that most Americans just don’t have any interest beyond sloganeering like “1%,” “social justice,” “greed,” “paying their fair share,” and the like.

Candidates on the Right won’t be much better. They’d prefer to talk about other subjects, but when they do broach economics they’re either outwardly protectionist like Donald Trump or deadly dull.  Who is inspired by flat tax proposals?

Americans simply aren’t much interested in the details, or even the accuracy, of the economic pronouncements of the political class. We want bread and circuses.

Not much, ladies and gentlemen, in the way of economics. And I submit that might be a very healthy thing. After all — we’re rich! Only a wealthy society does not have to focus on the subsistence-level concerns of adequate food and shelter, hot running water, clothing, electricity, and the like.

So let’s not be too hard on people for not spending their free time reading economics. Leisure itself is a very important activity, and represents a form of economic trade-off.

But economics matters very much, and we ignore it at our own peril. Economics is like gravity, or math, or politics — we may not understand it, or even think about it much, but it profoundly affects us whether we like it or not.

Economics as a subject has been captured by academia, and academics like Krugman are not so subtle when they imply that lay persons should leave things to the experts. It’s like team sports — we may be introduced to it when we’re young, but only the professionals do it for a living as adults.

While we shake our heads when twenty year olds can’t read at the college level or do simple algebra, we don’t worry much whether they never take economics. We would be alarmed if our children couldn’t perform basic math to know how much change they should get at a cash register, but we send them out into the world far more susceptible to being cheated by politicians. Why do we want our kids to learn at least basic geography, chemistry, and physics? And grammar, spelling, literature, history, and civics? We want them to know these things so they can navigate their lives properly as adults

But somehow we’ve come to believe economics should be left to academics and policy wonks. And worse yet, we don’t protest when kids grow up to become adults with little or no knowledge of economics, yet still have strong opinions about economic issues.

Ignorance of basic economics is so widespread that we ought to have a specific word for it, like we have for illiteracy or innumeracy.

The aforementioned Murray Rothbard had this to say:

It is no crime to be ignorant of economics, which is, after all, a specialized discipline and one that most people consider to be a “dismal science.” But it is totally irresponsible to have a loud and vociferous opinion on economic subjects while remaining in this state of ignorance.

I’m sure we’re all familiar with this phenomenon on social media, which seems perfectly suited to vociferous unfounded opinions.

Let’s consider the minimum wage issue, as one example that’s been in the news lately:

Wages are nothing more than prices for labor services. When the price for something rises, demand drops — and you have more unemployed people than you otherwise would. Pure and simple Econ 101.

Yet what percentage of Americans today have even seen a downward sloping demand chart in a high school or college class?

It is this great and widespread ignorance of economics that plagues our ludicrous political landscape. It allows politicians to attack capitalism, and make demagogues out of entrepreneurs. It allows politicians to blame free markets for the very economic problems caused by the state and its central bank in the first place — like the dot com implosion, like the housing bubble, like the Crash of 2008, like the unsustainable equity prices commanded by US stock markets today.

In short, ignorance of economics allows some very big falsehoods to be accepted as fact by large numbers of people. And it’s only going to get worse as the presidential election of 2016 unfolds.