GET NEWS AND ARTICLES IN YOUR INBOXPrint
A
A
Home | Mises Library | When Money Dies: Germany and Paper Money After 1910 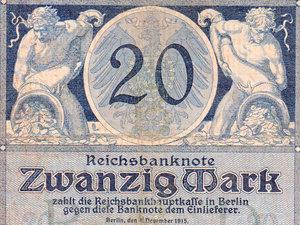 The story of the destruction of the German mark during the hyper-inflation of Weimar Germany from 1919 to its horrific peak in November 1923 is usually dismissed as a bizarre anomaly in the economic history of the twentieth century. But no episode better illustrates the dire consequences of unsound money or makes a more devastating, real-life case against fiat-currency: where there is no restraint, monetary death will follow.

"It matters little that the causes of the Weimar inflation are in many ways unrepeatable; that political conditions are different, or that it is almost inconceivable that financial chaos would ever again be allowed to develop so far," wrote British historian and MP Adam Fergusson in his 1975 classic, When Money Dies. "The question to be asked — the danger to be recognized — is how inflation, however caused, affects a nation."

The US Federal Reserve of 2014 is not the Reichsbank of 1914. Yet today's policy mindset is dangerously reminiscent of the attitudes that helped to excacerbate the economic downfall of inter-war Germany. These include: the unrestrained financing of budget deficits under war and post-war conditions; the unaccountable creation of the money supply by a central bank; the creation of undisciplined credit linked to this expansion of the money supply; the aggressive inflating of asset values; the discounting of short-term treasury bills and notes in practically unlimited amounts; rapid currency depreciation, and a ratio of federal debt to GDP over 100 percent.

Prior to World War I, the German mark, the British shilling, the French franc, and the Italian lira were all valued around the same — about four each to the dollar. By the end of 1923, the rate for the mark was one trillion to a dollar — one million-millionth of its former self. In mid-1922, a loaf of bread cost 428 million marks, while the entire equity capitalization of Daimler Corporation bought the equivalent of 327 of their cars. In November 1923, that which before the war could have purchased, in theory, 500 billion eggs could, that infamous month, procure but one egg.

Former Prime Minister Henry Lloyd George, writing in 1932, remarked that words like "catastrophe," "ruin," and "devastation" were not enough to describe the situation, given the common usage into which such words had fallen. Looting, vandalism, theft, the rise in prostitution, famine, disease, the consumption of dogs; people robbed of their clothes on the street — all were routine events of the "bourgeois" social quotidien. The constant threat of civil war loomed, as did neighboring Bolshevism. Bavaria had to declare martial law.

The Rise of Paper Currency after 1910

The 100 trillion note was then issued and the presses of the Reichsbank were printing money to the record tune of 74 million million million marks a week. Rather than stop this madness, the Reichsbank continued to print more money, claiming that it was keeping employment steady, and promising the population that relief was always just around the corner. An atmosphere of civil chaos reigned.

The Versailles Treaty was not the main culprit: it only worsened a bubble-blowing monetary policy in place prior to the war. Before 1914, the credit policy of the Reichsbank dictated that not less than one-third of the currency issue had to be covered by gold. But once paper currency became legal tender in Germany in 1910, such currency became a reckless expedient.

By the outbreak of war, most of the world had given up the gold standard and had gone over to paper money. The commodity was withdrawn from circulation and was largely piled up in the vaults of a few central banks, but mainly that of US: from August 1913 to August 1919 the US stock of monetary gold in the US increased by 65 percent.

Back in Germany, massive bond issues were sold appealing to mass patriotism in order to pay for the war. Private fortunes were transferred into paper claims on the state as the Reichsbank suspended the redemption of notes into gold. Loan banks were established that printed money at will and banks gave out unconstrained credit to advance money for war-bond subscriptions. The most ominous measure for the future was that which allowed the Reichsbank to include three-month treasury bills in its currency coverage such that unlimited amounts could be rediscounted against banknotes.

In contrast, Great Britain handled financing the war far more prudently: London met the cost of war by raising taxes aimed primarily at those industries and groups that best stood to profit from the war.

In Germany, gold was depleted paying for war reparations and as a result of the French invasion of the Ruhr. Yet only gold provided occasional relief to citizens at large when a handful of industries were able to issue small gold marks to pay employees. Höchst Dye Works, for example, paid workers from the 400,000 Swiss francs it had stashed in Swiss bank reserves.

Germany Turns to the Rentenmark

At the breaking point, monetary policy was taken out of the hands of the Reichsbank via what was effectively a coup d'etat by Chancellor Gustav Stresemann. All loans to the government were cancelled. Monetary policy was decentralized. The state was rigorously separated from economics.

A parallel banking structure was organized by a prominent non-governmental economist-maverick who came up with a new currency scheme first backed by rye-bread —the most coveted value at the time —and later gold, once that commodity could be procured again. Those "gold-backed" notes, the Rentenmarks, were guaranteed by mortgages on landed property and by bonds on German industry in the amount of 3 billion gold marks.

In reality, there were practically no gold reserves left. Yet, the incalculable social and psychological effect upon the population in announcing a return to currency with gold parity on a one-to-one basis calmed social tensions and jump-started economic stabilization immediately.

"The genius of the Rentenmark is that it released the Reichsbank from having to finance the government," writes Fergusson. Rigorous discipline of state expenditure followed, as well as the refusal of further credit to the government, and the eventual return of the mark to parity between gold and the dollar. For many years afterward, gold mark clauses in long-term obligations were characteristic of the German capital market.

Today's conditions are not Weimar conditions. But there are unsettling parallels in terms of monetary policy and the inflation money and credit. Since President Nixon abandoned the gold exchange standard in 1971 up through 2003, the supply of money in the US increased by 1,100 percent. The Fed's balance sheet, ballooning from $500 billion in 2000 to $4.4. trillion at the end of 2013, has been the result of money printing.

"In a few years time, most of the world will be as sick of managed paper currencies as it was twelve years ago. The main trouble will be that popular ignorance and lethargy, coupled with selfish special interests, forces politics into the management of economics and the management of economics into politics. Politically speaking, the world is yet far from being ready for managed paper currency standards."

These words were written in 1932 by the American economist Edward Kemmerer, one among the clearest arguments against fiat-currency ever written. "No gold, No printing" history tells us: the most important monetary lesson that central banks, once upon a time up through the present day, refuse to learn.