When the FDA Declared War on a Texas AIDS Patient 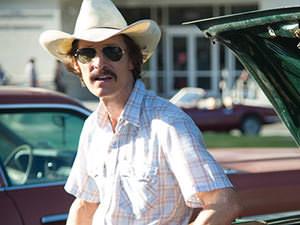 The Dallas Buyers Club is based on a true story about Ron Woodruff (McConaughey), a redneck, heterosexual Texan who contracts the HIV virus in the 1980s. There is lots of sex, drugs, drinking, homosexuals, and even transsexuals, in addition to great acting, so be warned, this movie is not for everyone. However, it teaches us many lessons about how the state and its agents work.

This is an anti-government movie that exposes the true relationship between the American Medical Association and Big Pharma, and reveals it as a crony capitalist network that exploits Americans, and especially their health. The hero is just an ordinary guy and the heroine is just an ordinary doctor who comes to realize the widespread fraud within the American medical establishment, and stands up against it.

(Spoiler Alert: The rest of this article contains spoilers.)

Our hero, Ron Woodruff, ends up in the hospital and learns that he has contracted HIV. This stunning revelation starts him searching for the causes and cures for HIV-AIDS. While researching the disease he comes across information that the drug AZT might offer a cure. It just so happens that the pharmaceutical company that has the monopoly on AZT has just finalized a deal to begin the first human clinical trials, coincidentally, at the hospital where Woodruff is being treated.

To be fair, the FDA did “fast track” the human trials because of public uproar, but the FDA still bars our hero from access to AZT. Woodruff begins by buying stolen AZT, but his access to local AZT is eventually cut off.

Woodruff’s search for AZT takes him to Mexico where he finds a doctor, formerly from the US, who tells him that AZT alone is poisonous and ineffective and that it is actually harmful because it destroys good and bad cells in your body. The doctor shows Woodruff research that supports his claim and tells him that he treats his HIV-AIDS patients with a combination of vitamins, minerals, natural supplements and other medicines that can help improve health and slow the progression from HIV to AIDS. All the individual components of the doctor’s treatment are considered safe by the FDA. Unfortunately, the treatment as a whole is unapproved for treating HIV-AIDS, and the FDA forbids doctors from prescribing them in such cases.

Our hero gets the idea that he can buy large quantities of these supplements and medicines in Mexico, where they are legal, and resell them in the US for a profit. Of course he is stopped and harassed by the Border Patrol and the FDA. Eventually he forms the Dallas Buyers Club and sells memberships so that people can obtain these products without breaking the law.

Woodruff is further harassed by the IRS and the FDA who attempt to shut down his business. The movie shows the concoction of supplements and medicines as being largely effective in keeping HIV patients healthy and alive. In contrast, the HIV patients in the AZT trials are failing badly, getting sick, and dying at an alarming rate.

Woodruff discusses what he has discovered and the results he has seen with club members with his US doctor. She is already alarmed by the results of the AZT trials and eventually puts all of her asymptomatic patients on the lowest possible dosage. She then approaches the director of the hospital about her concerns over the widening failure rates of the hospital’s clinical trials of AZT. He dismisses her concerns, declaring the research a success and refuses to allow her to see the written report. Eventually, the hospital asks her to leave her position.

The science behind the treatment is not the focus of the movie. The focus is on the crony-capitalist relationships that exist within the American health care system, and the power they wield in stifling a person’s right to consume what they want and treat themselves as they see fit.

Near the end of the movie Woodruff has brought a lawsuit against the FDA to be allowed to determine his own medical treatment. The judge laments that the law can be a very counterproductive and unethical tool in areas where the government has taken control, such as the determination of health care. The judge rules in favor of the FDA and dismisses the case.

The American Medical Association is a monopoly-cartel for doctors (that not all doctors agree with) that dictates the range of health care and treatment options. Pharmaceutical companies are also monopolies that have patents on the drugs and devices they invent. The FDA reinforces these monopolies by requiring extremely expensive and sometimes unnecessary testing, and compliance regulations that can run more than $1 billion for each new drug or device.

Such procedures prevent many drugs from coming to market in the US despite being successfully used in other countries. This “failure to approve” helps market incumbents and hinders new competitors. It also harms consumers by depriving them of treatment options, driving up the cost of health insurance.

One industry insider told me that there is a whole new category of medicine that improves detection of diseases, more effectively treats, cures, and prevents medical problems, and does so cheaper and with fewer side effects, but the research companies can’t get past the FDA hurdles.

One thing the movie does well is show how those in charge of these monopoly organizations have little concern for peoples’ welfare, and how real doctors and patients are unable to effectively fight the system. It also depicts the police, the IRS, and border agents are the enforcement arm of this crony capitalist system.

Most people never see the American medical establishment exposed for what it is. Dallas Buyers Club shows the system at its very worst, a crony capitalist combination of the profit motive armed with the vast enforcement power of the federal government.