GET NEWS AND ARTICLES IN YOUR INBOXPrint
A
A
Home | Mises Library | What's So Great about Representative Government?

What's So Great about Representative Government? 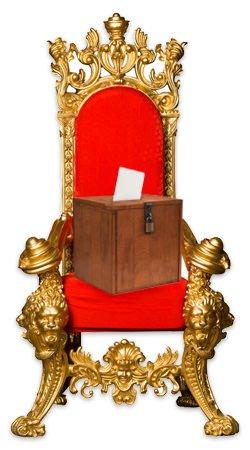 "A simple democracy … is one of the greatest of evils." — Benjamin Rush, signer of the Declaration of Independence

"Remember, democracy never lasts long. It soon wastes, exhausts, and murders itself. There never was a democracy yet that did not commit suicide." — John Adams

"Democracies have ever been spectacles of turbulence and contention; have ever been found incompatible with personal security, or the rights of property; and have, in general, been as short in their lives as they have been violent in their deaths." — James Madison

Facts ruin — as they so often do — a perfectly good theory. A cursory vetting of the evidence reveals that elected representatives are no more deliberative, nor sapient, nor any less rapacious than the plebeians whose vote they seek. It is understandable, really: the plebeians, theoretically and in fact, are the ultimate judge of all ideas and the source of all power; thus, they demand a representative who excels in nullity and mediocrity in order to best reflect majority opinion.1 The plebeians demand a mirror, even if it is cracked.

Indeed, the representatives, whose very charge is to deliberate the issues as agents, have long ago abdicated their charge to the labor-saving wonders of delegation: our elected representatives employ tens of thousands of bureaucratic committees and myrmidons to consider and enforce that which they either cannot or will not consider and enforce. The consequence — intended or not — is a government able to invade every crevice of private life while allowing elected representatives to live an unaccountable, leisurely, gerrymander-assured existence.

If our elected representatives at least trudged their own water, physics would serve as a limiting agent: 535 elected representatives and 24 hours in a day set a natural boundary on legislative shenanigans. And for all the pooh-poohing of pure democracy by our founding fathers, a pure democratic vote would only tighten the boundary. Even if the plebeians know nothing about everything put before them, time, logistics, and costs would attenuate the number of legislative afflictions.2

As Hans-Hermann Hoppe has so pointedly noted, democracy is owned by no one. But neither is representative government. Both are marked by infantilized societies: time preference shortens, and current consumption trumps wealth-producing capital formation; hence, tax burdens increase, government debt swells, and inflation persists. Lower savings, legal uncertainty, moral relativism, entitlement, impulsiveness, and obesity are the corollary. The commentariat pensively asks why our government cannot save or plan. It simply can't.

The king demanded a tribute, but not much of one. During the monarchical age, the share of government revenue remained remarkably stable and low. Economic historian Carlo Cipolla notes,

All in all, one must admit that the portion of income drawn by the public sector most certainly increased from the eleventh century onward all over Europe, but it is difficult to imagine that, apart from particular times and places, the public power ever managed to draw more than 5 to 8 percent of national income.

As for the level of tyranny, it could ebb and flow with the king's whim but it mostly ebbed. Tocqueville observed,

There was a time in Europe in which the law, as well as the consent of the people, clothed kings with a power almost without limits. But almost never did it happen that they made use of it.

Sure, the king could have decreed that you not smoke, not ingest too much salt, not cut hair without a license, or not use more than 1.6 gallons of water to dispose of human waste, but he simply did not give a damn, unlike today's elected representative, who is more Gladys Kravitz than statesman.

The king was a capital owner in his domain, and he acted like one. Only an idiot would risk lowering the value of his property while raising the possibility of regicide over mindless minutia. And if the king was an idiot, plenty of courtiers and sundry relatives were in waiting to set him straight.

Admittedly, the legitimacy of monarchical rule has been lost to Western societies' insurmountable belief in the common man, but, unbeknown to Western societies, so has the legitimacy of representative republicanism (at least it has been lost to anyone who values freedom and liberty). The West has been too inculcated in the corrosive ways of egalitarianism to rebuild itself. Today's government-funded geneticists and sociologists are keen to prove, with an impressive array of data and formulations, that all men are naturally equal — and if some are more equal than others, then the difference is attributable to nurture, not to nature.

How untrue. Men are naturally unequal, as a casual conversation with any neighbor, acquittance, or business associate soon reveals. The natural order of a free society — predicated on voluntary private-property transactions — is hierarchical and elitist. Diverse human talents (we are unique, after all) dictate that a few individuals rise to the status of an elite. But elitism always conjures jealousy in the mediocre majority, so the elites and their natural talents are tamped down by the tyranny of egalitarianism.

Instead of repressing the talents of the elites to assuage perceived slights, we should let them flourish, as we should all flourish, sans the stifflingly political rigmarole of democracy and representative republicanism. No more of this "get-out-the-vote" nonsense for inchoate, ungracious 18-year-olds and multigenerational welfare recipients whose only purpose for voting is to vote themselves more of someone else's property. Only a system directed, as Frank Chodorov so eloquently put it, by "men of high purpose [who] give of their talents for the common welfare, with no thought of recompense other than the goodwill of the community," can sustain prosperity and freedom.3

Benjamin Franklin not only turned a sharp eye on democracy; he kept a wary one on representative government as well. "When the people find they can vote themselves money, that will herald the end of the republic," he is said to have warned.

The truth is, we have been heralding the end of the republic since the republic began, but the pace has quickened to a gallop in recent decades. It has never been a question of if Western-style representative government will collapse, but only a question of when. We need only to peer east toward Western Europe to see that when is no longer a distant conundrum left to torment unborn generations. When is very much upon us today.