What You Must Read About the Great Depression 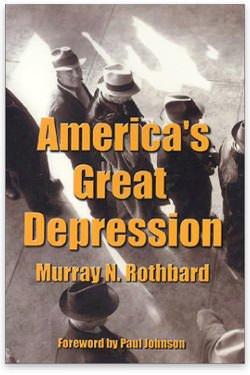 02/22/2009David Gordon
The single most important book on the Great Depression." – David Gordon

In the present recession, advocates of government intervention often evoke the specter of the Great Depression. Unless the government intervenes massively, we are told, we risk an economic collapse comparable to that of the 1930s. To see the fallacy of this claim, it is imperative to understand that government intervention both led to the Depression and prevented recovery from it. The following books, I hope, will assist those interested in grasping what happened in this vital historical era. When it appears, Robert Murphy's forthcoming The Politically Incorrect Guide to the Great Depression and the New Deal will no doubt be a notable addition to the list below.

Anderson, Benjamin, Economics and the Public Welfare. Anderson, the head economist of the Chase National Bank during the 1930s, gives a detailed contemporary account of the New Deal, as part of a history of American finance. He stresses the disastrous effects of Roosevelt's policies on business confidence. Excellent treatment of FDR's torpedoing of the World Economic Conference in 1933.

Flynn's The Road Ahead depicts the parallels between the New Deal and fascism; Flynn shows wide knowledge of both American and European conditions.

The Roosevelt Myth is a devastating portrayal of FDR. Flynn shows how the need to find outlets for government spending led to militarism and war.

Folsom, Burton, New Deal or Raw Deal. Shows that New Deal programs, far from helping the poor, actually burdened them through excise taxes on essential items. Also excellent on use of welfare payments and government jobs to secure votes for Roosevelt.

Garrett, Garet, Salvos Against the New Deal. Edited by Bruce Ramsey. A collection of contemporary articles by the great Old Right journalist, criticizing the New Deal. Particularly good on the effect of government programs on character. Garrett firmly advocates self-reliance. He writes in a unique, poetic style.

Hayek, Friedrich von, Prices and Production and Other Works. Edited by Joseph T. Salerno. The most elaborate statement of the Austrian theory of the business cycle. Particularly important for our purposes is the essay "The 'Paradox' of Saving," showing that a fall in consumers' spending need not lead to depression.

Mises, Ludwig von, The Causes of the Economic Crisis. Includes a classic essay, written in 1928, that discusses the role of bank-credit expansion in causing the business cycle, as well as "The Causes of the Economic Crisis" (1931), showing that inflation during a depression will not succeed in ending unemployment. Only wage reductions in industries with an oversupply of labor can achieve this goal.

Malyi, Melchior, The Twilight of Gold. Strong criticism of the gold exchange standard of the 1920s and defense of the classic gold standard. Important criticism of Milton Friedman's contractionist view of the Depression. Palyi was the chief economist of the Deutschebank (1928–1933) and adviser to the Reichsbank (1931–1933).

Powell, Jim, FDR's Folly: How Roosevelt and His New Deal Prolonged the Great Depression. The title tells all. Very detailed account of Roosevelt's policies, showing their disastrous impact. Among the highlights are a discussion of the invidious effects of the AAA and an analysis of how Social Security caused unemployment.

Reed, Lawrence, Great Myths of the Great Depression. Good short summary of the free-market position on the origins and course of the Depression. Excellent analysis of the Wagner Act.

Robbins, Lionel, The Great Depression. Excellent application of Austrian business-cycle theory to the Depression, pointing to bank-credit expansion as the cause of the crisis. Unfortunately, Robbins later repudiated his own book, but he shouldn't have. Murray Rothbard thought very highly of this book.

Rothbard, Murray, America's Great Depression. The single most important book on the Great Depression. Rothbard explains Austrian business-cycle theory and criticizes rival theories. He applies the theory to America, showing how Benjamin Strong at the New York Fed promoted expansionary monetary policy during the 1920s. When disaster struck, Hoover's interventionist measures made matters worse. Stresses the continuity between Hoover and the New Deal.

Rothbard's A History of Money and Banking in the United States shows how the Federal Reserve's inflationist policy in the 1920s served the interests of the House of Morgan. The New Deal represented the triumph of the competing Rockefeller group.

Rueff, Jacques, The Age of Inflation. Argues that the world economic crisis of the 1930s stemmed in large part from the gold exchange standard. Calls for a return to the classic gold standard. See also the same author's The Monetary Sin of the West.

Schivelbusch, Wolfgang, Three New Deals: Reflections on Roosevelt's America, Mussolini's Italy, and Hitler's Germany. Draws parallels between the New Deal and fascism. Schivelbusch emphasizes the quest for architectural spectacles designed to overawe the masses and gives a good account of the coercive aspects of the NRA.

Shlaes, Amity, The Forgotten Man: A New History of the Great Depression. Very well written account of the personalities behind the New Deal. Stresses Roosevelt's penchant for experimentation. Excellent discussion of Schechter v. United States (1935), which held that parts of the NIRA were unconstitutional.

Smiley, Gene, Rethinking the Great Depression. Shows how Roosevelt's interventionist policies led to a "depression within the depression." Argues that World War II did not end the Depression.

Vedder, Richard and Lowell Gallaway, Out Of Work: Unemployment and Government in Twentieth Century America. This book shows that the prolonged unemployment during the 1930s stemmed from government and labor-union programs to prevent wages from falling.