What the Nazis Borrowed from Marx 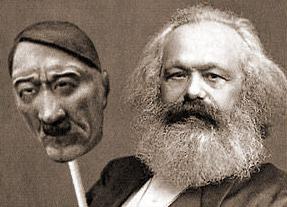 The Nazis did not invent polylogism. They only developed their own brand.

Until the middle of the 19th century no one ventured to dispute the fact that the logical structure of mind is unchangeable and common to all human beings. All human interrelations are based on this assumption of a uniform logical structure. We can speak to each other only because we can appeal to something common to all of us, namely, the logical structure of reason. Some men can think deeper and more refined thoughts than others. There are men who unfortunately cannot grasp a process of inference in long chains of deductive reasoning. But as far as a man is able to think and to follow a process of discursive thought, he always clings to the same ultimate principles of reasoning that are applied by all other men. There are people who cannot count further than three; but their counting, as far as it goes, does not differ from that of Gauss or Laplace. No historian or traveler has ever brought us any knowledge of people for whom a and non-a were identical, or who could not grasp the difference between affirmation and negation. Daily, it is true, people violate logical principles in reasoning. But whoever examines their inferences competently can uncover their errors.

Because everyone takes these facts to be unquestionable, men enter into discussions; they speak to each other; they write letters and books; they try to prove or to disprove. Social and intellectual cooperation between men would be impossible if this were not so. Our minds cannot even consistently imagine a world peopled by men of different logical structures or a logical structure different from our own.

Yet, in the course of the 19th century this undeniable fact has been contested. Marx and the Marxians, foremost among them the "proletarian philosopher" Dietzgen, taught that thought is determined by the thinker's class position. What thinking produces is not truth but "ideologies." This word means, in the context of Marxian philosophy, a disguise of the selfish interest of the social class to which the thinking individual is attached. It is therefore useless to discuss anything with people of another social class. Ideologies do not need to be refuted by discursive reasoning; they must be unmasked by denouncing the class position, the social background, of their authors. Thus Marxians do not discuss the merits of physical theories; they merely uncover the "bourgeois" origin of the physicists.

The Marxians have resorted to polylogism because they could not refute by logical methods the theories developed by "bourgeois" economics, or the inferences drawn from these theories demonstrating the impracticability of socialism. As they could not rationally demonstrate the soundness of their own ideas or the unsoundness of their adversaries' ideas, they have denounced the accepted logical methods. The success of this Marxian stratagem was unprecedented. It has rendered proof against any reasonable criticism all the absurdities of Marxian would-be economics and would-be sociology. Only by the logical tricks of polylogism could etatism gain a hold on the modern mind.

Polylogism is so inherently nonsensical that it cannot be carried consistently to its ultimate logical consequences. No Marxian was bold enough to draw all the conclusions that his own epistemological viewpoint would require. The principle of polylogism would lead to the inference that Marxian teachings also are not objectively true but are only "ideological" statements. But the Marxians deny it. They claim for their own doctrines the character of absolute truth. Thus Dietzgen teaches that "the ideas of proletarian logic are not party ideas but the outcome of logic pure and simple." The proletarian logic is not "ideology" but absolute logic. Present-day Marxians, who label their teachings the sociology of knowledge, give proof of the same inconsistency. One of their champions, Professor Mannheim, tries to demonstrate that there exists a group of men, the "unattached intellectuals," who are equipped with the gift of grasping truth without falling prey to ideological errors. Of course, Professor Mannheim is convinced that he is the foremost of these "unattached intellectuals." You simply cannot refute him. If you disagree with him, you only prove thereby that you yourself are not one of this elite of "unattached intellectuals" and that your utterances are ideological nonsense.

The German nationalists had to face precisely the same problem as the Marxians. They also could neither demonstrate the correctness of their own statements nor disprove the theories of economics and praxeology. Thus they took shelter under the roof of polylogism, prepared for them by the Marxians. Of course, they concocted their own brand of polylogism. The logical structure of mind, they say, is different with different nations and races. Every race or nation has its own logic and therefore its own economics, mathematics, physics, and so on. But, no less inconsistently than Professor Mannheim, Professor Tirala, his counterpart as champion of Aryan epistemology, declares that the only true, correct, and perennial logic and science are those of the Aryans. In the eyes of the Marxians Ricardo, Freud, Bergson, and Einstein are wrong because they are bourgeois; in the eyes of the Nazis they are wrong because they are Jews. One of the foremost goals of the Nazis is to free the Aryan soul from the pollution of the Western philosophies of Descartes, Hume, and John Stuart Mill. They are in search of arteigen German science, that is, of a science adequate to the racial character of the Germans.

We may reasonably assume as hypothesis that man's mental abilities are the outcome of his bodily features. Of course, we cannot demonstrate the correctness of this hypothesis, but neither is it possible to demonstrate the correctness of the opposite view as expressed in the theological hypothesis. We are forced to recognize that we do not know how out of physiological processes thoughts result. We have some vague notions of the detrimental effects produced by traumatic or other damage inflicted on certain bodily organs; we know that such damage may restrict or completely destroy the mental abilities and functions of men. But that is all. It would be no less than insolent humbug to assert that the natural sciences provide us with any information concerning the alleged diversity of the logical structure of mind. Polylogism cannot be derived from physiology or anatomy or any other of the natural sciences.

Neither Marxian nor Nazi polylogism ever went further than to declare that the logical structure of mind is different with various classes or races. They never ventured to demonstrate precisely in what the logic of the proletarians differs from the logic of the bourgeois, or in what the logic of the Aryans differs from the logic of the Jews or the British. It is not enough to reject wholesale the Ricardian theory of comparative cost or the Einstein theory of relativity by unmasking the alleged racial background of their authors. What is wanted is first to develop a system of Aryan logic different from non-Aryan logic. Then it would be necessary to examine point by point these two contested theories and to show where in their reasoning inferences are made which — although correct from the viewpoint of non-Aryan logic — are invalid from the viewpoint of Aryan logic. And, finally, it should be explained what kind of conclusions the replacement of the non-Aryan inferences by the correct Aryan inferences must lead to. But all this never has been and never can be ventured by anybody. The garrulous champion of racism and Aryan polylogism, Professor Tirala, does not say a word about the difference between Aryan and non-Aryan logic. Polylogism, whether Marxian or Aryan, or whatever, has never entered into details.

Polylogism has a peculiar method of dealing with dissenting views. If its supporters fail to unmask the background of an opponent, they simply brand him a traitor. Both Marxians and Nazis know only two categories of adversaries. The aliens — whether members of a nonproletarian class or of a non-Aryan race — are wrong because they are aliens; the opponents of proletarian or Aryan origin are wrong because they are traitors. Thus they lightly dispose of the unpleasant fact that there is dissension among the members of what they call their own class or race.

On the other hand, what the Nazis call Western economics and therefore artfremd is to a great extent an achievement of men to whom even the Nazis cannot deny the term German. Nazi economists wasted much time in searching the genealogical tree of Carl Menger for Jewish ancestors; they did not succeed. It is nonsensical to explain the conflict between economic theory, on the one hand, and Institutionalism and historical empiricism, on the other hand, as a racial or national conflict.

Polylogism is not a philosophy or an epistemological theory. It is an attitude of narrow-minded fanatics, who cannot imagine that anybody could be more reasonable or more clever than they themselves. Nor is polylogism scientific. It is rather the replacement of reasoning and science by superstitions. It is the characteristic mentality of an age of chaos.