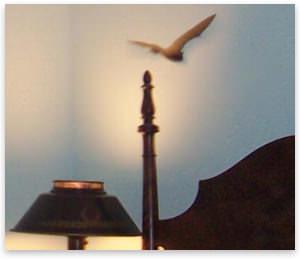 The upshot was that it was a bat, which, despite the prevalence of bat revisionism, is a spooky, nasty, disease-carrying, malicious threat to peace and contentment, made all the worse by its elusive, nocturnal habits.

But this wasn't at all obvious at first. It began as little more than a peculiar sound, noted by a visitor to our home. It sounded like a woodpecker but not as steady and sharp, so it couldn't be that. I dismissed the observation. Noises are everywhere. Not to worry.

The next night, at 1:30 a.m., my 12-year old daughter came running from her room, terror in her pale face, complaining that a bird was in her room. It was hitting the door and the wall so hard that it seemed like his bird skull would crack, or so she claimed.

Now, a bird in the house is not an unusual problem. It is just a matter of shooing it out the window. So on went the lights, and the mystery began: there was no bird. I moved objects around the room for 20 minutes and still no bird.

I concluded that she was dreaming, poor dear.

The next night the visitor came fleeing from her room at 1:30, complaining of the same. The signs were the same: wide eyes, white with terror, the look of someone who has felt an ominous presence. I turned off all the lights, open the door, and put the porch light on, on the theory that the bird would be attracted to light and fly away.

Now, all the clues were before me but it wasn't until after this commotion died down that the realization dawned on me. Let's see: mysterious noises, reports of a bird that flies at night but disappears when the light is on, the sense on the part of all who experienced it that they had been in the presence of something terrifying.

A bat! Now, we've been scolded for decades that bats aren't really that bad. They are clean and cuddly, like hamsters with wings. They don't rip your hair out: "Bats don't want to get tangled in your hair anymore than you want that to happen." And they aren't "likely" to be carriers of rabies. Umm, sure. So why do they fly with their mouths open exposing horrid teeth? Oh, that's just so that they can catch their dinner, silly! And then this site tells us that "Not all bats are vampires."

Yeah, well, to heck with these revisionists. If only 1 bat in 50 is a rabies-carrying vampire that gets tangled in one's hair, that's a good enough reason to treat them as grave threats. If they are indeed an endangered species, I'm not conducting any candlelight vigils.
(As an aside, someday someone will have to explain to me why, in the progressive/governmental view of the world, we are supposed to be deathly afraid of mercury, asbestos, and trans fats, but we are supposed to adore wolves, snakes, and bats!)

My plan for bat removal was that everyone should sleep with a tennis racket. When the bat comes around, whack it with the racket and, when it is disoriented, step on it and kill it. The kids pointed out that they would not be sleeping with hard shoes. So my workaround was to keep hammers in every room.

My daughter thought this was ridiculous and uncool. She googled around and came up with some alternative plan that she predicted would be infallible.

Everyone went to bed as normal, and so far as I knew, it was just another night. The next morning I learned what the night had actually brought. The bat came back. My daughter had been prepared with a specially made bat shield, a tupperware container, and a digital camera to snap images. The battle began at 1:30, in low light, and ended 15 minutes later.

The threat had been chased away and the family safe from the threat. Our homeland was secure! And of course she blogged all about it.

All during the great bat saga, there were politicians parading on television asking us to vote for them because they would do the best job of maintaining our nation's security against vague foreign threats to our well-being.

But this idea of "national security" is just about as mythical as the notion that some elected official with no fiduciary interest in our personal well-being can do anything to bring it about. Security is a microeconomic issue. Threats to person and property come in very precise forms. What gives us homeland security is not a swaggering occupant of the White House but locks on our doors, reliable insurance, a gun in the closet, or a daughter with a good technique for catching bats.

The key to feeling secure is good management of precise threats. The solution is carefully calibrated based on matching risk level, data of time and place, and making contracts with people who have an interest in bringing about the desired result. There is also a need for constant trial and error, since the nature of the threat is ever changing.

There is an interesting pattern to the problem of treating security as a macro-political problem rather than a micro-technical problem. Lew Rockwell reports that with every increase in the war on terror, the incidents of reported terror have increased.

Now, just imagine if you contracted with a company that promised to get rid of bats, and after six years, you had 14,000 bats in your house instead of the original 300. Would you consider this success? Would you gladly pay the bill for another six years? Would you believe the company's excuses for why the problem has gotten worse rather than better?

Not likely. But there is something about the idea of "national security" that compels us to take leave of our senses and not apply normal standards of success and failure.

And what if instead of making a contract with you, that same company stole the money from your bank account to pay itself for the services it was allegedly offering you? Under those conditions, you might rightly conclude their "service" is a worse threat to your security than the bats themselves. You would be right.