What Henry Hazlitt Can Teach Us About Inflation in 2014 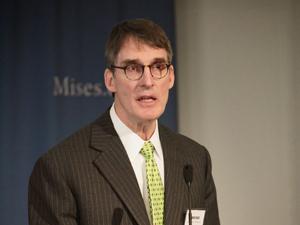 This article is adapted from a portion of the Henry Hazlitt Memorial Lecture, delivered at the 2014 Austrian Economics Research Conference by James Grant.

Believe me, ladies and gentlemen, when you stand at the pinnacle of financial journalism, you’re standing at sea level. There are exceptions to the rule, of course. The Victorian polymath Walter Bagehot, second editor of The Economist, was one. The twentieth century Americans Garet Garrett, John Chamberlain and — my old mentor at Barron’s — Robert M. Bleiberg were others. Each brought something extraordinary to the prosaic business of financial and economic reporting and commentary. Then there was Henry Hazlitt (1894-1991), author, critic, self-taught economist and visionary. I stand before you in the reflected glory of his reputation.

The author of Economics in One Lesson, a longtime columnist for Newsweek and an editorial writer for The New York Times in the distant, pre-Krugman era, Hazlitt waged a career-long battle against inflation. He was at it in 1946 — and he was still going strong in 1966. It may be well at this point to define terms — Hazlitt would have certainly wanted us to.

You have heard inflation reduced to the phrase, “too much money chasing too few goods.” It is an overly narrow definition. Inflation is too much money. What the redundant increment of purchasing power chooses to chase is variable but always mischievous. It varies from cycle to cycle.

In the past year, the world’s central banks have materialized — net — $1.9 trillion (net, for instance, of the substantial shrinkage of euros effected by the European Central Bank). They conjured it on their computer keyboards. It may help to grasp the meaning of this vast pile of scrip to note that it is more than the GDP of India. One hears constantly that these central bank effusions are merely helping us adjust to the “new normal.” I dispute it — and I’m sure that Henry Hazlitt would dispute it if he were here today.

“Deflation,” too, is a perennially misunderstood term. It is not — as one so often hears it defined — a simple decline in aggregate prices. Let’s try a mind experiment. Suppose you lived in a time of material and technological wonder: of digital technology that sets robots to work, makes universally accessible the canon of human knowledge (and, to be sure, of human error) and coordinates and arbitrages the world’s far-flung labor markets. As it costs less to make things, so it should cost less to buy them.

Would you call this happy state of affairs “deflation” — or might you call it “progress”? Most Americans seem to not to mind it, whatever the Federal Reserve chooses to call it. They spend half their weekends looking for it.

With this in mind, let’s hear from Hazlitt himself, master of economic clarity. Here he is in June 1946 — in the New York Times, no less — taking the government to task for its misplaced worry about a return to the 1930s.

“A Washington correspondent of the Wall Street Journal reports that the government economic experts are now convinced the ‘deflation’ and not inflation will be the big problem six months to a year from now,” Hazlitt began. “Planners of federal financial policy make no secret of their belief that the danger of post-war inflation was passed in late spring, and that from now on the greater danger lies in too-rapid deflation. Such a belief on the part of the government planners in Washington would not be surprising, the whole economic philosophy they have adopted leads them to believe that ‘the real danger is deflation,’ whatever the evidence may be on the other side.”

In 1946, as now, the government held up the threat of deflation to justify a policy of ultra-low low interest rates and easy money. Now ladies, and gentlemen, I have devoted thirty-one years of my life to writing about interest rates, and I have to tell you that I can’t see them anymore. They’re tiny. And so they were in 1946. Then, as now, the Fed had been conscripted into the government’s financial service. Just as it does today, the central bank pushed money-market interest rates virtually to zero and longer-dated Treasury securities to less than 3 percent. Just as it does today, the Fed had its thumb on the scales of finance.

Hazlitt urged the government to remove it:

“When interest rates are kept arbitrarily low by government policy, the effect must be inflationary,” he wrote. “In the first place, interest rates cannot be kept artificially low, except by inflation. The real or natural rate of interest is the rate that would be established if the supply and demand for real capital were in equilibrium. The actual money interest rate can only be kept below the natural rate by pumping new money into the economic system. This new money and new credit add to the apparent supply of new capital just as the judicious addition of water add to the apparent supply of real milk.”

Why, I could quote those perfectly formed sentences in Grant’s today (and I believe I just might). They’re as timely now as they were during the administration of Harry S. Truman. The effective federal funds rate has been zero for well nigh six years.

There is a doctrine in finance called the dividend discount model. It says that the price of a common stock is the present value of its future cash flows discounted by a suitable rate of interest. Now what would happen to the calculation of the value of that stock if the rate of interest were unsuitable — if it were artificial?

Hazlitt says this: “Excessively low interest rates are inflationary because they mean that bonds, stocks, real estate and unincorporated businesses are capitalized at excessively high rates, and will fall in value even though the annual income they pay remains the same, if interest rates rise.”

If interest rates were artificially low, it would follow that prevailing investment values are artificially high. I contend that they are, and you may or may not agree. But you must allow the observation that we live in a kind of valuation hall of mirrors. We don’t exactly know where our markets should trade, because we don’t know where interest rates would be in the absence of central-bank manipulation. Natural interest rates — free-range, organic, sustainable — are what we need. Hot-house interest rates — the government’s puny, genetically modified kind — are the ones we have.

Hazlitt understood the effects of these intrusions in the market. More than that, he was able to explain them in words so simple, yet so elegant, that the proverbial milkman in Dayton could follow his argument. What a remarkable man was he, and how well it would suit us all to live more closely to his example.