GET NEWS AND ARTICLES IN YOUR INBOXPrint
A
A
Home | Mises Library | What Gives Rise to Society?

What Gives Rise to Society? 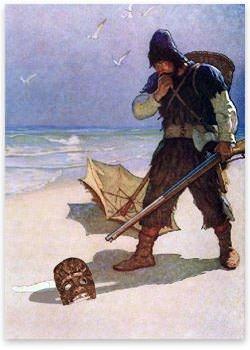 Robinson Crusoe is walking along the beach when he sees a little face looking up at him, half-buried in the sand. He digs it out, and finds that it is a little wooden statue of a pagan deity.

Friday is on the same beach, looking through a chest full of odds and ends that has washed up from a shipwreck. He finds a thick book with a cross on it. It is a King James Bible.

Later the two meet, see each other's finds, and agree to exchange them.

If the spirit of Aristotle were looking down from above, he might have (incorrectly) concluded from the exchange that the two goods were of equal value, reasoning that there would be no "exchange if there were not equality." [1]

On the other hand, the French statesman and economist A.R.J Turgot might have (correctly) concluded from the exchange that both parties must have considered the two goods to have been of unequal value: that Crusoe considered the Bible to be of higher value than the idol, and vice versa for Friday. This prerequisite for exchange is called a "reverse inequality of values."

Each would remain as he was … if, in his own mind, he did not consider what he receives worth more than what he gives. [2]

In other words, they would not have exchanged unless their respective scales of values looked like this:

Because with every voluntary exchange each party gives up a lower-valued good for a higher-valued good, every exchange is, by definition, mutually beneficial: a win-win situation.

Pleased by their increases in utility, Crusoe and Friday then look for other opportunities for exchange.

Although they have different amounts of each good, they have the same potential uses for them. And they happen to value the various uses in the exact same order.

Friday, with his 2 piles of timber, has only enough for his top-priority use for it (I). However, with his 5 piles of clay, he has enough for all of his above-listed uses for it (II, IV, VI, and VIII).

The two consider exchanging 1 stack of Crusoe's timber for 1 pile of Friday's clay.

Since both are willing, the exchange would occur, and both would benefit by it. After the exchange, their scales of value are as follows:

If Friday were to make the exchange, he would be giving up his ability to line baskets, but he would gain the ability to make a tool kit. As you can see from his scale of values, this would be a beneficial exchange for him.

Nonetheless, since Crusoe is unwilling, a completely voluntary exchange is impossible in this situation.

After being refused by Crusoe, Friday considers inducing an involuntary "exchange." After all, Friday is physically stronger than Crusoe, due to a lifetime of hunting and hard labor in the wilds. And let us say his conscience permits such a confiscation. Why give up any clay at all? And why not take all of Crusoe's timber?

If the possibility for mutually beneficial exchanges were due to one-time factors, and few future trades were expected, perhaps he would. In fact, he might never have recognized Crusoe's "property," and might have resorted to force at the very beginning.

But Crusoe's relative abundance of timber and dearth of clay, as well as Friday's relative abundance of clay and dearth of timber, were due to ongoing factors. Crusoe happens to be faster at gathering timber than Friday; plus, there are woods full of excellent timber on Crusoe's side of the island. Conversely, Friday happens to be faster at gathering clay than Crusoe; plus there is an excellent clay pit on Friday's side of the island.

Because of these factors, it is likely that, if both Crusoe and Friday continued to produce as before, there could be a perpetual series of opportunities for mutually beneficial exchanges.

And, because of their respective advantages, there would be even more opportunities for mutually beneficial exchange if Crusoe were to focus entirely on timber, and if Friday focused entirely on clay. This division of labor would be far more productive than their isolated labor has been.

This truly looks like the beginnings of a profitable partnership. But it would all be jeopardized if Friday were to take the timber Crusoe gathered against Crusoe's will. First of all, Crusoe might fight back, and Friday may have to kill him to get the goods. Or perhaps after being expropriated, Crusoe would sail off to another island. In either case, Friday would be "killing the goose that lays the golden eggs." And even if Crusoe were trapped and forced to gather timber for Friday, the productivity of his reluctant, resentful labor would inevitably plummet (especially when the costs and dangers of enforcement are considered).

Even without supposing any particular moral values on the part of Friday, it is more advantageous for Friday to treat Crusoe as the rightful owner of his timber, and to thereby preserve and intensify their division of labor, than it would be to resort to force. If Friday is aware of that fact, he will treat Crusoe accordingly.

This is true for all humans faced with a similar situation. As Ludwig von Mises wrote,

Every step by which an individual substitutes concerted action for isolated action results in an immediate and recognizable improvement in his conditions. The advantages derived from peaceful cooperation and division of labor are universal. They immediately benefit every generation, and not only later descendants. For what the individual must sacrifice for the sake of society he is amply compensated by greater advantages. His sacrifice is only apparent and temporary; he foregoes a smaller gain in order to reap a greater one later. No reasonable being can fail to see this obvious fact. [4]

And this is of profound importance, because human life is characterized by what Mises called the "universal law" of the greater productivity of the division of labor.

The greater productivity of the division of labor is universal because of what Mises called "the manifoldness of nature," [5] which Mises divided into two parts:

First: the innate inequality of men with regard to their ability to perform various kinds of labor. [6]

Examples of this are Crusoe's and Friday's different speeds at gathering timber and clay.

Second: the unequal distribution of the nature-given, nonhuman opportunities of production on the surface of the earth. [7]

Furthermore, even if Crusoe had been more productive with both timber and clay, there would still be an incentive for him to divide his labor with Friday. For example, if Crusoe were four times faster than Friday at gathering timber, but only two times faster than Friday at gathering clay, it would be more productive for Crusoe to let Friday specialize in gathering clay, so he would be free to focus on his "comparative advantage": gathering timber.

Any productive inequality between two parties makes for ongoing exchange opportunities and the greater productivity of the division of labor, the preservation and intensification of which make for the importance of social bonds.

If all men, and the resources that they had at their disposal, were the same, there would be no need for the division of labor or for social bonds.

Imagine if, instead of meeting Robinson Crusoe, Friday met another Kalinago Indian just like himself named "Saturday." Friday and Saturday have identical skills, and identical resources at their disposal. Furthermore, the course of events never changes this. Friday and Saturday each produce the same exact goods for the same exact purposes. They would, at all times, have the exact wants, and the exact same means to provide those wants. They would be of no ongoing use to each other.

If the earth's surface were such that the physical conditions of production were the same at every point and if one man were as equal to all other men as is a circle to another with the same diameter in Euclidian geometry, men would not have embarked upon the division of labor. [8]

In a world in which either (A) there were no greater productivity in the division of labor, or (B) there were, but man did not recognize it, there would be no impetus for the development of stable, lasting social bonds. Men would live either in complete isolation, or, if the means of subsistence were scarce enough (a likely prospect with economic autarky), in a constant state of war. Under such conditions, there would have been no occasion for the evolution of fellow feeling, the inculcation of moral values, or the development of a legal code.

On the other hand, as Mises wrote,

If and as far as labor under the division of labor is more productive than isolated labor, and if and as far as man is able to realize this fact, human action itself tends toward cooperation and association; man becomes a social being.…

The factor that brought about primitive society and daily works toward its progressive intensification is human action that is animated by the insight into the higher productivity of labor achieved under the division of labor.

This is why Mises called the division of labor "the fundamental social phenomenon" and "one of the great basic principles of cosmic becoming and evolutionary change." [9] He saw it as so crucial in explaining the progress from beasthood to savagery, from savagery to civilization, and from civilization to the world-embracing market society, that he rechristened "the law of comparative advantage" as "the law of association." The higher productivity of the division of labor, along with the capacity of man's reason to perceive it, is the primordial font from which sympathy, morality, law, and society itself all spring.