Water Subsidies and Shortages in the American West 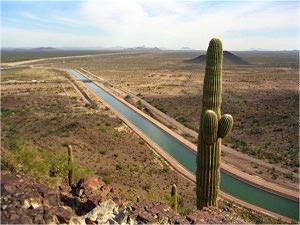 The Los Angeles Times reports that the West is running out of water. Articles about water shortages are a perennial feature of local newspaper coverage in the American West, but the Los Angeles Times is right. The West really doesn’t have enough water to maintain the status quo.

It’s not global warming or suburban sprawl that is the primary source of the problem. Indeed, the West is no more dry now than it has been at various times through the centuries for which we have a little knowledge about the climatic conditions here. And suburban and urban residents use only a fraction of the water consumed in the West.

To find a clue about the real source of the problem, we need only look to the Times article itself:

Thanks to reservoirs large and small, scores of dams including colossi like Hoover and Glen Canyon, more than 1,000 miles of aqueducts and countless pumps, siphons, tunnels and diversions, the West had been thoroughly re-rivered and re-engineered.

In an America without the massive coercive power of the federal government, the population centers in the West would generally be near the water sources where irrigation and drinking water would be cheaper and easier to use. When powerful interest groups own land far away from water sources, on the other hand, there is no “solution” so impractical that billions of taxpayer dollars can’t make it happen. The politicians will simply see to it that the water is moved where the lobbyists tell them it should have been in the first place. The result is that farmers will grow water-thirsty crops in central Arizona and central California where water must be transported over mountains and across hundreds of miles of arid landscape.

Water shortages occur in the West not because too many people are flushing their toilets too often, but because agriculture, heavily subsidized through cheap water made possible by the federal government, continues to grow crops in places that would never support agriculture on a similar scale in a free market. Indeed, agriculture uses well over 80 percent of all the water used in Western states, and most of that water is stored, pumped, and diverted using dams, pumps, and aqueducts paid for by the U.S. taxpayer.

As a result, growers don’t have to face the real-life costs of transporting water to their farms. They only need consider the subsidized price, which is far below what it would be in a private market. Consequently, water usage for growers across the West is much greater than what it would be were there a functioning market for water in the region.

While there are some historical cases of locally-funded major water projects, such as the original Los Angeles Aqueduct, the management of water resources in the West has been dominated by the federal government’s Bureau of Reclamation. Although created in 1902, the Bureau exploded in size and importance during the Great Depression as a part of the New Deal. From Hoover Dam to countless smaller dams and diversion projects, the Bureau became an influential bureaucracy with immense power in the West.

Naturally, the fact that taxpayers pay for all this does not mean that the taxpayers control the water. The most important resource in the West is in fact mostly controlled by Congress and the Bureau of Reclamation, and indirectly by growers and other special interests. Water is distributed in the West not by markets and market prices, but by the political process.

No private firm would distribute a precious commodity like water in a desert in the way that the Bureau of Reclamation has done it. While the subsidized farms in the West are private, the federal government owns the main input that is needed for their crops: water. Thus, the term “private enterprise” here is meaningless, since the farms are wards of the state.

The fact that many farms are “wards of the state” as Anderson calls them, does not trouble the more influential growers much, as agricultural interests remain extremely influential in Western states, and they indirectly control most of the water.

What is the justification for such a situation? The virtues of subsidized water are sung using the usual arguments for corporatism and crony capitalism. We’re told that what’s good for the Western farmer is good for America. It’s a matter of national security. Local economies will collapse without agriculture. Subsidized water “creates jobs.” It’s a way of life that must be preserved. And so on.

The political support behind the growers’ continued use of the vast majority of the water resources to grow cotton and pecans in a brutally-hot parched desert is a classic case of politicians supporting what is seen over what cannot be seen.

We can look out over the vast fields of crops in central California and Arizona, where few crops could grow before the federal government taxed families and workers to make it possible, and claim that the alternative is unthinkable. The alternative, of course, is unknown and unseen.

The hundreds of billions of dollars spent over the years to get water to growers and other politically well-connected interests could have been spent on other things. What other things? We’ll never know now, but the Central Arizona Project, which pumps water up 3,000 vertical feet and moves it across 160 miles of desert from the Colorado River to central Arizona at a cost of at least $4.7 billion, would probably not be one of them. Most of that is paid for by people who will never live in Arizona.

Although the special interest groups don’t see it this way, the fact remains that the development of the West, dictated by water, has been dominated by the federal government and its friends for at least 75 years. It props up industries unsuited to the realities of the Western deserts, while populations rely more and more on a diminishing resource controlled by an aging infrastructure of taxpayer-funded boondoggles. Is it any surprise that the West now faces some serious water problems? In spite of this, there is one thing we can know for sure: we’ll be told that the federal government is our best hope for solving the problem.