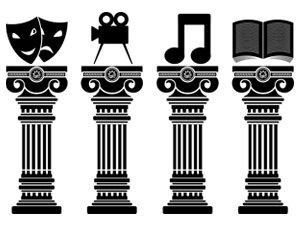 Aphorist Don Colacho once wrote that “a cloud of incense is worth a thousand sermons.” He meant that a glimpse of beauty and an emotional connection with a religious ceremony is more effective and edifying than many a haranguing lecture from a homely clergyman. Similarly, H.L. Mencken maintained that a hilarious lampoon was more memorable and fruitful than any number of serious and logical essays.

Colacho and Mencken were hardly alone in drawing such conclusions, and we do know from experience that for the average person, a good story, told through a novel, play, or film is far more likely to significantly affect his or her views of economics and human nature than is any well-footnoted and didactic tome.

Edward Younkins, business professor at Wheeling Jesuit University understands this as well as anyone. In his new book Exploring Capitalist Fiction, Younkins examines 25 works of fiction, whether novels, plays, or films, and pulls out the economics, property, and labor issues involved in each.

Some of the works examined here will be familiar to readers, such as Rand’s Atlas Shrugged, Miller’s Death of a Salesman, and Fitzgerald’s The Great Gatsby. But Younkins puts together a canon of economics-themed fiction here and does not stop with works that are just still popular today. He also includes less-read works today that are nonetheless indirectly influential in our own time, such as Sinclair Lewis’s Babbitt, which gave us the concept of babbittism, the art of being a conventional and boringly-successful businessman, and Frank Norris’s The Octopus that perhaps set the tone for so much later fiction on the evils of allegedly-monopolistic corporations.

Contemporary readers will likely find Younkins’s later chapters most interesting where he covers Wall Street (1987) and its 2010 sequel, Wall Street: Money Never Sleeps. In the 1987 film especially, we find a fairly sophisticated examination of the role of the investor and the corporate raider in actually building value for the stockholders in a company. Wall Street’s Gordon Gekko (Michael Douglas) certainly is motivated by greed, as he explains in his famous ”Greed is Good” speech, but that greed leads him to seek to rid the company of lazy and ineffective managers who are bleeding the company dry and generally wasting resources.

Similar themes are explored in the play Other People’s Money and its film version (1991) that examines a situation in which the founders of companies are emotionally attached to their enterprises. In such cases, the founders may be shortchanging the stockholders, who are also the owners of the company. The role of “Larry the Liquidator” (Danny DeVito) in this case is to help the complacent stockholders demand they earn a return on their investment.

In Wall Street and Other People’s Money, we find a conflict between complacent managers and those who want to get the most for their money. In other words, it’s a conflict between those who seek to create something new, and those who are fine with the status quo. The one who pushes forward to make more and do more is often in the end a villain, or at least an anti-hero.

Of course, no examination of business in film would be complete without a mention of David Mamet, perhaps the greatest dramatist of kill-or-be-killed conflict among men and women. Although it is not true violence, the conflict of the marketplace can nonetheless be reminiscent of the bloody violence of the political world as seen in Wag the Dog (1997, co-written by Mamet) and private crime as seen in Heist (2001, directed by Mamet). While the salesmen of Glengarry Glen Ross might be happy to in fact kill each other, they must settle for putting each other out of business in the world of selling second-rate real estate.

Mamet examines this conflict with the usual aplomb, and in these conflicts we see why an understanding of economics in art is so very important. It is in these conflicts that moviegoers and consumers of popular culture (namely, almost everyone) form so many of their thoughts about the true nature of business and economics. It is through human drama and storytelling that one confronts the value judgments and personal conflicts that define real economic action in the real world.

I was left wanting more about Mamet from Younkins, and this is one of the reasons behind my central criticism of this book, which is that it leaves the reader looking for so much more. Much of Younkins’s effort is devoted to summarizing the contents of each of these works with an eye toward focusing on the most relevant economic aspects of each, including the interactions between laborers and owners, and customers and salesmen. Certainly, each section of this book assists the reader in identifying the relevant themes, but from there, Younkins does not delve deeply into these novels and films to identify previously-uncovered themes in the existing scholarship. Indeed, Younkins rarely examines the existing scholarship on these works at all. To be fair, it does not appear that it was Younkins’s intention to do this. We might look more upon Exploring Capitalist Fiction as a type of study guide for readers interested in becoming familiar with significant works of American fiction and film.

Moreover, anyone who teaches business or economics will find in Younkins’s book an extremely helpful guide to expanding one’s teaching beyond the usual non-fiction standards to connect with students on a level that goes beyond mere concepts and into the illustrations of how humans truly interact with the economic systems around them. In other words, this book will help instructors use art to improve instruction while helping students consume popular culture more insightfully.

At the University of Colorado, the Austrian economist Fred Glahe used to teach Economics and Film, a senior-year seminar that explored the economics themes found in films of all types, from 70s kitsch sci-fi film Logan’s Run to the 1980s Patrick Swayze vehicle Road House. “Economics is ubiquitous,” Glahe said. Indeed it is.