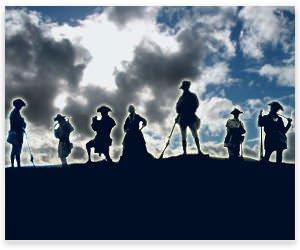 The American states had united in a voluntary federation; but there was no unified control, no overall plan.

This is just the opposite of the Old World pattern. In other nations, the overlords develop their ambitious plans, enforced by the firing squad and supported by huge predatory armies. These plans look fine on paper, but they are contradictory to the nature of human energy. They are always at the expense of individual initiative; they always result in oppression, leading to human degradation and war.

In America, the planning was to be done on a decentralized, or grassroots, basis. It was a new experiment. Free men were to have an opportunity to live their lives, plan their own affairs, and work with one another — not under the lash of coercive authority but under the discipline of enlightened self-interest and moral responsibility.

Thus it is that Americans were assured the flexibilities necessary to progress. Thus it is that always in these United States the unintended, the unpredictable, the apparently irrational, has seemed to carry us forward. Here are a few examples:

Consider the settlement of Kentucky, for which Richard Henderson and his land company were responsible. Any intelligent man in power would have stopped them in the interest of the general welfare. Kentucky was a wild and lawless country. Already growing too fast, it threatened rebellion against the United States and trouble with Spain.

But Judge Henderson went ahead, and with the aid of Daniel Boone, he organized his company and sold Kentucky land to settlers. He sold it on credit and would have made a tremendous fortune if the settlers had ever repaid him. The rambunctious Kentuckians drove off the installment collectors with guns. The Henderson Land Company went broke. But Kentucky was settled — a full hundred years ahead of schedule!

Consider the Louisiana Purchase, which extended the United States from the Mississippi to the Rocky Mountains. No one in authority had any intention of buying that land. The general feeling was that it was no good, and anyway, there was too much of it. Even the most forward-looking people saw the Mississippi as our permanent western frontier. The great river was a natural geographical boundary. Jefferson himself expressed the view that it would be another two hundred years (about AD 2000) before there would be any cities in the Mississippi Valley.

But Kentucky, as predicted, began to make trouble. The isolated western settlers threatened to join Spain, so that they could have a seaport on the Spanish-held Gulf of Mexico. Jefferson saw that the whole West — that is to say, the eastern half of the Mississippi Valley — would be lost unless the United States could get access to the Gulf. All that he wanted was a port, just one little bay.

But in Paris, two American commissioners — on the spur of the moment and without authority from Washington — bought the entire Louisiana territory for $15 million.

This wide expanse of territory really belonged to Spain, but Napoleon sold it and took a chance on his armies settling the matter with Spain.

Jefferson was aghast when he heard the news; and he came within an inch of repudiating the purchase. But the Louisiana Purchase became a part of the United States, and the expansion continued westward.

California was torn from Mexico in a surreptitious personal adventure of General Frémont — connived in by Senator Benton of Missouri, who sent him word to move quickly before he was stopped. At that time, no one dreamed there was gold in those foothills. Thoughtful men pointed out that California's soil was worthless because the United States already had more land than its citizens could use — that for centuries to come, the population on the Pacific coast would not be sufficient to provide a market for its farm products.

Everywhere you look in American history, you find examples of things seeming to happen by accident — without intention. Americans had no overall plan. They had something more important. They had personal freedom to plan their own affairs; and the avalanche of human energy resulting from that freedom swept from the Atlantic to the Pacific, from the Great Lakes to the Rio Grande. 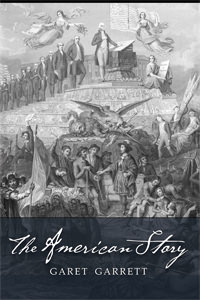 In 75 years, within a man's lifetime, France and Russia had vanished from the continent. England had been pushed back on the north. Spain had yielded the Floridas, New Mexico, Arizona, California, and Texas.[1]

The whole vast extent of this country had been covered by one nation, a tumultuous multitude of free men — men of heterogeneous races and creeds — living under the weakest government in all the world. The people who had been left to shift for themselves — who had learned the lessons of realism and learned them the hard way — were creating a new world and carrying forward the revolution that was beginning to shake the foundations of the Old World.

[1] I realize that the "Lone Star" state doesn't belong in this general grouping, With its own revolutionary leaders — its Austins, its Houstons, and its Ebenezer Foxes, who died to the last man in the Battle of the Alamo — the story of Texas parallels that of the United States. But since there isn't room in this book to do full justice to the Texans, we'll leave them to work out their own affairs — which, in common with the Cavaliers, they've always managed to do "with engaging gallantry and charm." Ditto California and at least two other states.

Henry Grady Weaver (1889–1949) worked as a mechanic, salesman, and draftsman before becoming director of customer research for General Motors. It was for that work that he was placed on the cover of the November 14, 1938 issue of Time magazine. He is best known for his work The Mainspring of Human Progress.