Tyranny and the Monopoly of Arms 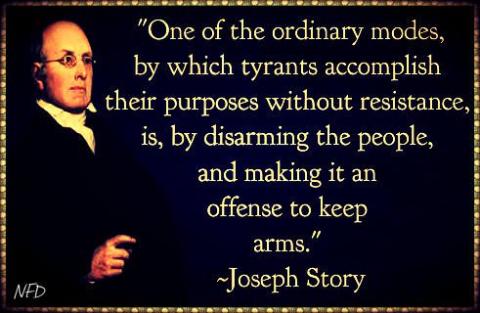 The indifference which seems to pervade many libertarian circles regarding recent gun control laws—laws which are likely to forge the final links on the chains shackled to the average American citizen—is dangerously surprising. Apparently no one perceives the importance of what has occurred.

Few realize the extreme shackles placed on actual or potential gun owners by the acts snowballing into the Gun Control Act of 1968 (Public Law 90-618). To purchase a gun one must make a sworn statement of identity, which is sent to the local police chief—who decides whether the applicant may own a gun on the basis of whether he is a “law-abiding” citizen (i.e., if he obeys every order of the power elite). Firearm ownership is denied to convicted felons, dishonorably discharged veterans, aliens illegally in the U. S., and former citizens who have renounced their citizenship, viz., all potential opposers of the Establishment. Users of “dangerous drugs” like pot, anyone under 21, as well as many others are also denied the right of ownership. Ownership of fully automatic, large caliber, or other firearms is absolutely prohibited to everyone but the State.

Even those qualified to own an arm are hampered by total registration, a fact unknown to the general public. Besides direct registration of newly purchased guns, “backdoor registration” of all other guns occurs due to the requirement that merchants record the name, address, etc., of all buyers of ammunition. These records are subject to police and Federal snooping. All producers and retailers are also fettered by high license fees and other outrages.

Some state and local governments have gone even more berserk. In many areas, anyone possessing a firearm is under constant harassment by the police. Complete registration, as well as the charging of atrociously high license fees, have left many with the necessity of surrendering their guns. The states of New York, New Jersey, and Illinois are particularly oppressive in this regard.

On the local level, the situation in Miami reads like a chapter from 1984. To apply for gun ownership, one must submit to the police extensive personal information. While at this point they have not gone quite as far as Rhodesia, where 32 blacks were recently sentenced to death for the “crime” of possessing firearms, anyone who is caught carrying a “dangerous weapon” without police approval gets a minimum of 6 months or $1,000 in fines. To help enforce these repressions, a $100 bounty is paid to anyone who is willing to squeal on his neighbor for firearms violations. Other cities are on the same road.

The ultimate goal of the power structure is the total abolition of private (non-ruling class) gun ownership. In mid-January 1969 the Illinois Academy of Criminology spoke favorably of this goal, and hundreds of other groups and individuals openly admit similar ambitions. The minimum they will settle for is complete police control of all firearms as is the case in Soviet Russia.

The masses are taught to believe the lie that such laws will reduce crime. Nothing could be further from the truth, because gun ownership by the general population simply does not cause crime. In 1966, twice as many guns per home were owned in Canada as compared with the U. S., yet the gun homicide rate of the former was only one-fifth that of the latter (American Rifleman, Aug., 1968, p. 46). And surely, if one wants to kill another, the absence of a gun will act as no safeguard; in Japan, where civilian guns are outlawed, the murder rate without guns is almost twice as high as the U. S. rate without guns (American Rifleman, Nov., 1968, p. 17).

On the contrary, gun ownership by the immense majority serves to prevent crime. Criminals have second thoughts regarding killing and plundering peaceful individuals who may be armed. But they have no hesitations when they are confident that their victims are helpless. Since criminals will always have guns (no criminals would register their guns, and besides, zip guns are easy to make), it is necessary that potential victims be able to arm themselves to prevent crime. Each month the American Rifleman, under the column “The Armed Citizen”, cites numerous instances in which private guns have prevented crimes.

Thus the avowed goal of State gun control is false. What, then, is the real reason why the power elite wants to leave the people defenseless?

It has already been observed that guns are necessary for peaceful individuals to protect themselves from criminals. But who has been the most ferocious criminal in history? It is obvious: the State!

The U. S. Government, though they trust themselves with the largest arsenal the world has ever known, including everything from napalm and M-16’s to tanks and H-bombs, will not trust its thralls with .22-cal. revolvers. Why does this trust not exist? The people want to be free, a great number of blacks as well as many non-ruling class whites desire self-determination, and the Establishment must frustrate these movements. Laissez-faire gun ownership is feared for the same reason that Hitler would have been afraid of a gun-owning Jewish population or Stalin a bunch of pistol-packing Ukrainians. Well does the State know Mao’s dictum: political power grows out of the barrel of a gun.” The rulers realize that the only way to retain their control over the people is to monopolize the firearms. The powers-that-be perceive that the people can never exercise their right to be free if they have no might to be free. Thus it is in part by gun control that Big Brother perpetuates his hegemony.

Besides those already mentioned, one of the most important steps taken by the U. S. Leviathan has been to forbid the importation into the U. S. of surplus military rifles. American gun manufacturers, including Winchester-Western, Remington, and Savage gave tremendous support to the passage of this act to prevent competition from old and low-priced but reliable foreign arms. The State’s motive is evident too: these inexpensive guns were within the buying power of everyone, and outlawing further importation prevents the many who cannot afford expensive American guns from acquiring a means of self-defense.

Understanding the political (or rather, the anti-political) utility of guns for the people, it is deplorable that the police can know who owns which firearms. But unless present trends are reversed, these quasi-private guns will not be around to worry about—they will be confiscated, leaving the people with no protection whatever.

There are few methods available to prevent this. The National Rifle Association has been a somewhat effective lobbyist in Congress to preserve the Second Amendment freedom to keep and bear arms, but it is likely that such efforts will only delay confiscation. The best mode available seems to be that employed by the people of Chicago last fall: only one-third of the city’s 1,200,000 firearms were registered in accordance with the ordinance requiring total registration, and of the two million gun owners in Illinois, less than one-fourth obtained the required license (American Rifleman, Dec, 1968, p. 6). Only mass civil disobedience can prevent Big Brother from totally disarming his serfs.